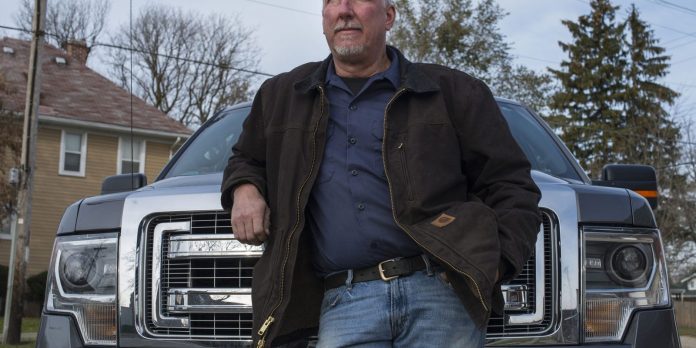 The new Rams are the most capable and luxurious pickups in their class.

Stephanie McRae leaned into the bed of her husband’s 1997 Ford F-150 to slide in an enormous pellet smoker for her son on Father’s Day, as grandson Kameron Runge watched.

“My husband is a delivery driver who works nights. He’s sleeping right now,” she explained in a Lowe’s parking lot in Fort Gratiot. It was her second trip to Lowe’s, having discovered the box wouldn’t fit in her 2014 Chevy Equinox earlier Sunday.

This is why America loves its pickup trucks.

The company is preparing to reveal to the world a redesigned 2021 Ford F-150 on Thursday. Ford has dominated pickup sales since the beginning of time. Still, the Chevy Silverado and Dodge Ram trucks have been in aggressive pursuit.

Stephanie McRae uses her husband’s 1997 Ford F-150 to pick up a pellet smoker from Lowe’s in Fort Gratiot on Sunday for Father’s Day. She said her husband would give up cable TV to keep his truck, but not coffee, no way. (Photo: Phoebe Wall Howard)

Now the so-called truck wars, which drive the biggest profits for Ford, General Motors and Fiat Chrysler Automobiles, is showing no sign of slowing. The F-Series dominates. It is commonly known as the Golden Goose for Ford, because the multibillion-dollar truck franchise within Ford North America generates revenue comparable to that at Facebook, Nike and Coca-Cola.

For millions of truck owners, the vehicles are as important to life as air and water.

People surveyed revealed that instead of giving up their truck for a year:

When it comes to her husband, she predicted, “The cable for sure. The coffee would never happen. He takes that by IV.”

But the truck study results didn’t surprise John McElroy, host of Autoline.tv and longtime industry observer, even a litlte bit.

“Pickup owners are the most loyal in the business,” he said. “You’ve probably seen the bumper stickers , ‘I’d rather push a Ford than drive a Chevy.’ It’s hopeless to try and get them to switch brands. To them that’s treason.”

Neighbors Jeremiah Parker and Anne DeHaven of Shoreham, Vermont each own F-150 pickup trucks. He is a retired restoration contractor. She manages a horse farm. (Photo: courtesy, Marcia Parker)

“As early as the mid-1920s, sociologists discovered that many working Americans were willing to cut back on food and clothing to make car payments,” said Anderson, curator of transportation at The Henry Ford museum. “… Our trucks and cars are our freedom. The recent COVID lockdowns only reinforced the idea that Americans consider mobility a birthright.”

Meanwhile, nearly one in five tattooed truck drivers have a tattoo of their truck, or related to their truck. And 25% of truck owners surveyed have named their truck.

Bradley Johnson, 71, a retired electrician, owns a 1994 Chevy pickup, a 2006 Chevy 2500 heavy duty and a 2017 GMC Sierra 1500 Denali. He and his wife, Jane, of Port Huron use their trucks to pull a large camper and travel the country. They, too, were found at Lowe’s after an unsuccessful search for a camper fridge.

Most folks have heard that you may not need to own a truck but you do need to know someone who does.

Data suggests knowing a truck owner is, in fact, essential:

Tim Gabriel uses his 2019 Ram 1500 Big Horn to pick up a new clothing dryer from Lowe’s on June 21, 2020. He says the truck is great for hauling children’s toys and things when it’s time to visit grandparents. (Photo: Phoebe Wall Howard)

Tim Gabriel, 37, a production manager, has helped friends move from house to house, hauled trailers, picked up store purchase for people whose cars are too small.

“This is my first pickup. I’ve wanted one for a long time,” Gabriel said, loading a clothing dryer into his 2019 Ram 1500 Big Horn with a V-8 engine. “Every time you park it, you look back at it because you love it so much.”

He added, “It makes trips to grandpa’s and grandma’s a lot easier to haul stuff with kids. That’s how I sold th wife on the idea. I was in a Jeep Grand Cherokee.”

This new survey is a slice of American life, said Mark LaNeve, vice president of U.S. marking, sales and service at Ford.

“I remember growing up, my dad was a steelworker back in Pittsburgh, and he had a friend who had a pickup,” LaNeve said. “He was, once a month, helping my dad do something. My dad always had a vegetable garden. They’d go down to my grandfather’s to borrow a rototiller, a big machine to chop the dirt, and he’d load the pickup truck with that heavy rototiller.”

Or his father’s friend would help deliver lumber to replace wooden planks on the outdoor deck. Or get needed supplies for garage shelving.

“These are the things Americans are doing all the time,” LaNeve said.

Mark LaNeve with his son, Drew, pictured here in 2019. LaNeve, vice vice president of U.S. marketing, sales and service at Ford, loaded up a 2019 Ford F-150 to haul things to his son at school in Iowa. (Photo: Mark LaNeve)

Not only does he have memories with his father, but now with this sons.

LaNeve, 61, and his wife, Paula, have fond memories of driving a 2019 Ford F-150 to Iowa City to visit their son Drew at the University of Iowa where he attended a special two-year program for students with learning disabilities. They took cases of water, which Drew wanted to keep under the bed, along with clothes and other supplies last year. More recently, the proud parents used a truck to pick up a dresser at Art Van to move Drew into a condo in Northville.

Mark LaNeve and his son Jake run errands to Sam’s Club together with the pickup truck now, too.

Jonathan  Klinger, vice president at Traverse City-based Hagerty, the world’s largest insurer of collector vehicles, said, “We are a truck-lovin’ society in America. People feel cool and powerful sitting up high. And, being able to tow or haul for yourself adds to the feeling of freedom and independence we all love.”

He emphasized, “The manufacturers figured this out a couple decades ago and have made it so that we no longer have to choose between luxury or utility. You can get  both in a truck.”

The truck study was conducted by Penn Schoen Berland, a global research and analytics firm. An estimated 38% of the respondents happened to own Ford pickups, which has dominated the market over the years. But the study also included a fair share of Chevy, Jeep and Toyota products.

These days, trucks command almost an “awe,” said Karl Brauer, former executive publisher of Kelley Blue Book. “That’s because they represent independent thought, independent living, capability, not necessarily having to follow all the rules. You have a truck, you don’t have to  go where the pavement is. You can go where you want.”

Trucks have evolved to become part of the American psyche, he said. “That’s why domestic automakers have made so much money on them.”

As E-Commerce Booms, Robots Pick Up Human Slack – The Wall...