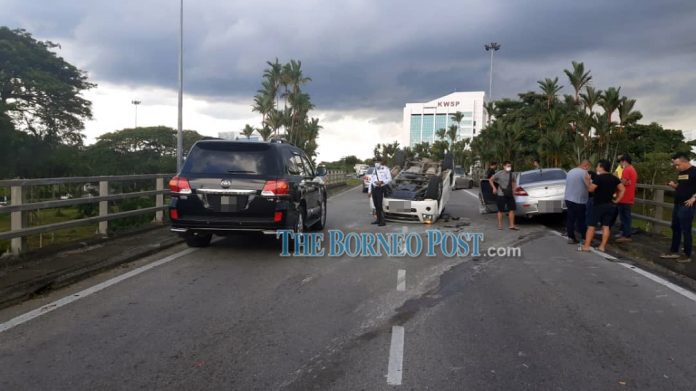 The scene of the accident at the Simpang Tiga flyover yesterday.

KUCHING: A pickup truck landed on its roof when it was rear-ended by another vehicle at the Simpang Tiga flyover here at around 3pm yesterday.

Sarawak Traffic Investigation and Enforcement chief Supt Alexson Naga Chabu said in a press statement today that both vehicles were heading towards Jalan Airport when they met with the accident.

“The pickup truck was driven by a 42-year-old man from Siburan who did not sustain any physical injuries,” said Alexson.

He said the other vehicle was driven by a 23-year-old woman from Sibu, who suffered bruises to her legs and was later sent to the Sarawak General Hospital for further treatment.

According to a police investigation, the driver of the pickup truck had slowed down and tried to stop by the side of the flyover due to mechanical issues.

This led to the accident as the vehicle driven by the 23-year-old failed to stop and crashed into it.

The pickup truck driver was later slapped with a police summons for obstructing traffic.