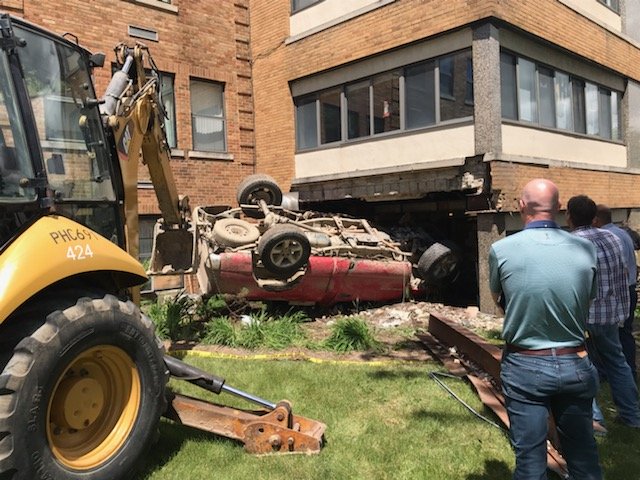 COLFAX TOWNSHIP, MI – On June 11th, 2020, at 11:22 p.m., the Huron County Sheriff’s Department and other agencies responded the Huron County Medical Care Facility on S. Van Dyke in Colfax Twp., which was the scene of a vehicle accident.

Deputies found that a 2008 Dodge pickup was eastbound when it left the roadway striking a gas main, then a tree and then ended up in the building’s chapel on its top. It was further learned that the driver and a young child had fled the scene and could not be found. It was certain though that one or both were injured. A puppy, that was believed to be injured, was also found. A good Samaritan took custody of the animal and sought treatment for it.

With the gas main leaking, gas company officials advised to evacuate the building. Fortunately the gas leak issue was quickly brought under control.

Deputies continued to check the area and the accident scene was cleared with the pickup remaining in the building. This was done in order so authorities could properly survey the damage to the building in the daylight.

Around 4:00 a.m., it was learned that the suspect driver and a 5-year-old boy had made it to the boy’s mother’s home in the Croswell area. Sanilac County Sheriff’s Deputies responded but the driver once again fled on foot.

Deputy Sgt. Neumann responded to that residence and learned the full identity of the suspect driver. He further learned the suspect had also stolen a vehicle to get out of the area from the Misty Meadows Trailer park, which was only a few miles west of the accident scene.

Apparently while fleeing from the scene, other vehicles at residences, along the way had also been stopped at in an attempt to find a getaway vehicle. Fortunately, the child hadn’t been injured in the crash but the 36-year-old man was.

Apparently the two had come to the area to purchase a puppy for the child.
Sgt. Neumann took possession of the stolen vehicle and it was towed back to county facilites to be processed for evidence. The boy was left with his mother.

Felony and other charges will be sought on the 36-year-old driver. The puppy was examined by a veterinarian yesterday morning and was be reunited with the little boy.

The pickup truck was removed from the building later that afternoon.

Other agencies responding were the Bad Axe Police, Bad Axe Fire, and Central Huron Ambulance. The Michigan State Police also joined in the search for the suspect later.

ODOT: Move over, slow down for workers