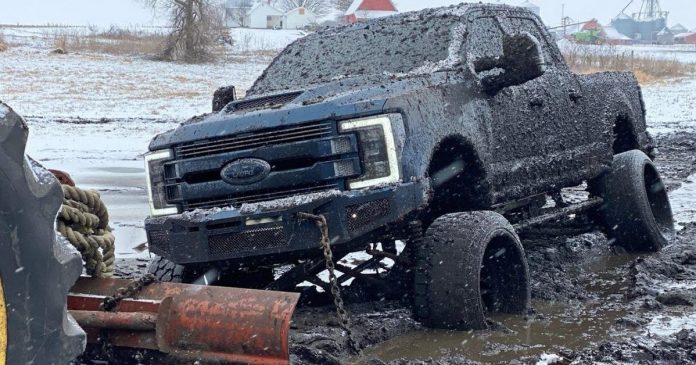 Pickup trucks were originally made for work. For decades, trucks were mainly perceived as utility vehicles. As years went by, an increasing amount of off-road action fans started modifying their trucks to either get down some southern style mud-bogging and western-style rock crawling. Over the last three decades, car manufacturers put an emphasis on developing trucks ready for some off-road action right off the lot.

RELATED: 5 Lifted Trucks And SUVs That Can Navigate Any Terrain (5 Lowered Ones That Are Built For Speed)

Even with the best engineers on the planet working on perfecting the art of car-making, some trucks just cannot handle the elements. It is quite common to see some of the most marketed trucks end up getting stuck in a little bit of mud. Though it is entertaining to watch, it becomes sad when a truck gets totaled following some Sunday off-road action.

Ford’s infamous “Built Tough” slogan has been the convincing indecisive truck fans for quite a while now. With the never-ending war between Chevrolet and Ford trucks, it is oftentimes difficult for truck fans to choose between the two car manufacturers. Though both Silverado and F-Series have their advantages and drawbacks, the F-Series by Ford has proved to be the preferred brand by truck users.

Being the best does not mean that failing is out of the question. This particular F-150 got stuck on a muddy trail that most mid-size trucks equipped with a qualified driver would have breezed through. It seems like the Tacoma or Buick SUV that got this F-150 out of trouble spit some mud on this F-150’s front end. The F-150 is a great truck though. Transitioning from a Civic to a real truck is not the easiest thing to do.

The Chevy Colorado ZR2 is the American version of the Toyota Tacoma. It is actually a better version of the Tacoma as it is more powerful and less of a common sight. As mid-size trucks are not very popular in the US outside of the Tacoma, it was crucial for a domestic manufacturer to release one of the most epic trucks out there.

It is hard to figure out whether this ZR2 AEV was set up there by a Tacoma owner or not. The truck is so clean that it really seems like its drivers just set it there for a photoshoot. If that was not the case, then it is safe to assume that the driver was a complete noob that had never set their hands on a truck. The Colorado is a mean and resourceful truck. Real mud-bogging fans out there sure are doubting this truck did actually get stuck.

The Toyota Tacoma is one of the most praised mid-sized truck on the market. Thanks to the reputation built by Toyota over the years and the actual reliability of its cars, the Tacoma ended up being of the most respected trucks in the US market. In comparison to other trucks of similar size, the Tacoma is definitely one of a kind.

It seems like the Fix Or Repair Daily (FORD) truck is getting the Tacoma out of trouble. Is not that something. Judging by the pictures, the driver of this 2017 Tacoma must possess as much off-road driving skills as a 12-year-old Forza Motorsport player. In all fairness, the Ranger is one of the up and coming trucks on the market. Combined with a respectable driver, the Ranger can trump the Tacoma.

7 Some People Should Not Drive

Ford F-250s are great large-sized trucks. Whether slightly lifted or slammed to the ground, the F-250 is the kind of truck that would knock your socks off. Even if the F-250 is an amazing truck, it does not change the fact that not anyone can get behind the wheel and be Evel Knievel.

RELATED: These Are The Most Legendary American Trucks Ever Made

The driver of this truck, as seen on the first picture, put himself in what could be described as a sticky situation. His back wheel is not touching the ground, which in turn will prevent him from creating any traction. It also seems like his lack of skills got the best of his front wheel. While his friends are staring at him making a fool of himself, he keeps on getting his beautiful truck in the worse situation ever.

The Isuzu D-Max is a cheap Japanese truck that is very popular in Southeast Asian countries, mainly because it’s cheap and reliable.

This particular D-Max was found on a beach in Phuket after its owner decided that the sound of the waves crashing on the shore was not enough. It is unclear how the truck was pulled out of the sand. It did make the local news though.

The rivalry between Chevrolet and Ford will never end. Never. If it does end, most automotive fans out there might end up feeling lost. After all, Chevy trucks are better than Ford trucks and Mustangs will always put Camaros to shame. True car fans will spend the next few days arguing with themselves on whether the last statement is true or not.

For once, the driver seems to admit that his skills were not as sharp as he believed. His defeated pose in the first picture shows that there is room for improvement. On the second picture, he is clearly showing that admitting that Ford is better is far less bad than getting stuck in the boonies. Good for you, buddy. Humility is the best thing to have in life.

4 Did Not Go As Planned

The Silverado 2500 HD is one massive truck. Lift it up, stick some sick looking rims and you will be the king of the road. Well, the Silverado is also an awesome truck to take off-road.

As the picture above depicts, the driver could not read their environment and ended up getting their wheel stuck in a manhole. It can be hard to tell where a manhole is located during a flood. However, if that is the case, why not checking your ego before you wreck your car and make a fool of yourself? Right.

The Ford F-350 is a beast. There is no room for debate. However, a lot of large-sized trucks seem to be modified just for customized car shows. It has been said for quite a while that some of these trucks are just “for show.” A YouTuber with deep pockets put a lifted princess to work.

RELATED: We’d Love To Own These Modified Ford Pickup Trucks

As expected, the chromed out Forgiato wheeled, polish Fox suspensions, hood vent having F-350 could not pass the test. The YouTuber put the truck through the most basic mud-bogging ever for a lifted F-350 and it miserably failed. Another fake mudder bites the dust.

The Ford Ranger has been popular overseas as the mid-size truck to go for. With the Hilux running out of steam since other brands are offering trucks that are just as good, the Ranger (especially the Wildtrack) has been gaining traction. No pun intended. However, similarly to the Raptor, the Ranger is not indestructible.

There seem to be a place in Australia that could be dubbed the truck graveyard. Mudlo Rocks has seen its fair share of poorly prepared and informed drivers over the years. Although it seems that most experienced drivers make it out of the beach before things get real, there is still a fair share of drivers going out there willing to void their insurance policy.

The Dodge Ram is one of the most iconic truck produced by Fiat-Chrysler Automobiles Group. Over the years, the Ram grabbed the world’s attention by being one of the meanest trucks on the market. Perhaps the most serious truck competing against Ford’s F-Series and Chevy’s Silverado, the Ram is known for being one of the toughest out there.

The driver of this Ram over-estimated his driving skills and the muddy terrain they were getting themselves on. Judging by the dried mud on the truck, the driver must have tried to get out this sticky situation but realized that the more they were trying, the worse it got. It is usually not a great sign when a truck’s wheels are halfway submerged in muddy water.

NEXT: 5 Pickup Trucks That Will Probably Get You Stuck Off-Road (5 That Will Hurdle Any Terrain)


Next
10 Forgotten Classic Cars That Are Actually Pretty Good