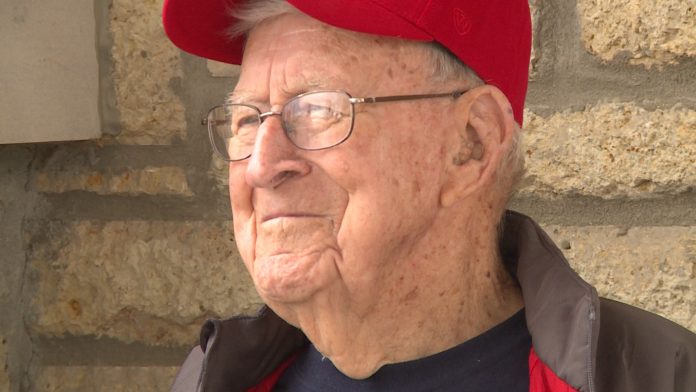 Tomter says it was the best birthday yet and that he is soaking it all up.

“I’ve got to say that it’s ever enjoyable to become really old. I’m having a ball! This is something so special. This tops everything.”

Tomter’s granddaughter Beth Warner says her grandpa is one-of-a-kind and recognizable by almost anyone in Trempealeau County.

“You can’t really summarize the guy. I mean clearly he’s an icon.”

“I talked with one of the members of the fire department way over a month ago before people were having fire truck parades because I knew that with safer at home issues, we weren’t going to be able to celebrate 103 years and that’s a big deal, so we kept it secret,” said Pigeon Falls Peace Lutheran Church Pastor Mary Ann Bowman.

Tomter, who is a World War 2 veteran, has made a big impact on the small town of Pigeon Falls.

“He is the only remaining charter member of the Pigeon Falls Lions Club, he was a founder of the fire department, he owned the Pigeon Falls General Store, he likes to say ‘if they didn’t have it, you didn’t need it’ and then after he sold the store, then he became a realtor and had ‘Reynolds Realty’ in town.”

The whole community waited for Tomter to ride by in the parade so they could wish him a happy birthday on Sunday.

“I’m thankful to be recognized,” said Tomter. “It’s a pretty special day. It’s a family affair. It’s just one big family. We’re a small community, everybody’s together and appreciate each other, help each other.”

Family and friends of Tomter say they wanted to give back the joy that he has always given them.

“I cannot say enough about how he has blessed my life along with, obviously so many others,” said Bowman.

“To have the relationship with someone who is so positive and such a light force and brings every single person he comes into contact with up is just an incredible blessing,” said Warner.

Tomter says the key to living a long life depends on your mindset.

How FC Dallas Traveled to Orlando for the MLS Is Back...