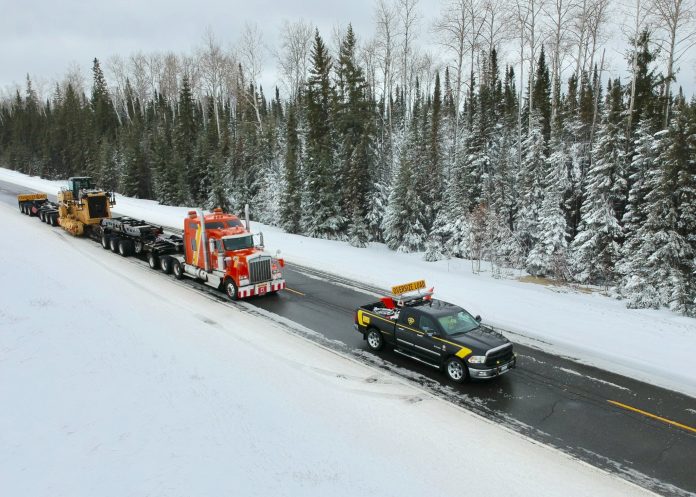 TORONTO, Ont. – It
helps move cargoes of any size and weight from anywhere to anywhere in North
America, but the pilot car industry remains largely unregulated.

In interviews this week with Today’s Trucking, stakeholders spoke of a multitude of problems, foremost among them the absence of unified rules in an industry that generates revenues of just under US$1 billion annually.

Ontario is the
only Canadian province that has a certification regime for pilot cars, known as
the Certified Superload Escort (CSE) program.

That means drivers escorting superloads must be certified. Carriers also have the option to use certified pilots in place of police to stop and/or direct traffic when necessary in the performance of their duties.

“There’s no real regulation in Ontario on who can be a pilot car.”

As far as
non-superloads are concerned, the only requirement is that pilot cars must have
an “OVERSIZE LOAD” sign and flashing amber lights.

“There’s no real regulation in Ontario on who can be a pilot car,” said Scott Mooney, owner of Transpo Pilot Cars of Guelph, Ont.

He said under
current rules, “any Joe” with a light on the roof and a sign saying, “OVERSIZE
LOAD” can just drive down the road and offer pilot services.

“Are they providing the service they are supposed to? That’s questionable,” Scott said.

To make matters
worse, there is nobody following up on the certification, and there is zero
enforcement by the authorities, he added.

Louis Juneau,
president of Nova Permits and Pilot Cars, based in Quebec City, Que., is also
critical of the Ontario program.

“Ontario went the
other way around for some reason, instead of implementing a generic
certification for all the oversize loads,” said Juneau.

The apparent lack
of regulation and oversight have led to a proliferation of companies offering
vehicle escort services at cutthroat prices.

“Like every other market, people are trying to undercut their competitors,” said Juneau.

“So, you have to be careful with whom you are
working,” he warned.

Juneau believes there are hundreds of players in the
market, and Quebec alone has about 20.

The biggest
hurdle, however, is the lack of access to proper insurance, he said.

“As soon as you
mention trucking, insurers take a step back, and if you mention that you want
go to the U.S., they take five steps back,” Juneau said.

So, his escort vehicles no longer go to the U.S. Whenever Juneau needs a spotter, he acts as a broker, and outsources it to someone in America, he said.

Both Transpo Pilot
Cars and Nova Permits and Pilot Cars are members of the Specialized Carriers
and Rigging Association, an industry group based in Centreville, Va.

He said the
association is working with all stakeholders to harmonize the rules and
processes governing the transportation of heavy loads.

“We advocate that
states and provinces come closer together as to when one escort is required to
kick in, when a second one is required to kick in, and in sometimes a third
one,” Todd said.

As of now,
different jurisdictions have different rules, making it difficult to operate
smoothly.

Todd also
expressed anguish over the lack of proper training.

“You have to go
through hours of training and certification just to be licensed and be able to
do somebody’s nails, and that’s great.”

“But in at least
37 states, somebody who can cause catastrophic accidents maneuvering around
these oversized loads can run out to an auto store, pick up a little Blinky
light, put a sign on the back of their car, and they’re all of a sudden, good
to go to pilot loads,” Todd said.

Todd said his
association continues to press for properly trained and certified drivers.

Over the past 15 years, the SC&RA has been collaborating with the U.S. Federal Highway Administration in preparing a document on best practices for both private pilots and police escorts.

That document was
updated five years ago.

“We also, for the first time, wrote a generic national training curriculum for pilot cars for training and certification,” Todd said.

Car Sales Fell in the Second Quarter, Despite Deals and Covid-19...

Cummins, Valvoline unveil one oil for them all – Truck News