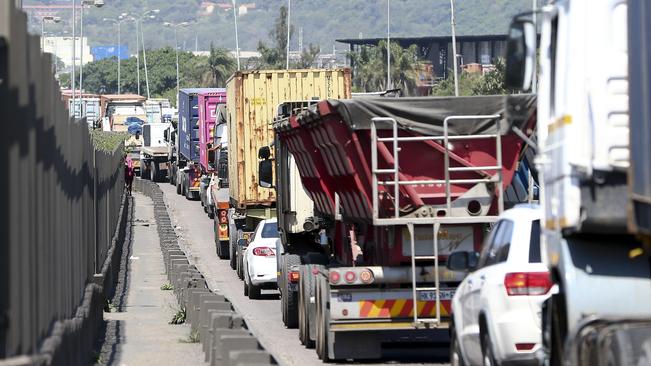 By Zainul Dawood 1h ago

On Tuesday, trucks were backed up from the container terminals entrance towards South Coast Road.

Motlohi leads a team of private and public sector entities. He said Bayhead Road had been plagued by congestion attributed mainly to operational inefficiencies at the DCT. In future, there would be more visibility from Durban metro police. There was also a possibility of widening Bayhead Road.

“It affects the entire supply chain and impacts shipping lines, the trucking fraternity and the rail sector,” Motlohi said.

“A key intervention was the re-introduction by terminal operator Transnet Port Terminals of a mandatory truck appointment system. It is considered best practice in the container sector globally,” he said. Since March 27, the system has helped to reduce waiting times.

It enabled Transnet Port Terminals to control the rate of collections and deliveries and use land-side capacity optimally. Motlohi said the port system was not synchronised in terms of hours of operation and days. “In order for the current picture to change, depots around the port would need to be in a position to operate 24 hours a day, seven days a week. They must be aligned with the operating hours of the container terminals.

Trucks are dispatched accordingly and cargo can be collected even during less popular hours, such as weekends and after hours,” he said. Terminal inefficiencies and poor land-side performance were being improved.

“Challenges include the purchase of new equipment, initiatives to address employee morale and maintaining existing equipment to deliver better reliability and efficiency,” he said. Motlohi said the delivery of 23 new straddle carriers was expected between June and July this year.

They would be introducing an hourly management system where performance is monitored every hour per machine and per individual. Truck drivers will be trained by the Transnet Maritime School of Excellence in terms of processes, and the dos and don’ts within the port.