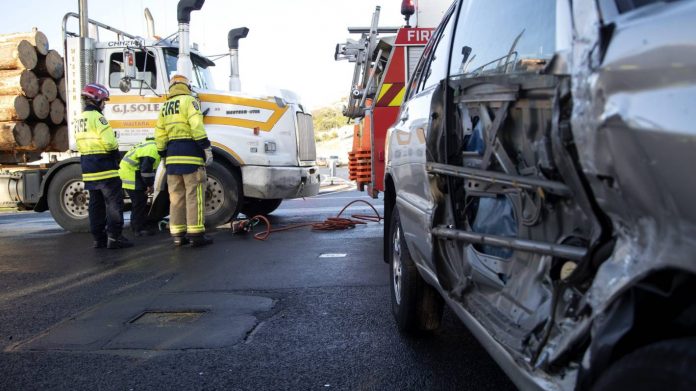 A car and a logging truck crashed at the corner of Breakwater and Ngamotu roads in New Plymouth.

Police say a woman was “very lucky” to have escaped serious injury following a crash involving a car and logging truck in New Plymouth on Tuesday morning.

Emergency services were called to the intersection of Breakwater Rd and Ngamotu Rd, Moturoa, at 8.58am.

Senior Constable Grant Kennard said two trucks were travelling along the road and the female motorist failed to see the second vehicle.

“In front of the truck was another truck indicating to turn left. She hasn’t seen the truck behind it.

“She’s driven into the path of it.”

Kennard said she was taken to be checked out medically but was “very lucky” to avoid injury.

He said drivers needed to be “very careful” that there was nothing coming behind a turning vehicle.

“If you can’t see what’s behind that vehicle that’s turning, wait till you’re absolutely clear there’s nothing behind it.”