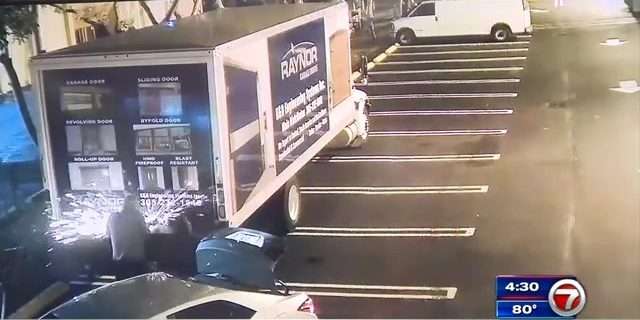 SOUTHWEST MIAMI-DADE, FLA. (WSVN) – Two men are facing serious charges and another remains at large after, police said, they stole a box truck and drove it to a warehouse in Southwest Miami-Dade to steal medical supplies.

Surveillance video captured one of the three subjects using a tool to try to break into the back of a truck that belongs to K & B Engineering in Southwest Miami-Dade, at around 2 a.m., Monday.

After an unsuccessful attempt, the thieves are seen cutting the lock.

Luis Gonzalez, the owner of K & B Engineering, said the security system alerted him about the burglary.

“Ten minutes after that, the cops were here waiting for me, and they noticed that the truck was gone,” he said.

According to Miami-Dade Police, the duo drove the truck to Prabadin, a medical supply company located nearby.

“We have masks, we have hand sanitizer, we have gowns,” said an employee with Prabadin who asked not to be identified.

The employee said the burglars were able to enter the building through a vent in the ceiling.

“They opened it up, and with a rope, they came down,” said the employee.

Employees said the subjects even drove the company’s forklift around.

But before they could take off with any in-demand medical gear, police officers arrived.

Investigators said a passer-by alerted them about suspicious activity.

One of the three crooks was able to get away, but the other two were caught and cuffed.

“Oh, we thank them. They did an amazing job. They truly did,” said the Prabadin employee.

Gonzalez said he got his truck back.

“They did a beautiful job,” he said.

Officials identified the two subjects who were taken into custody as Yakney Hidalgo-Perez and Darion Corrada-Ramos. They are facing a list of charges, including burglary and grand theft.

Their bonds were set at $25,500, and they have been ordered to house arrest.

Meanwhile, police continue to search for the subject who fled the scene.

If you have any information on his whereabouts or these burglaries, call Miami-Dade Crime Stoppers at 305-471-TIPS. Remember, you can always remain anonymous, and you may be eligible for a $1,000 reward.

Subaru WRX Pickup Actually Looks Good, Who Would Have Thought?