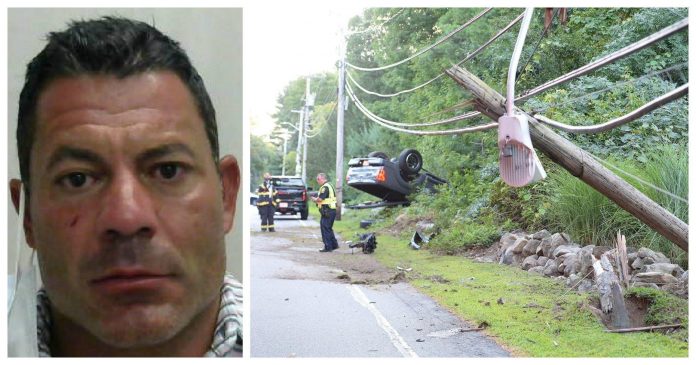 Police and firefighters responded to the area of 228 Lincoln St. Tuesday evening for a report of a rollover crash.

EASTON — Police say a speeding, drunken driver with two prior convictions for operating under the influence smashed into a utility pole, then flipped his pickup truck as he passed another vehicle.

Police and firefighters responded to the area of 228 Lincoln St. at about 6:41 p.m. Tuesday for a report of a rollover crash.

First responders found a Ford Shelby F-150 pickup truck on its roof in the tree line on the westbound side of Lincoln Street.

“Witnesses on scene reported that the F-150 had attempted to pass a vehicle at a high rate of speed while traveling westbound and, when doing so, lost control when trying to reenter the westbound lane and struck a utility pole,” said Deputy Police Chief Keith Boone.

The pickup truck slid on its roof several feet before coming to a rest off the roadway, Boone said.

The driver, identified by police as Jonathan Adams, was not injured in the crash and was arrested after failing field sobriety exercises administered by Officer Tim Webster, Boone said.

Adams, 44, of Easton, was charged with third-offense drunken driving, negligent operation of a motor vehicle and a marked lanes violation.

Adams was released from the Easton police station on $500 bail pending his arraignment Wednesday in Taunton District Court.

Lincoln Street was closed for several hours Tuesday night while crews worked to replace the damaged utility pole and restore electricity in the area.

Senior reporter Cody Shepard can be reached by email at cshepard@enterprisenews.com. You can follow him on Twitter at @cshepard_ENT.