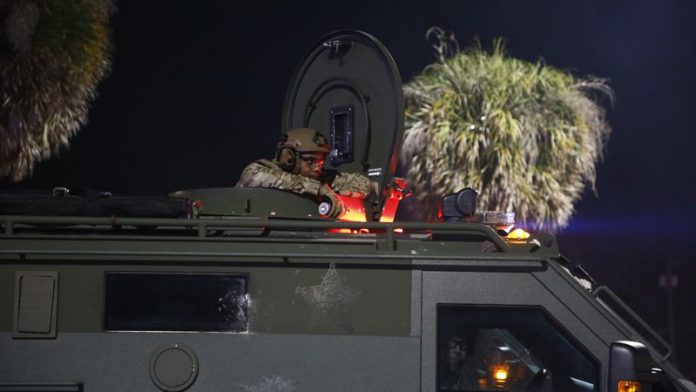 Buildings were burned and looted around University Square Mall on May 31 as police fired tear gas and rubber bullets and navigated the scene in tank-like vehicles.

Government and community leaders in Tampa Bay have tried engaging with protesters and activists to address concerns about police misconduct that have gained new attention with the death of George Floyd, a Black man who died May 25 while in Minneapolis police custody.

But it’s been hard for some activists to reconcile pledges of a more responsive police force when the police still count battle gear among their tools.

“It’s just like they’re numb, I don’t feel any connection,” Anquennette Shuler, 28, of Lutz, said during a protest on Busch Boulevard in the days after the University Mall clash. ”I feel like they’re more protective of themselves than they are of the people.”

Since 1997, the Defense Department has supplied surplus military-grade equipment for free or cheap to the Tampa Police Department, the Pinellas County Sheriff’s Office and some 8,000 law enforcement agencies nationwide, according to records obtained from the federal Defense Logistics Agency.

The price tag so far on the federal 1033 Program is some $7.4 billion, more than $200 million of it for agencies in Florida. The Tampa Bay area has received about $23.5 million in military gear, including helicopters, military-grade surveillance equipment, semi-automatic rifles, mine-resistant trucks and armored vehicles, and robots designed to both defuse and detonate bombs.

Most is used in rescue operations or reserved for some “worst-case” scenario, agencies say. But some of it has drawn attention during the recent protests.

During the unrest at University Mall, the Hillsborough County Sheriff’s Office rolled out its Lenco BearCat armored SWAT truck — lighter than a tank but clad in mine- and bullet-resistant material. It’s similar to the “Mine-Resistant Ambush Protected” military vehicles, known as MRAPs, obtained through the 1033 Program by sheriff’s offices in Pasco, Pinellas, Polk and Citrus counties, and by police departments in Tampa, Tarpon Springs, Clearwater, Pinellas Park, and Lakeland.

Not all the tools that give police the look of soldiers are purchased through the 1033 Program, but much of it is. And cops aren’t the only ones eligible.

Earlier this month, the president of the University of Maryland announced that campus police would withdraw from the 1033 Program and return all equipment obtained through it. But USF Tampa’s Police Chief Chris Daniel said his agency won’t be divesting while under his leadership, even if that means facing “ongoing criticism.”

“If we opt out of such opportunities we run the risk of being more forcefully condemned for being inadequately prepared to react to critical situations; particularly where citizens lives are at stake,” Chief Daniel said. “We don’t buy just to buy because the price is right.”

Apart from criminal activities that might demand use of such equipment, all-terrain vehicles like Humvees are often used to traverse roads that become flooded or strewn with debris during a hurricane, the Pasco County Sheriff’s Office said. Through the 1033 Program, the Sheriff’s Office has obtained five helicopters, a surplus ambulance, utility truck and medical supplies.

The 1033 Program also sent ten M-14 rifles to Hillsborough County Sheriff Chad Chronister’s Marine Unit, he said, but they’re only used when “conducting high hazard ship escorts through the Port of Tampa Bay, which is the largest supplier of fuel for our region.”

“If the port were to become the target of a terrorist attack, it would devastate our state’s economy,” Chronister said. “People often forget that deputies and officers live in the same communities where they work. It is never our intention or goal to turn our own neighborhoods into war zones.”

Questions were raised about the 1033 Program before the recent wave of protests. In response, then-President Barack Obama restricted what kinds of weaponry and tactical gear the program can sell to local law enforcement agencies.

But those restrictions were rolled back by President Donald Trump in 2017, allowing agencies to keep buying surveillance gear and bomb-detonating robots at a fraction of the cost.

The same year, University of Tampa professor Ryan Welch co-authored a research paper showing that the more equipment a law enforcement agency obtains through the 1033 Program, the more cases of police violence and civilian deaths it reported. The researchers couldn’t find a correlation between the 1033 program and crime reduction or improved officer safety.

Instead, they concluded that the presence of military equipment at a protest “might incite some number of people to engage in violence.”

New efforts to eliminate the 1033 Program, one called the “Stop Militarizing Law Enforcement Act,” are working their way through both chambers of Congress with backing from groups like the Southern Poverty Law Center and the Human Rights Watch.

“It’s a good program to this extent — allowing agencies that cannot afford to buy emergency equipment to protect their communities,” Holloway said. “But I’m not saying everyone should go out and get a tank.”

To his knowledge, he said, the St. Petersburg Police Department has never considered obtaining military surplus gear for anything other than rescuing and transporting people when storms flood city streets. The agency currently has two military-grade armored vehicles for search and rescue operations.

“The only time those trucks should be used or any of this equipment should be used is when someone’s life is in danger, and if you want to use it for something else you should discuss it with the community first and explain why,” Holloway said.

“It’s not for you to just roll out to intimidate people and put on display.”