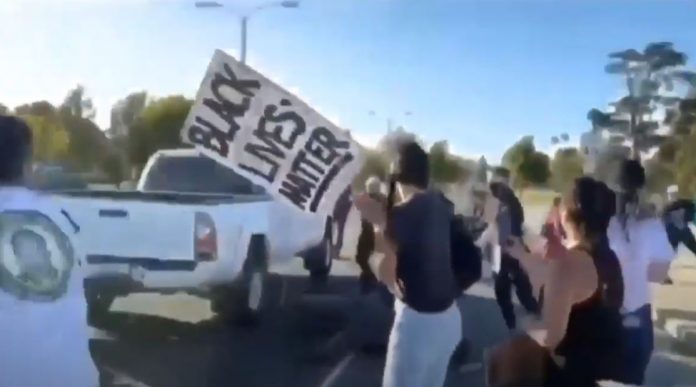 VENTURA (CBSLA) – Authorities are investigating cell phone footage which appears to show a pickup truck barreling through a crowd of protesters at a busy Ventura intersection this past weekend.

Video of a truck driving through a group of protesters in Ventura, Calif., on June 7, 2020. (YouTube)

The incident occurred Sunday at the intersection of Victoria Avenue and Telephone Road, just across from Ventura County Superior Court.

The video shows a white truck rolling through, surrounded by several dozen protesters. When one man tries to stand in front of the truck, it continues to push forward, knocking him to the ground. The truck then continues on its way, ignoring the cries of the group, several of whom chase after it.

It’s unclear if anyone was seriously hurt. Video recorded from a drone also captured the incident.

On Thursday, the Ventura Police Department reported that it was investigating the incident and asked any witnesses to come forward.

“We’ve received additional video footage of the incident…involving a white truck and individual participating in the peaceful protest,” the department wrote on Facebook. “As a result, we are continuing the investigation at this time. We appreciate the community’s input. We understand the concern surrounding this incident and appreciate the community’s input in sharing more information with our Department.”

On June 3, a man was arrested after he allegedly drove his Mini Cooper into a crowd of protesters at the Newport Beach Pier, striking several of them.

Last week, a Thousand Oaks woman was arrested on charges she pepper sprayed a protester from her car, an incident also caught on cell phone video.

Anyone who witnessed the Ventura incident is asked to call detectives at 805-339-4467.

The 2020 Nissan Frontier Features Its Replacement’s Engine and Transmission