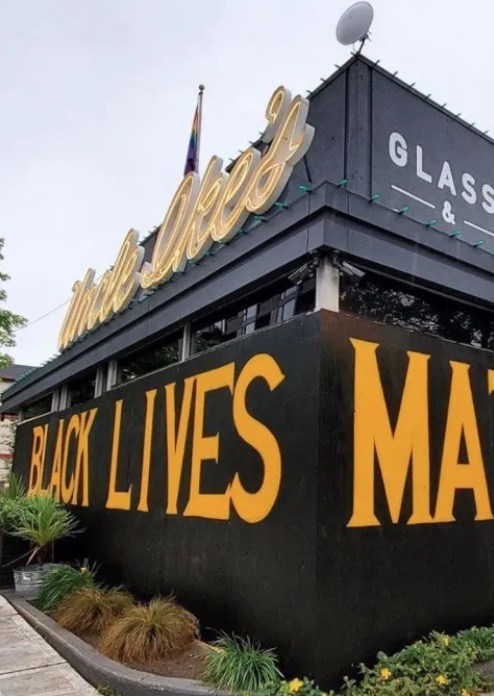 The Uncle Ike’s shopping complex at the corner of 23rd and Union suffered $5,000 in damage in a suspected overnight arson fire.

Crews were called to the retail shop just before 2:30 AM after an automatic fire alarm was triggered. Arriving firefighters found light smoke coming from a rooftop vent and transitioned the call to a full response and bringing several trucks to the scene.

The fire was quickly taken care of and three people inside the shop were reported to have exited on their own without injury.

We’ve reached out to Uncle Ike’s and will update if we hear back. UPDATE: Ownership sasy the fire was set outside the store using fireworks.

Seattle Fire was busy overnight with several fires caused by fireworks part of 4th of July celebration. SFD and Seattle Police have also dealt with numerous arsons in recent weeks including this string of fires set intentionally across the CD and South Seattle. There have been no announced arrests.

Protests over the years have targeted the shop over its white ownership and its location at a corner that had been the site of years of drug arrests in the middle of this core neighborhood in the Seattle Black community. Earlier Saturday, speakers during a Central District rally for Black Lives Matter initiatives at 23rd and Union in front of the shop included discussion of inequity in the legal pot industry.

In 2013, Med Mix left the corner after an arson fire scorched the popular restaurant and put its owner through a “three-year nightmare” of dealing with insurance in the aftermath. Otmane Bezzaz reopened just off 23rd and Jackson in 2018. Ian Eisenberg, who owns the 23rd and Union property, opened his first Uncle Ike’s at the corner in 2014.

Another Eisenberg property suffered damage last week when the El Costeno food truck on Eisenberg’s property at 21st and Union suffered a break-in and vandalism, its owner said in a Facebook post.

BECOME A ‘PAY WHAT YOU CAN’ CHS SUBSCRIBER TODAY: Support local journalism dedicated to your neighborhood. SUBSCRIBE HERE. Join to become a subscriber at $1/$5/$10 a month to help CHS provide community news with NO PAYWALL. You can also sign up for a one-time annual payment.