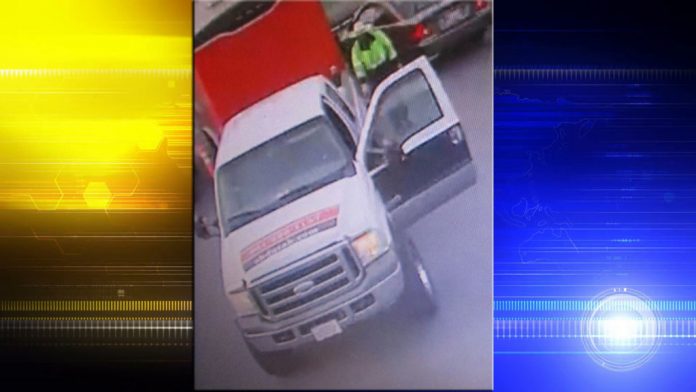 Suspected truck seen on video towing a trailer that was stolen from a Logan neighborhood, loaded with $20,000 of solar panel equipment (Courtesy: Logan City Police Department)

LOGAN — Logan City police officers are asking for the public’s help identifying a man who is suspected of stealing a trailer that was loaded with $20,000 of solar panel equipment. The theft was reported April 5.

The trailer was later seen on video in Salt Lake being dropped off but the solar equipment was no longer on it. The suspect vehicle appears to be a white 2008 to 2010 Ford F250 or F350. There is a black line on the driver’s side door, like a business decal is being covered up. A decal on the hood also lists a business name.

Hooley said the truck, seen on the video, is also suspected of stealing another trailer in Salt Lake.

Detectives in Salt Lake have been in contact with the company listed on the truck decal. Employees claim that vehicle does not belong to them.

Hooley said officers don’t have any suspects. They are hoping that someone may have details about the theft or recognize the truck.

Anyone with details about the theft is asked to call the Logan City Police Department.

Would you like to have the day’s news stories delivered right to your inbox every evening? Enter your email below to start!

Truck crash on Hume Highway continues to be managed by Harden...