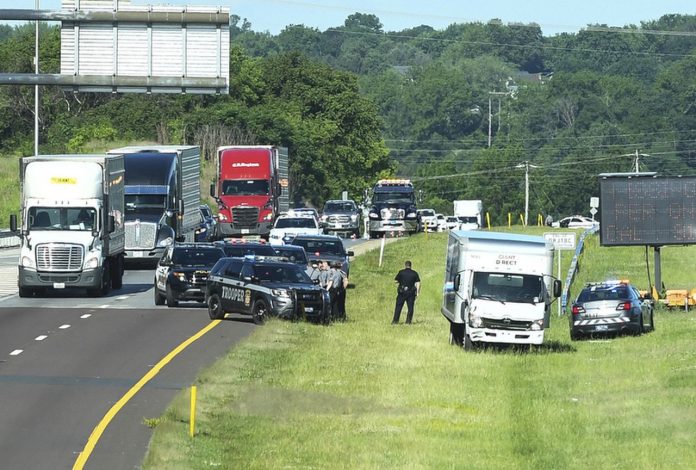 Pennsylvania State Police say Alonzo Gaffney, 32, was removed from the truck in a “delirious state” after crashing just after 8 a.m. Sunday in Williams Township.

Police said Gaffney stole the Peapod Giant grocery store box truck from Bethlehem some time before 8 a.m. Sunday, June 7. By the time state police started pursuing Gaffney on Route 22 near Schoenersville Road, he had already driven the truck into multiple vehicles in multiple jurisdictions, according to police.

The back doors of the truck were open and it weaved across lanes without signaling as it proceeded at about 55 mph, police said.

Police followed the truck to Route 33 and then to Interstate 78, where a state police cruiser went in front of it to slow it down, police said. The truck hit the police car, swerved, hit the police car again and wound up in the grassy median of the highway near the Easton exit.

Police said Gaffney appeared intoxicated and said he wanted to die. He claimed he had a nail in his ribs, which was put there by a prostitute, police said. He was taken to St. Luke’s Hospital in Bethlehem Township after the crash, police said.

Gaffney, of the 100 block of Carteret Avenue in Jersey City, is charged with aggravated assault, receiving stolen property, fleeing police, reckless endangerment, false identification to law enforcement, accidents involving damage, two counts of driving under the influence and a handful of traffic violations.

District Judge Vivian Zumas set bail at $100,000. He could be released on 10 percent of that amount if approved by pretrial services. He must undergo a mental health evaluation before he can be released.

Our journalism needs your support. Please subscribe today to Lehighvalleylive.com.

Rudy Miller may be reached at rmiller@lehighvalleylive.com. If there’s anything about this story that needs attention, please email him. Follow him on Twitter @RudyMillerLV. Find Easton area news on Facebook.