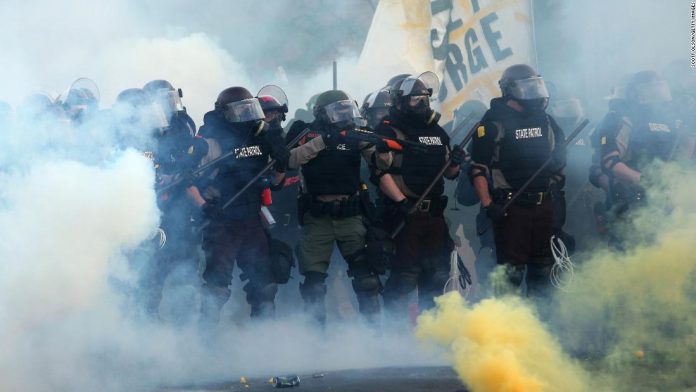 “They’re making the argument for the demonstrators, that American policing remains unreformed and out of control,” says Alex Vitale, a professor of sociology at Brooklyn College who studies police response to protest.

“That’s what people in the community want. They really want to be joined with their police department. They want to feel a sense of trust,” says Cedric Alexander, a CNN law enforcement analyst and former president of the National Organization of Black Law Enforcement Executives.

But Vitale says some police departments have been sending a much more aggressive message.

“I’m surprised at the scale of it, that so many departments across the country are taking this zero-tolerance, quick escalation stance towards the demonstrators,” he says. “They very quickly escalated to tear gas and charging crowds. … They did not go that extra mile to try to keep things from escalating out of control.”

Here’s a look at some of the forceful ways we’ve seen officers around the country responding to protests:

Some are firing tear gas

What started as peaceful protests last week over the death of George Floyd in Minneapolis have sometimes turned violent. In many cities, stores have been looted and police have been pelted with rocks and bottles. Hundreds of people have been arrested.

Video footage and photos from protests across the country — from a park outside the White House to the streets of Minneapolis — show law enforcement firing tear gas into crowds of people. Sometimes the tear gas is being fired in response to violence and looting, and sometimes protesters allege it’s being fired without provocation.

“In the 1960s and ’70s we saw a lot of use of tear gas, and mostly police departments learned a lesson — that tear gas almost always makes the situation worse,” Vitale says. “And now all of a sudden, they’re just letting it fly all over the place.”

Vitale is the coordinator of the Policing and Social Justice Project, which has called for police funding to be cut, arguing that using the money for other programs like increased school counselors and drug treatment would do more to keep residents safe.

He says the firing of tear gas is one telling example of the ways police are not only inflaming tensions in the streets, but bolstering the case he and other critics have been making.

“This is a gross overreaction,” he says.

Police across the country have defended their decisions to use tear gas.

“We applaud those who stand up and protest against police brutality, because we do, too, and we stand with them. But last night, peaceful protests began, but that is not how it ended,” Dallas Police Chief U. Reneé Hall told reporters Saturday after officers deployed tear gas during protests the night before. “And what I want you to be clear about with me today, so there is no ambiguity, this department will not tolerate rogue vandalism. We will not tolerate tearing up our city. We will not tolerate tearing up our communities and bringing hurt, harm or danger to individuals who are protesting, and definitely not the ones who are protecting the residents of this community.”
According to the Dallas Morning News, Hall said the decision to use tear gas was made because property was being vandalized, bricks were thrown at officers and tires were slashed on police squad cars.

Some are accused of using excessive force

Authorities in several cities have said they’re investigating allegations that some officers have used excessive force in their responses to protests.

In Atlanta, two officers were fired after police say they broke the windows of a vehicle, yanked two protesters out of the car and tased one of them.
The police chief in Louisville, Kentucky, was fired after officials say they discovered two police officers involved in the fatal shooting of a man during a protest had not activated their body cameras. An investigation is ongoing and the officers themselves have not been charged.
The police chief in Salt Lake City, Utah, says an investigation is underway after video footage showed an officer knocking down a man with a cane at a protest there.

And in Seattle, city council members are calling for the police chief to answer questions about how officers handled protests over the weekend.

“The very thing that everybody was protesting, excessive police force, was met by a militarized response,” council member Teresa Mosqueda said, according to CNN affiliate KIRO. Police there say they’re investigating thousands of complaints about their response to the protests.
In New York, Gov. Andrew Cuomo says he’s asked the state’s attorney general to investigate after videos surfaced showing what the governor called “disturbing actions” by officers during protests.
Footage from New York showed a police truck plowing into a crowd, an officer brandishing his gun amid protesters and an officer pushing a woman.

“I think some of the actions of the NYPD have exacerbated the anger. There are videos of some NYPD actions that are very disturbing,” Cuomo said in a briefing on Monday. “There are videos of NYPD cars driving into a crowd that are very disturbing, pulling a mask down off a person to pepper spray them, throwing a woman to the ground, it’s on video, it’s on video. The looting is on video, so is NYPD activity on video.”

The governor’s comments drew a swift rebuke from the president of the city’s police union, who accused Cuomo of “wrongly blaming the chaos on the cops.”

“Police officers are being run down, knocked down and almost shot on a nightly basis,” Police Benevolent Association President Patrick Lynch said in a statement.

“I can’t get into the individual cops’ minds, except to think that the night before, a Molotov cocktail had been thrown in a police vehicle with four police officers in New York City,” Gagliano said. “I’m guessing that they were nervous about what was happening. Things were being thrown at their vehicle. There was no way out. Somebody stepped on the gas. It’s unfortunate. It’s awful. We don’t want to see any harm, anybody hurt, but this right now, this — it’s like a war zone in this country.”

Many are wearing riot gear

But even when no tasers are drawn and no shots are fired, some say some officers are behaving in a way that spurs more violence rather than calming the situation.

One case in point, they say: officers wearing riot gear.

“Equipping officers in a manner more appropriate for a battlefield may put them in the mindset that confrontation and conflict are inevitable,” said Rachel Ward, National Director of Research at Amnesty International USA, in a statement. “US police across the country are … exacerbating a tense situation and endangering the lives of protesters.”

Police leaders have cautioned that protective gear is necessary to keep officers and the public safe.

In Boston, after a city councilor criticized police for wearing what she described as “riot gear” to a protest, the police commissioner defended his officers on Twitter.

“The officers after being attacked by objects thrown at them by violent protestors, were ordered to put on protective helmets, not riot gear,” Boston Police Commissioner William Gross wrote. “The Officers were in uniform not riot gear. Four officers, your constituents, were injured. One hospitalized. Ty (thank you) for caring.”

Some are arresting and assaulting journalists

Through it all, reports of journalists being arrested and assaulted while covering the protests have also been growing.
A photographer in Minneapolis said she was blinded by a rubber bullet. In Louisville, an officer fired what appeared to be pepper balls at a reporter for local TV station WAVE 3 News. The incident was broadcast live on the air.
In some cases, authorities have apologized, like Minnesota Gov. Tim Walz did after CNN’s Omar Jimenez and his team were wrongfully arrested in Minneapolis last week.

Some journalists have also reported being attacked by protesters.

Human rights and advocacy organizations warn that attacks against the press are a troubling sign.

“When journalists are attacked, societies are attacked,” UN Secretary General António Guterres said on Twitter. “No democracy can function without press freedom nor can any society be fair without journalists who investigate wrongdoing and speak truth to power.”

Some may be taking cues from the President

Trump hasn’t spoken out about specific allegations of excessive police force in response to protests, but on a conference call with governors this week he urged them to take more aggressive tactics with violent protesters.
“You have to dominate, or you’ll look like a bunch of jerks,” Trump said, according to an audio recording of the call obtained by CNN. “You have to arrest and try people.”
That, Houston Police Chief Art Acevedo said, isn’t what law enforcement should be doing.
“It’s not about dominating,” Acevedo told CNN’s Christiane Amanpour. “It’s about winning hearts and minds.”

Acevedo said police need to act swiftly to weed out bad cops, stressing that on a daily basis around the county, most officers are doing the right thing.

“When good policing happens, which happens every day in our country, it doesn’t make the news. Tens of millions of contacts every year, in very dynamic situations, it doesn’t make the news,” he said. “We’re the most visible cog of government. When we get it wrong, there’s no excuse. We can’t excuse it. We have to accept it. But don’t kid yourself into believing that the rage is just because of what happens with police.”

Protesters, Acevedo said, are outraged over other things, too, like inequalities in health and education.

“The reason this stuff happens is because there are too many people right now in this country that are throwing block — bricks and damaging property, never bother to vote. So, you have a choice,” he said. “Lift up your voice. Be heard in the voting booth, and continue to march peacefully, so the focus remains on bad policing, criminal policing.”

Hours after the Houston police chief spoke with CNN, peaceful protesters just outside the White House gates were dispersed with tear gas, flash grenades and rubber bullets.
It was all, apparently, so Trump could visit a nearby church.