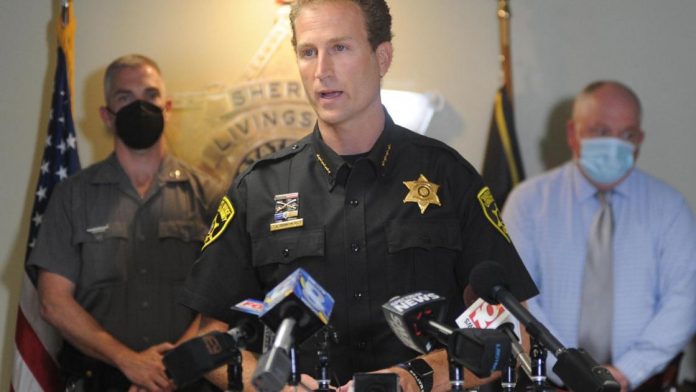 GENESEO — Joshua Blessed did not have any love for police, calling them “domestic terrorist blue devils” and “Gestapo Swat teams” on his many social media posts.

He also wrote this on his website “Prophecy of Yahweh:” “I received from heaven a new task ‘go, begin recruiting for a heavenly hosts/army…’ ”

That army, he wrote, would help in the fight against police who enforce “ungodly unconstitutional ‘red flag law.’ ”

It was with that mindset, perhaps, that Blessed, formerly known as Sergei Jourev, refused to respond to police after he was stopped for speeding in Le Roy about 8:30 p.m. Wednesday.

Just over an hour later, Blessed was dead, leaving a trail of destruction behind and police searching for answers after a zig-zagging pursuit across three counties in which gunfire was exchanged several times and multiple police vehicles damaged.

“He was purposefully trying to hurt cops tonight, and ultimately, this is how it ended,” Livingston County Sheriff Thomas J. Dougherty said during a media briefing late Wednesday night near the scene.

Blessed, 58, is from Harrisonburg, Va., and was driving a truck to Batavia to retrieve dairy products for his employer, Yurman Express, LLC of Harrisonburg.

A village of Le Roy officer stopped him on Route 5, near East Bethany-Le Roy Road.

“He would not roll down his window to speak with the officer,” Le Roy Police Chief Christopher Hayward said during a Thursday news conference at the Livingston County Sheriff’s Office in Geneseo. “Simple directions, he would not comply with the officer.”

Because of that, a second officer was sent to the scene, Hayward said. “When that additional unit got to the scene, they both climbed up onto the cab – the one on the passenger side to determine if he could see a weapon in the vehicle, which … is routine in these matters,” he said.

When the officer on the passenger side jumped off to confirm the license plate, Blessed drove away – with the first officer still on the truck. The officer jumped away and was not injured, Hayward said.

Blessed’s rig smashed into a Le Roy patrol car and a Genesee County Sheriff’s patrol car as he continued driving west to Batavia. Blessed did a U-turn near Seven Springs Road, drove back toward Le Roy before turning right onto Route 19 and then Route 63, passing through Pavilion, Covington and then into Livingston County. The pursuit reached speeds of 70 mph as the its crossed Route 36 in Greigsville, where the posted speed limit is 30 mph.

The rig hit three Stop Sticks during the pursuit.

It was in Geneseo that Blessed began firing shots at police, hitting one patrol car 10 times, shooting at a deputy at Route 20A and Country Club Road and hitting another patrol car.

More rounds were fired when the pursuit stopped on the exit 8 ramp of Interstate 390, where two more patrol cars were smashed. The truck drove south on Interstate 390, made another U-turn to the northbound lane and returned to exit 8 – and more gunfire – and back onto Route 20A, west toward the village. As the truck neared Applebee’s, deputies fired more shots and the rig went off the road and into a field.

“When he started taking shots at our cops … when he was trying to kill our deputies, that’s when we decided to use lethal force,” Dougherty said.

Blessed was dead when officers approached the cab.

“I will confirm that he did have gunshots, meaning more than one.” he said.

The pursuit lasted more than an hour. At one point, the Sheriff’s Office sent a message to mobile phones advising people to stay off Interstate 390.

Police now are trying to piece together the last 24 hours of Blessed’s life, trying to make sense of how a traffic stop could go so horribly wrong.

“At the end of our investigation, we hope to have a lot of those answers but unfortunately, sometimes we do not get all of our answers either,” Dougherty said.

“We do know that our sheriff’s investigators have started to dig into him, and you will see when you dig into him, there is some anti-law enforcement statements on his social media, those are things that we are looking at,” Dougherty said.

Blessed, on social media, appeared to be a religious zealot, frequently getting banned from Facebook. He often took aim at police, writing vaguely threatening posts about police brutality.

What police do know is that no one was injured during the pursuit, despite some close calls.

“The Genesee car was struck twice with one of the shots right thought the windshield and went over the deputy’s head rest and came to rest in the glass separating the front seat and the back seat,” Dougherty said. “If the officer was not ducking it would have been right to his head.”

One handgun was found on Blessed. “I would call it a miracle, so many shots at law enforcement,” Dougherty said. “The civilians around. It is simply unbelievable that no one was injured.”

When businesses shut down, truckers lost work, risked their health to...