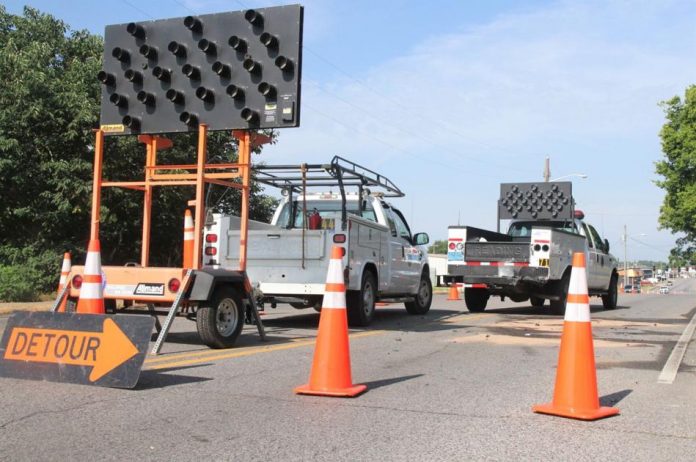 SHEFFIELD — Police are searching for the driver of a sport utility vehicle that crashed into a Sheffield Utilities truck that was blocking a portion of Second Street due to a water leak.

The utility company had to close the westbound lane and turn lane of Second Street near East 10th Street on Monday after noticing water seeping up through the pavement.

Sheffield Utilities General Manager Steve Hargrove said a 3/4-inch copper water service line going to a nearby business was leaking under the road.

Sheffield Gas, Water and Wastewater Department Manager Tommy Barnes said the service line came off a main line under the street. Workers had to block the road to repair the leaking line.

“We closed off the road for safety reasons,” Barnes said.

Barnes and Hargrove said the work was expected to be wrapped up by late Wednesday afternoon.

That portion of Second Street has a concrete base beneath the blacktop asphalt.

A utility crew had to cut through the asphalt and concrete base to get to the leaking waterline, Barnes said.

Barnes said Wednesday that one of the two trucks blocking the road was struck by a vehicle early Wednesday morning.

Two utility department vehicles, both fitted with flashing signs, were blocking the westbound lane and turn lane. A flashing arrow was pointing to East 10th Street. Detour signs were visible east of the area.

“You could see it plain as day,” Police Chief Ricky Terry said.

Terry said a 2007 GMC Yukon SUV was found at the scene after officers responded at about 1 a.m. Wednesday.

“Officers found the vehicle, but didn’t find the driver,” Terry said. “The driver took off on foot. They attempted to locate him for several minutes, but couldn’t locate him. We have the (vehicle) owner’s name, but we need to identify the driver.”

He said the utility department truck had a damaged rear bumper and two broken tail lights.

Corning council to look at aid for restaurants – Red Bluff...