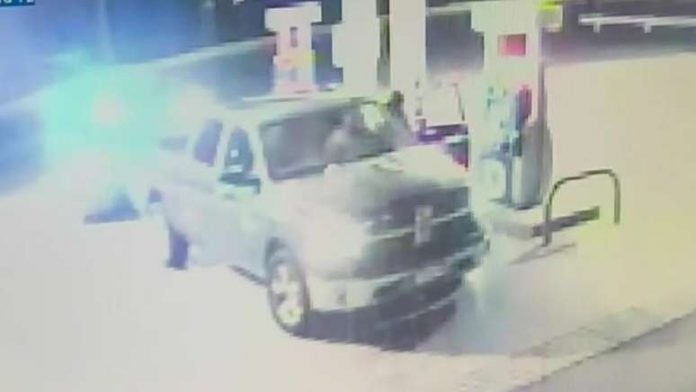 TAUNTON, MASS. (WHDH) – A suspect has been taken into custody after allegedly dragging a state police trooper with his pickup truck while fleeing a traffic stop in Taunton on Tuesday.

Surveillance video shows the trooper approaching a 2019 Dodge Ram at the Mobil gas station on Route 140 around 8:15 p.m. when the suspect, identified by state police as a 32-year-old Dorchester man, suddenly drove off and pulled the trooper a short distance.

Joseph Davis, a gas station clerk, had been working the register when he noticed the incident.

“They pulled in and about a minute or two later, I heard the tires peeling and them driving around, so I turned around. I could see the officer hanging off the vehicle and being thrown into the street here, at the edge of the parking lot,” he recalled.

Davis and another customer ran over to help the trooper, who state police say suffered minor injuries.

“He was laying next to the road, which is a very busy road,” Davis said. “His flashlight was out in the middle of the road, so the other guy had a flashlight up so that cars could see.”

The trooper continued working his shift and assisted other state police units in the search for the suspect.

“Fortunately, he’s good,” Davis said about the trooper, “so that’s all we can ask for at this point, and hopefully they’ll get whoever decided to do that.”

State police announced Wednesday around noon that their Violent Fugitive Apprehension Section and Gang Unit apprehended the suspect. His name has not been released.

This is a developing story; stay with 7NEWS on-air and online for the latest updates.