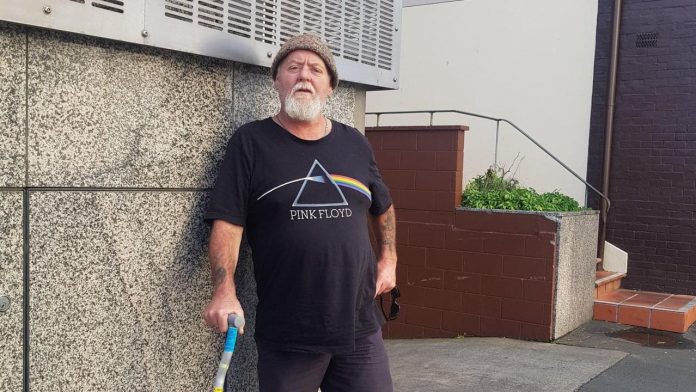 A DISABILITY pensioner who planned to dump “eight tonne of s***” outside the office of then-Premier Will Hodgman has won his fight against Tasmania Police.

Scott Wayne Moore, 52, was found not guilty of resisting arrest after claiming he got “jumped” by members of the force outside the Executive Building on September 9 last year.

Mr Moore claims he was staging a peaceful protest – with cow manure donated by an anonymous farmer – against Centrelink after struggling to get a permit to drive his truck.

He represented himself in a colourful contested hearing at the Hobart Magistrates Court last week after sacking his lawyer.

The footage also shows the police and Mr Moore engaging in a brief struggle before the pensioner is placed in a divisional van and taken from the scene.

On Tuesday, Magistrate Robert Webster said he couldn’t detect any evidence that Mr Moore had resisted arrest or braced himself.

He also said police only told informed he was under arrest after the struggle began.

However, Mr Moore was found guilty of the more minor crime of failing to comply with the direction of a police officer after they told him to leave the Hobart waterfront area.

“There is no dispute Constable Hardman gave Mr Moore a direction to leave the area,” Mr Webster said.

“Although Mr Moore agrees to leave, his leaving is conditional on first ‘dumping this s***’.

“Both police officers believed he was going to dump the s***.”

After sentencing Mr Moore, Mr Webster asked: “Where did you get your s*** from?”

“I can’t disclose that. The fellow that donated it was happy for the cause,” Mr Moore replied.

The pensioner told the court that “at the end of the day, all I wanted to do was work”.

“We’ve got these people who run this state who are not even interested,” he said.

“I just wanted help from these people who are supposed to look after us.”

He said he was banned from every Centrelink and Medicare office in the country until 2021.

Mr Webster said while he didn’t have Centrelink’s side of the story, he said Mr Moore’s case was a reminder that all clients should be treated with respect.

“This all happened because you were frustrated about being handballed around,” he said.

“It’s no excuse for what you did, but I understand why you did it.”

Mr Moore was also convicted of one count of breaching bail.

FET suspension a “stimulus package for the trucking industry”