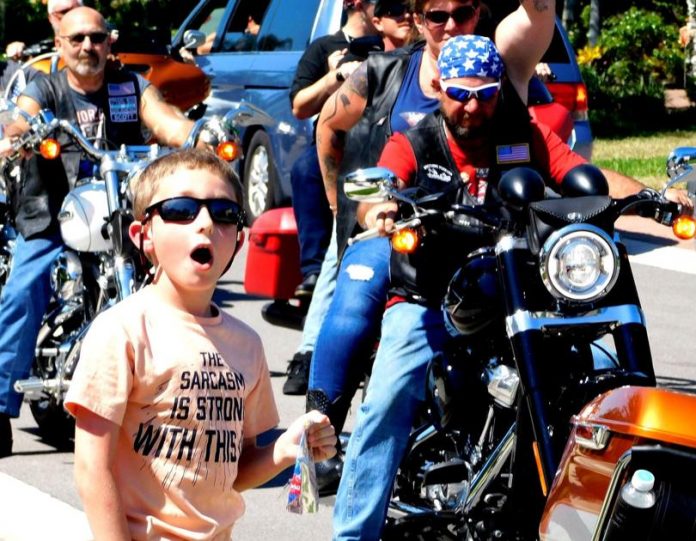 PORT CHARLOTTE — Even though he’s only 8 years old, Alex Meyer said he’s always wanted to be a cop when he grows up.

“I feel like there should be more police officers out there trying to help people,” Alex said. “I just think it’s the right thing to do.”

Alex got a special look Sunday afternoon at some of the gear and vehicles that make the cop when members of the Charlotte County Sheriff’s Office SWAT team joined the “Support for Alex Parade.”

Charlotte County firefighters, along with members of the Patriot Riders of America local motorcycle chapter and over 100 other pedestrian vehicles, filled River Bank Way in Port Charlotte for the impromptu event.

To top it all off, a CCSO helicopter made a fly-over in honor of Alex, who was diagnosed March 5 with inoperable brain cancer. He has lost 75% of his vision and is starting chemotherapy.

“I was actually very surprised by the parade,” Alex said. “Me and my friend were waiting in my room, we were like, ‘Oh my gosh, what is going on?’.”

The event came together in days.

“The mom (Tiffany Meyer) reached out to me,” said Sirena Wilhite, part-owner of Wanna Bounce, a bounce house rental company in Port Charlotte. “She was going to rent a bounce house from us but was going to have to put it on hold. She told me she had to wait for the doctor’s confirmation to make sure it was safe for Alex to play in a bounce house.”

Wilhite said she posted the idea of the parade on her company’s Facebook page and it took off.

“I just posted on our business page and everybody was re-posting from there,” Wilhite said. “As a mother, I would want somebody to do the same for me if it was my child. I wanted to make sure it was something he could remember with everything going on and losing his eyesight.”

Alex’s parents, Tiffany and Timothy Meyer, were blown away by the community response for something they thought would be just a small affair of family and friends.

“This was huge,” Tiffany said. “I didn’t know very many of the people. I’m speechless. Overwhelmed. Grateful. Blessed. After the motorcycles passed, that is when I started crying and didn’t stop.”

Tiffany said the whole thing started with Alex earning his “AR (Accelerated Reader) shirt”, an educational program where students have to earn a certain amount of points for reading.

“It’s like a reading comprehension test for school,” Tiffany said. “He earned it last week. I wanted to surprise him with a bounce house. (Wilhite) called me and said she wanted to get the community together to do something. I didn’t think it would be this (though).”

The Meyer family is only in the first month of a 15-month plan for Alex’s cancer.

“We just feel overwhelmingly blessed by the outpouring of support from the community,” Timothy said. “We have a long road ahead of us and this is something that really helps us to push forward on that journey. It’s nice to know that everyone is there to support us in anyway. This is just a great example of that.”

“I did not know this was happening,” Alex said. “When the fire truck came and then right when all the cars passed I was like, ‘Wait, is this a parade?’.”