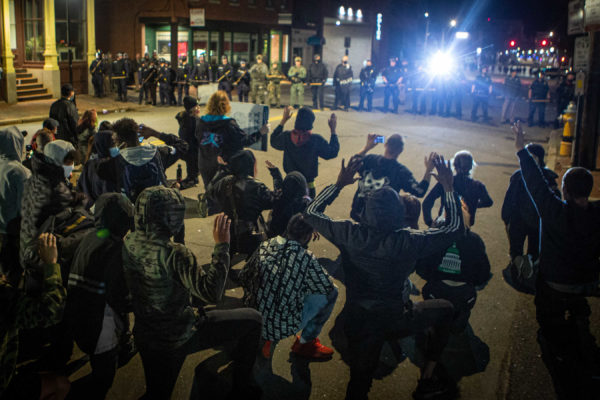 Protestors kneel on Middle Street in Portland on Tuesday during a late-night standoff with police.

PORTLAND, Maine — The owner of a commercial building in the Old Port apologized for hiring armed security guards to stand outside the property during an anti-racism protest on Tuesday.

The two security guards wore vests and carried rifles, according to photos captured by citizens and shared on social media, alarming many protesters who passed the building as they were leaving the evening’s rally outside the police station.

Allan Labos, who owns the building at 193 Middle Street, said that he hired a security outfit “on short notice” Tuesday after damage was reported to commercial properties during a charged protest in the area one day earlier. He now says it was a mistake.

“In hindsight, I overreacted based on information [we] were getting via news outlets,” Labos said. “I truly apologize to the community for sending out the wrong message. [I] was only trying to protect livelihoods.”

Protests in Portland have grown increasingly large since they first occurred last Friday, in connection with Black Lives Matter uprisings after the May 25 killing of George Floyd, a black man who was in the custody of Minneapolis police officer Derek Chauvin. Chauvin, who kneeled on Floyd’s neck for minutes, has since been charged with murder and three other officers on the scene have been charged with aiding in Floyd’s death.

Monday’s protests were loud, sprawling and peaceful before dark, when the driver of a large tractor-trailer truck slowly drove through a crowd of protesters outside the police station, escalating tensions. In the hours that followed, some protesters threw water bottles at police in riot gear, who retaliated with pepper spray and pepper bullets.

Police made 23 arrests, including the driver of the truck, who was not connected with the protests, while damage was registered to eight businesses, including Urban Outfitters, across the street from Labos’s building.

Akari, a Portland salon and one of four commercial tenants inside 193 Middle Street, wrote a post on social media that they had not been made aware of Labos’s decision to hire armed private security guards.

“We deeply regret the profound impact their presence has made on the members of the community and the souls who were peacefully making their way home,” the post read.

The presence of the two security guards, armed with rifles and without police insignia, caused a stir that may have contributed to further confrontations with state and local police a block away later Tuesday night, which led to 10 more arrests.

Portland police spokesperson Robert Martin said that police were aware of two armed subjects that were described to the department as “security contractors.”

Labos did not disclose which private security company he went through and inquiries to area companies were not returned. But after receiving public backlash, Labos was contrite.

“I support the protests,” he said. “I take sole responsibility.”