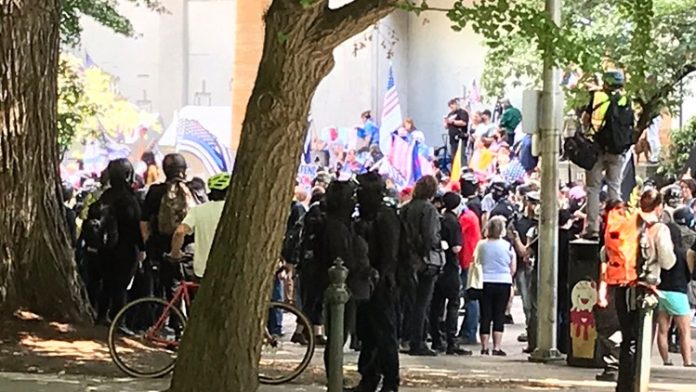 After night of violent clashes that led to 9 arrests

PORTLAND, Ore. (AP) — Federal authorities on Saturday forced demonstrators away from a plaza near a federal building as dueling demonstrations in Portland by right-wing and left-wing protesters turned violent.

The area includes county and federal buildings and has been the site of numerous recent protests.

Department of Homeland Security officers moved through the plaza across from an 18-story federal building. A federal courthouse is also near that area.

The demonstration began at about noon near the Multnomah County Justice Center in Oregon’s biggest city, local media outlets reported. Demonstrators hurled rocks and other items at each other and got into fights. Streets were blocked amid the mayhem.

Images showed what appeared to be hundreds of people involved, many of them wearing helmets and carrying makeshift shields. Some demonstrators appeared to use pepper spray during clashes, and at least one person appeared to pull a gun. No arrests were reported.

The Justice Center in recent weeks has been the target of left-wing protesters mostly operating at night, when they frequently get into clashes with police. Saturday afternoon’s demonstrations spread to other areas as crowds marched.

Right-wing groups had announced a rally near the Justice Center Saturday afternoon that quickly drew counter demonstrators. The building houses a police precinct, police headquarters, a county jail and courtrooms and is next door to a federal courthouse that was targeted for weeks last month by left-wing protesters who clashed with federal agents dispatched to Portland to protect it.

Portland police issued a warning about two hours after the demonstrations began, warning that officers were prepared to start using crowd control weapons if the violence did not end.

Violent demonstrations have gripped in Portland for months, following the police killing of George Floyd in Minneapolis police custody.

The Saturday afternoon clashes followed predawn clashes between police and about 200 left-wing protesters outside a different police precinct.

PORTLAND, Ore. (AP) — Rioters and police in Portland clashed before dawn Saturday after about 200 people marched to a police precinct station in yet another night of violence in Oregon’s largest city.

Demonstrators hurled bottles and rocks at officers and pointed lasers at them, damaging police cars and causing minor injuries for several officers, Portland police said in a statement.

One protester was given medical treatment at the scene after he threw rocks at officers and was shot with what police described as a “sponge-tipped less-lethal round,” the statement said.

He was among nine people arrested. Three were charged with assault on a police officer.

The demonstration Friday that went into Saturday morning came a day after protesters in Portland clashed with federal agents outside a U.S. Immigration and Customs Enforcement building.

People in a group of about 100 late Thursday and before dawn Friday sprayed the building with graffiti, hurled rocks and bottles at agents and shined laser lights at them, Portland police said.

The agents set off smoke or tear gas and used crowd control munitions to try to disperse the crowd. Three people were arrested.

Also Friday, a number of federal buildings across the city were closed as the FBI investigated a car bomb threat.

Here is a list of the 9 arrests made during the riot:

Mai, Justin, 23, of Corvallis, Oregon, criminally cited for Interfering with a Peace Officer, Disorderly Conduct in the Second Degree, and Criminal Mischief in the Third Degree

Oram, Sarah, 42, of Portland, booked into the Multnomah County Detention Center for Interfering with a Police Officer, Disorderly Conduct in the Second Degree

Corkery, Teagan, 29, of Portland, criminally cited for Interfering with a Peace Officer

Rohrwasser, Benjamin, 26, unknown residence, booked into the Multnomah County Detention Center for Riot, Interfering with a Peace Officer, Disorderly Conduct in the Second Degree, Escape in the Third Degree

Multiple arrests were made during a riot at Portland Police’s North Precinct Community Policing Center that resulted in heavy damage to police cars and injuries to officers.

Officers placed unoccupied police vehicles parked on Northeast Emerson Street on the southwest side of the precinct and yellow police line tape across the road. That was done with the intention of keeping the crowd away from the building. In past protests there have been attempts to commit arson and burn the occupied building. A police loudspeaker provided warnings to the crowd not to enter city property and on the closed area of Northeast Emerson Street.

Almost immediately the officers were targeted by thrown bottles, eggs, and green lasers toward their eyes. The lasers are powerful enough that they’re capable of causing serious, permanent eye damage. The police sound truck issued further warnings, notifying the crowd that officers have observed people in the area of North Precinct throwing projectiles and pointing lasers at officers. Anyone who is involved in criminal behavior including throwing projectiles and/or laser pointing, is subject to arrest, citation and/or use of force, including, but not limited to, crowd control agents and impact weapons.

Despite warnings, individuals in the crowd continued throwing things. Officers tried to retreat out of sight to attempt to deescalate (photo). Over the next three hours, individuals in the crowd pelted the police vehicles with softball-sized rocks, glass bottles, golf balls, ball bearings, metal railroad spikes (photo), and plastic eggs filled with paint (photo). There were also balloons filled with feces thrown on the cars and even a torn up street sign was used to vandalize the marked police cars (photo). Windows were broken and tires were deflated (photo).

However, because the risk did not involve life safety, and in an attempt to deescalate and avoid the need to use of force, officers remained far back (photo). Eventually some individuals encroached past the closure area. Targeted, selective arrests were made. Some limited crowd control munitions were deployed, including inert smoke canisters. After the arrests and munitions were deployed, the officers again retreated attempting to deescalate.

Officers in the sound truck used their loudspeaker to warn the group to back off the city property, keep the demonstration peaceful, and the ask crowd to police itself. However, individuals within the group continued to increase their attacks in an attempt to goad the officers into responding. Individuals were seen using lacrosse sticks to launch rocks a greater distance. At least two officers were struck with rocks despite their safety buffer. A ball bearing struck the loudspeaker truck almost a full block away. A van parked in front of the neighboring Boys and Girls Club had a window broken by what is believed to be a golf ball (photos).

Numerous people with “press” markings encroached on the closed area. One person with “press” written on their garments deflated another police vehicle tire (photo). The sound truck made an announcement that Portland Police appreciates them being here to observe and report. They were told that that if they were there as press or a legal observer, they must also move off Northeast Emerson Street and the sidewalks to the north and south of Northeast Emerson Street. Failure to comply with this order may subject them to arrest, citation, and/or use of force, including, but not limited to, crowd control agents and impact weapons.

The group continue to escalate. A fire was lit in the middle of Northeast Martin Luther King Junior Boulevard and was fed with plastic recycling bins, newspaper boxes, and various other debris. A dumpster was pushed into the fire.

Finally, at 1:07a.m., due to the persistent and ongoing criminal acts, the PPB sound truck issued a warning that the event was being declared an unlawful assembly and that all community members in the area should leave to the south. Officers moved up to physically move the crowd. Almost immediately the officers were pelted with objects including rocks. At 1:10a.m., a riot was declared. More warnings were given. Officers moved the crowd to the south. One vehicle tried to run over some officers, but was unsuccessful in injuring them. An officer was injured when she was struck by a rock that had been thrown. Green lasers targeted the PPB Air Unit.

Officers moved the crowd several blocks and retreated, but many returned. Officers initiated another push and the crowd eventually dispersed except for a few people who remained. One was shot with a sponge-tipped less-lethal round after he was seen throwing rocks at officers. He was subsequently provided with medical treatment and arrested.

One officer suffered a laceration to her leg by a thrown rock that hit her. Another officer’s ankle was sprained. Others suffered various bumps and bruises.

Various crowd control munitions were used, but no CS gas was deployed.

Arrest information will be released at a later time.

Man seriously injured after crash between pick-up truck and lorry