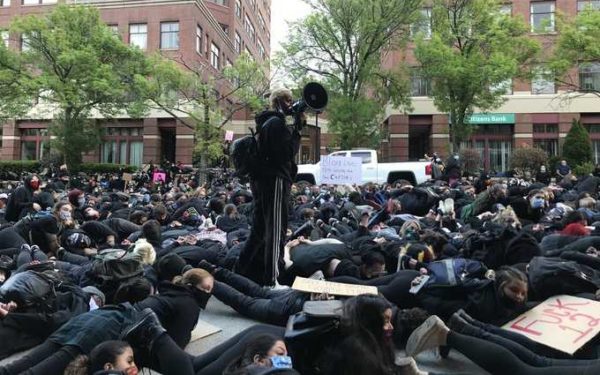 PORTLAND, Maine — Hundreds of protesters converged on the police station on Monday night in the largest and most charged rally yet in Maine prompted by the death of George Floyd and other police killings.

A massive crowd gathered in downtown Portland just after 7 p.m. on Monday and marched three blocks to the Portland police station on Middle Street after organizers said the police took down a memorial erected in honor of Floyd. After laying in the street to stage a massive “die-in” in front of the station, protesters erected the memorial again.

Some proceeded to Franklin Street, a four-lane throughway where a group of protesters surrounded two police vehicles. Many police exited the vehicles to tell them to leave the street. The group dissipated quickly and the rally proceeded to City Hall around 8 p.m.

Portland police Lt. Robert Doherty said he had “never seen anything like this” in more than 30 years on the force and approached protesters to wish them a safe night as they convened. City police had reinforcement from the Maine State Police. Some troopers with batons, helmets and face shields complied with demands from protesters to “take a knee” as they guarded a police vehicle on Congress Street.

Lt. Robert Doherty of the Portland police talks to protesters as they convened on Monday. He said he had “never seen anything like this” in more than 30 years on the force and wished protesters a safe night.

Portland organizers have called for a meeting with Police Chief Frank Clark, who told the Portland Press Herald he had reached out on Monday to activists who organized marches in Portland on Friday and on Sunday. Their response has not been disclosed.

The marches occurred along with protests in dozens of cities across the nation since the May 25 death by asphyxia of Floyd, a black man who died on May 25 white Minneapolis police officer pinned him by the neck with a knee for several minutes. The officer was charged with murder and Floyd’s family ordered an autopsy finding he died of asphyxia.

Maine cities and towns such as Bangor, Belfast and Rockland have also seen protests. Demonstrators marched through downtown Portland Friday and a large group met at the police station Sunday and demanded to speak with Clark, who did not appear.

No violence or arrests occurred, although several people spray-painted graffiti on the station’s brick exterior and garage door on Sunday, according to the Associated Press.

Tay fire department looking to welcome back an old friend

Heeding the call: Truck drivers re-emerge as ‘Knights of the Highway’...