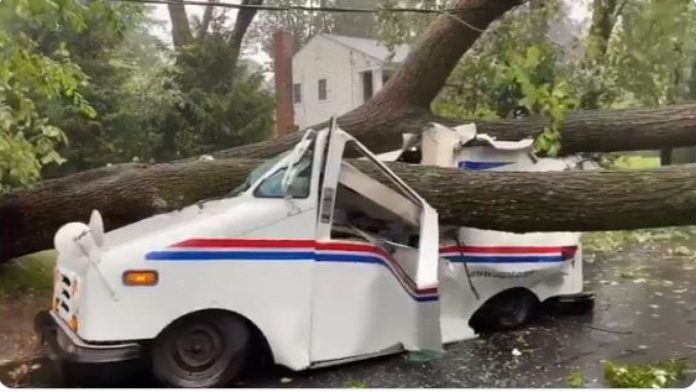 The National Weather Service told CBS2 a tornado touched down in the Cape May County town of Strathmere. Another possible tornado was sighted in Ocean City.

“According to the forecasters, this is a relatively fast-moving system and should be well on its way out of our neighborhood by later tonight and into tomorrow,” Gov. Phil Murphy said earlier this morning.

State offices are closed, and residents are urged to stay off the roads.

“Please, folks, stay in. Unless you absolutely have to go out, stay in,” said Murphy.

Some parts of the state could see up to 5 inches of rainfall, and winds are expected to reach 70 mph along the coast.

Public Utilities Commissioner Joe Fiordaliso cautioned there could be hundreds of thousands of power outages. By 2 p.m., approximately one million customers were in the dark.

“It all depends on the track of this storm, and it all depends on wind gusts. Wind can be our potential enemy here, which can delay, obviously, restoration,” Fiordaliso said. “If those winds are at excess of 30 mph, those folks cannot go up into the bucket trucks and try to restore power.”

Car-pulled trailers and motorcycles are banned from the New Jersey Turnpike and Garden State Parkway due to strong winds.

CBS2’s John Dias spoke with Chris Wood, who owns Woodys Ocean Grille in Sea Bright. He said he’s used to getting through storms on the Jersey Shore, but not during a pandemic. Like most restaurants, outdoor dining has become his livelihood, but it’s not an option Tuesday.

“We opened Aug. 29, 2011 — the day after Hurricane Irene. Fifteen months later, we had Hurricane Sandy,” Woods said. “This is going to hurt a lot of people. No doubt about it.”

Rescue teams are prepping for the possibility of hurricane force winds and tidal surges. The Sea Bright Fire Department rolled out its high water rescue vehicles, and locals were preparing at Bains Hardware across the street.

“Whether it be a tarp, a rope to tie down stuff, that kind of goods,” said owner Frank Bain.

Earlier, others tried to take advantage of the calm before the storm, going for a swim before rip currents become too strong.

“I was worried about it. So we tried to get in early before it hit, and it looks fine,” Mike Halfacre, of Fairhaven, said.

The Monmouth County sheriff said he doesn’t anticipate any shelter operations during this storm, but the county is ready.

“That has been on the forefront of our minds, particularly with COVID-19 and social distancing. So that would present some challenges,” said Sheriff Shawn Golden. “Our emergency management was preparing additional space and additional PPE gear.”

The sheriff went on to say he’s also worried about post-storm. Wednesday is expected to be a sunny day, but beach goers should keep in mind surf is irregular after a storm and rip currents are strong.

CBS2’s Jenna DeAngelis met with the Morris County emergency management director, who said the 911 call center is fully staffed and crews are ready to respond to trees down and other issues.

“We’re asking people to use 911 for true emergencies. We’re concerned about wires that may be down comingled with branches and telephone lines that people may think are safe,” OEM Director Jeffrey Paul said. “Stay safe, stay smart, stay vigilant. If you don’t need to be out, don’t go out.”

Ford May Sell The Bronco R To Race Teams If There’s...