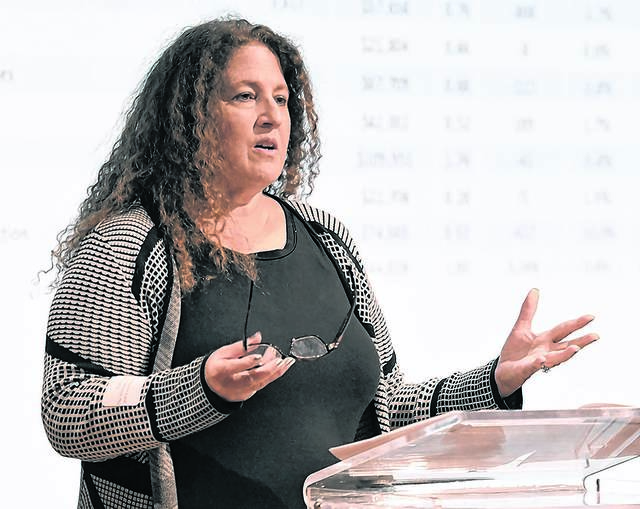 WILKES-BARRE — Teri Ooms, executive director of The Institute for Public Policy & Economic Development, said in the wake of the Great Recession, Northeastern Pennsylvania was left with unemployment rates higher than national and statewide rates – along with relatively slow economic growth.

“As made evident by its consistently lower-than-average wages and higher unemployment levels, the economy of the Lackawanna County and Luzerne County region has historically lagged,” Ooms said. “Some higher wage employment sectors are showing growth, however, and consistent contributions from exports and tourism positively affect the economy.”

Ooms said the region has experienced some net job growth over the last few years, which reflects a falling unemployment rate and an increase in total jobs. She said the aging population is also influencing these economic characteristics.

“The steady rate of workers leaving the workforce due to retirement has resulted in a smaller labor force, though labor force participation among those aged 18 to 64 years has increased in recent years, indicating a favorable environment for job seekers,” Ooms said. “Consequently, wage growth since 2013 has been more rapid than it was in the previous five years of economic slowdown and recovery.”

Ooms quickly noted that all this was of course, pre-COVID.

“We started to see dramatic changes,” Ooms said. “Of all the measures of the economy, one of the most common metrics we see reported in the media is the unemployment rate. While it doesn’t tell the whole story of the economy, it’s an easy-to-understand barometer of the state of the labor market.”

Unemployment has trended significantly downward since about 2012. After the last recession, Ooms said the region saw significant recovery, with the labor market reaching unemployment lows for this economic cycle in 2018 and 2019.

“As we all know, unemployment spiked this year, where we saw rates rise a bit in March as COVID-19 began to broadly affect the United States,” Ooms said. “In April, rates skyrocketed to the highest in many years in both counties — 17.1 percent in Lackawanna, 18.4 percent in Luzerne, and 15.5 percent statewide.”

Ooms said May rates will be released in the coming days, and while she expects to see at least a modest improvement, the unemployment rate is likely to remain elevated in the coming months as the economy recovers.

“There is still much uncertainty going forward, including long-lasting impacts on certain sectors like travel and entertainment, as well as the prospects of a second spike later this year,” Ooms said. “However, the unemployment rate will be one of the gauges we use to track how close we are to getting the economy back to what we might consider normal.”

Ooms added that it’s important to remember that once COVID is past us — which will likely be when a vaccine becomes widely available, perhaps in the third quarter of 2021 — the area will be again forced to deal with a smaller labor force and a qualified workforce will continue to be the key for a successful economy.

Ooms said The Institute’s 2020 Indicators Report on jobs and economy summarizes important economic indicators in Lackawanna and Luzerne counties and in Pennsylvania as a whole. She said the last decade or so has been an era of economic change, including the downturn of the housing market and subsequent Great Recession.

“There has also been increased automation in many industries, as well as shifts toward transportation, distribution and e-commerce,” Ooms said. “All these factors have impacted the region, so understanding economic indicators is of tremendous importance. The trends in the data tell a descriptive story.”

At the time the 2020 Indicators Report was being prepared, Ooms said the COVID19 pandemic was quickly affecting the worldwide economy and job market. She said the impact is anticipated to be severe and far-reaching.

Ooms said The Institute will continue to monitor this impact on the regional economy and workforce as the data becomes available, and provide updated analyses in future Indicators Reports as well as other publications. Many of the data points that follow are expected to change dramatically due to this disruption; as a result, they represent a baseline for future analysis on the impacts of COVID19.

Ooms said the percentage of individuals living below the poverty level is another major issue impacting the region. Poverty levels are closely linked with unemployment and underemployment; when households lose their livelihood, people have difficulty providing their families with basic necessities.

Additionally, low-wage jobs contribute to both poverty and the number of households with income above the poverty line but insufficient as a living wage (the income required for a modest but dignified life). Thus, she said there is great demand on social services and charitable organizations that are themselves competing for limited government and philanthropic funding.

“We also can expect that unemployment, income loss and business closures correlate at least somewhat with poverty rates,” Ooms said. “There are many causes of poverty, and poverty looks different in different types of communities or for different kinds of families. However, when unemployment goes up and a large number of people experience income loss, some will fall into poverty, especially those with lower paying jobs who were close to the poverty line already.”

Ooms said the poverty rate in both counties was just over 14 percent in 2018, lower than five years ago, but still higher than the year 2000.

“Data collected over the next year or two will tell us if COVID-19 and the related loss of income and employment has caused a broader increase in poverty in our region,” Ooms said.

The industry groups assigned as having the highest disruption were Construction, Retail Trade, Arts, Entertainment and Recreation, and Accommodation and Food Service. Ooms said these industries account for 26 percent of regional private employment. Another 25 percent of workers are employed in industries with medium-high disruption.

Though significant variation within each broad category is certain, Ooms said many workers in these industries have likely seen job losses, furloughs, or reduced hours, creating a significant economic ripple effect.

And, Ooms said, the impact of a decline in spending from tourism would have wide-reaching impacts on the region’s economy.

“As we reported in this year’s Indicators Report, as of 2018, visitor spending in the region by business and pleasure travelers was over $1.6 billion, and had been growing year over year,” she said.

Kansas City Non-Profits And Chefs Band Together To Give Away 100,000...