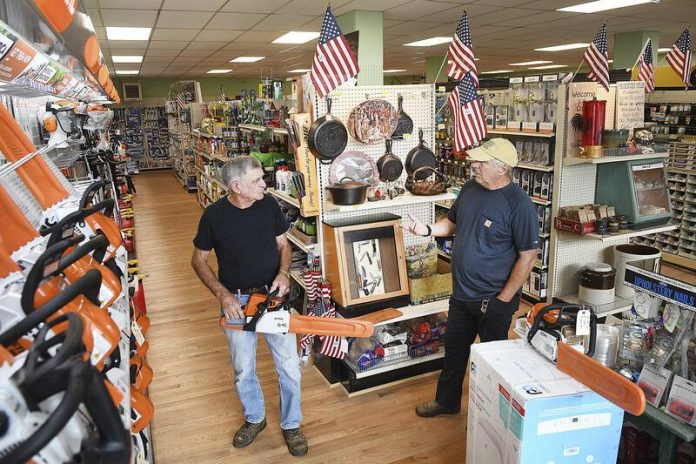 Chris and Anita Wszolek never planned to own the downtown Union business where Monroe County residents have purchased their hardware needs since the 1950s.

They were frequent customers themselves after moving to town in 2013.

But when the fourth-generation owners decided to sell Kittles Hardware and Supply in 2019, the Wszoleks quickly transitioned from customers to owners as they made the decision to preserve the community staple.

The Wszoleks are not Monroe County or even West Virginia natives, but fell in love with a photograph of a home in Union 21 years ago and then with the town when they came to visit.

The couple, who met in 1982 while serving as Naval officers, were living in Saudi Arabia where Chris worked as a project manager for Saudi oil company Saudi Aramco.

He had been in his position since 1992 and he says they began to think about what they might like to do when their time as expatriates came to an end.

He says they began to question if people were happier in the city or in the country.

“We would explore different parts of the countries where we were visiting or living and ultimately we decided, at least in our humble opinions, the happiest people were not in the city,” he said. “They were in the country.”

With that in mind, the couple looked for a historic home – one that needed work – in a country setting, with four seasons.

The Elmwood Estate in Union clicked all of the boxes and in 2000 during a visit to the United States and Monroe County, they decided to call it home one day.

It was during that visit, Chris said, that they first entered Kittles Hardware.

“We greatly admired the store,” he said. “It was stuffed with inventory. The second generation was operating the store then and they had a twinkle in their eye and knew where everything was.

By the time Chris retired in 2013 and the Wszoleks returned to begin their renovation of Elmwood, however, Vernon and his wife Carol had passed away and their son Billy was running the store.

As they renovated Elmwood, which has served as an Airbnb and event venue since 2017, the Wszoleks purchased everything they could from Kittles, but they say it was in decline. And in 2018, Billy passed away.

Chris says they worried the store would close, but Billy’s son kept it going until the summer of 2019.

“He told us he needed to sell so we started looking for a buyer,” Chris said. “But after two weeks we realized he wanted us to buy it.”

The Wszoleks say they never intended to buy a hardware store but decided to give it a shot.

“We realized we’re healthy, we have a little bit of savings left after restoring Elmwood and this is important to the town,” Chris said.

Though renovated, today’s Kittles Hardware still carries with it an old-fashioned feel.

“The front of the store has a beautiful pressed tin ceiling that had been covered for at least 50 or 60 years, so we uncovered that immediately,” Chris said, adding locals gathered on the sidewalk to watch the unveiling.

“Tourists actually come to see the store,” he said, mentioning a man who stopped in with his son because he saw a train in the window.

The blue 1952 Chevrolet pickup truck he parks out front to serve as a store mascot also attracts attention.

“Some guy stopped in because he wanted to talk about old trucks,” he said. “People stop all the time.”

And though the window decorations and curb appeal are important, the Wszoleks say the merchandise inside Kittles is the most important.

The couple say they offer a little something for everyone as they tout women’s gardening gloves and tools, gifts, cards and wrapping paper.

“Our sales to women are probably 35 to 40 percent of the total,” Chris said, explaining very few women shopped in the store when they took it over.

Gifts, grills, antiques and garden items are all available, but hardware is the bread and butter.

Chris says Kittles had been a True Value store since the 1950s but is now an independent hardware store supplied by Ace Hardware.

He explains they offer items ranging from nuts and bolts to lightbulbs, cleaning solutions and paints.

In addition to offering new items, Chris says a section of Kittles’ 15,000 square-foot building, which housed Model-Ts and General Motors before becoming a hardware store, is used for repairs.

“We’re working on a hardware store museum on the second floor because of all the interesting things we’ve found from the Kittles,” he said, explaining the room will feature old items and unsold stock. “We built shelves to simulate the original store. When it’s finished, probably in the fall, anyone who wants to go upstairs can look around.”

Although they say they didn’t envision adding “hardware store owners” to their resumes, the Wszoleks say they’re enjoying their new venture.

“We call it our joyful disaster,” Chris said. “Now it’s not so much of a disaster anymore. It’s mostly just joyful. It’s hard work, but it’s joyful.”

They say they’re happy with the decision to settle in Monroe County, which they describe as diverse with “a lot of kindness.”

“Everyone is so supportive and excited about what we’re trying to do,” Chris said.

They both say the store has been a fun adventure and encourage anyone who hasn’t visiting to stop in.

Kittles Hardware is located at 405 Main Street in Union.