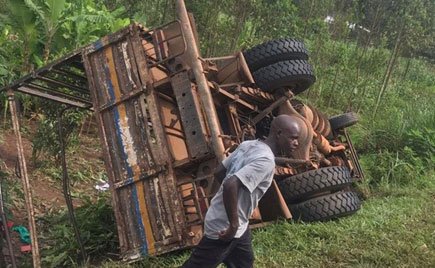 LUWEERO- A prison warden on Friday died in a road accident at Bajjo village, Bombo Town Council on the Kampala-Gulu Road in Luweero District.

Savana Region Police Spokesperson, Mr Issah Semogerere identified the dead Prisons staff as Edgar Tumuhimbise who died on spot when a Prisons truck that was transporting 40 prison stewards from Luzira Prison to Nakasongola Prison in Nakasongola District overturned after skidding off the road at about 9:00am.

“The injured prison staff were transferred to Bombo Military Hospital while those who escaped unhurt proceeded to Nakasongola Prison,” he said.

In February, a road accident involving a Prisons truck and a commuter taxi claimed 14 people on the same road.

Latino grocer feeds community after setback of its own