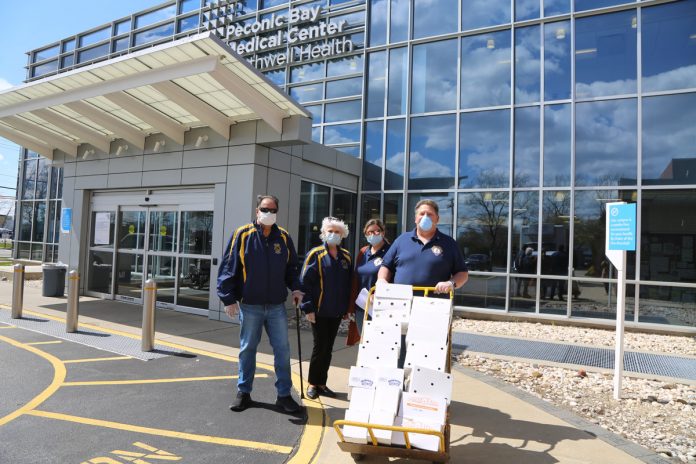 A new initiative by local Lions Club organizations aims to make life on the frontlines of battling COVID-19 a little sweeter.

At Peconic Bay Medical Center in Riverhead on Wednesday, a team of volunteers from the Southold Lions Club unpacked an ice cream truck filled with 500 assorted ice cream bars to give to hospital staff. Before arriving at PBMC, the ice cream truck made a stop at Stony Brook Eastern Long Island Hospital in Greenport, where a group from the Mattituck Lions Club did the same.

“We call it ‘Project Sweetness,’” said Marianne Tremaroli of Huntington, who serves as the Lions’ district governor for Suffolk County. The program, which will continue for the next two Wednesdays, will provide the treats to staff and patients at nine hospitals across Suffolk County.

Ms. Tremaroli said it was made possible by a $200,000 grant from Lions Club International, $18,500 of which was directed to Suffolk County.

Judi Perez, president of the Southold Lions Club, unloaded the boxes in the hospital’s lobby, where the walls are adorned with colorful messages staff said were sent in by families from all over the area.

It’s part of a growing effort to donate not only Personal Protective Equipment and gear to frontline workers, but to show appreciation by picking up lunches or dinners. “We figured since everyone is doing food, let’s do sweet,” Ms. Perez said.

Of the 500 bars, she said 400 were purchased by the Lions organization and the supplier, Hershey’s Ice Cream, of East Northport, contributed an additional 100 for each donation stop.

Steve Ammirati, current president of the Mattituck Lions Club, said Thursday the project is a great way to recognize workers on the front lines of the pandemic.

“No matter what, the North Fork always rallies around each other, no matter what the issue,” he said.

Ms. Perez and her husband, Jose, hope to be able to expand the initiative to include local nursing homes as it continues.

Deputies Locate Sam’s Club Robbery Suspect, In Another Jail For Another...

Details emerge on father who drove truck off cliff with toddlers...

Illinois police agencies has spent $4.7 million in military gear since...