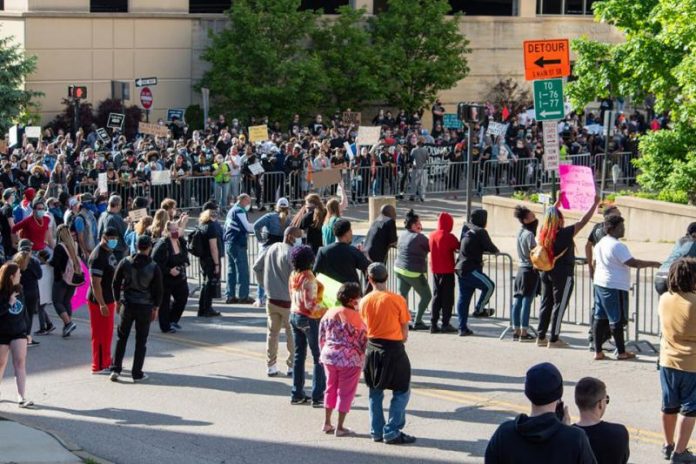 A Tallmadge teen is recovering after being hit by a pickup truck during protests last Saturday in downtown Akron.

Sam Borrell, 18, and some of his friends had gone to Akron during the day to participate in a peaceful demonstration protesting the police killing of George Floyd in Minneapolis.  Akron police are continuing their investigation into what happened. The driver of the pickup is not facing charges at this point.

Borrell talked about his experience.

Sam Borrell, 18, talks about being struck by a pickup while participating in last weekend’s protest in Akron.

SAM BORRELL: I’ve always felt very passionate about what’s been going on. And once I saw the videos of the George Floyd killing, it just was really upsetting. And then the last week, it’s just more and more stuff keeps coming out. I thought I had to be there. Sometimes it’s just hard to feel optimistic about the future.

JENNIFER CONN: So you guys gathered together at a friend’s house and you made signs and stuff. Were you carrying a sign?

JENNIFER CONN: What did it say?

JENNIFER CONN: So you went downtown?

SAM BORRELL: Yeah. We started at the police station. Right before I got there, I know the mayor spoke.

JENNIFER CONN: Did you guys start moving then?

SAM BORRELL: Yeah, we marched for probably about 45 minutes over to Akron. On Exchange, they had a police car out in front of the protesters and then one behind and they kind of moved with us the whole time. And we went back to the police station, and at that point, the police came out with riot gear. They didn’t do anything, but I think the crowd felt scared. That’s when we moved down.

JENNIFER CONN: Were protesters saying anything to the cops at that point?

SAM BORRELL: They were shouting, some were shouting, just absurdities and shouting angrily. But some really just wanted the cops to kind of understand and like kind of join our side.

JENNIFER CONN: Did any of the cops seem like they were interested in that having that kind of dialogue?

SAM BORRELL: No, some laughed.

JENNIFER CONN: Because they had the riot gear on and you were kind of intimidated by that, where did you go? You went back toward downtown toward Main Street?

SAM BORRELL: Yeah, that was probably about right after we shut down that intersection at Main and Market. Some people were sitting down in the intersection. And then right before the truck did the U turn, someone was starting to speak with the megaphone. I was right in front of where the truck was. And by the time basically by the time I saw him doing a U turn, he was on top of me. So I just held on to the hood and tried not to go under. I got up. And then I guess I took a few steps, and then I collapsed. And they said, I lost consciousness for a little bit.

JENNIFER CONN: What was the extent of your injuries?

SAM BORRELL: It was a broken arm and a concussion. And then I was covered in road rash. We thought I was going to need surgery for the arm. It turns out, I shouldn’t.

JENNIFER CONN: Will you protest in the future?

SAM BORRELL: Of course, I wish I was out there now.

JENNIFER CONN: What’s it been like since then? Have people have been trying to seek you out to find out how you’re doing?

JENNIFER CONN: In light of what happened to George Floyd. What would You like to see happen in the community.

SAM BORRELL: I’d like to see some community leaders and maybe the police try to open more of a dialogue

SAM BORRELL: Not at all. I think when I was there, everyone I saw had the same intention that was just to bring light to the issues. No one was instigating violence except the police when I was there. And from what I saw the rest of the day.

JENNIFER CONN: What would you say to the people who were breaking windows and throwing rocks and damaging property after dark on Saturday night? What would you tell them?

SAM BORRELL: They make us look bad. We’re witnessing history. And I think people need to realize that everyone will remember this week for the rest of their lives. And now’s the time to show your true colors.

JENNIFER CONN: What do you want those colors to be? What’s the change you want?

SAM BORRELL: I just want people to have empathy.

A video posted on Facebook captured the incident when Sam Borrell was struck:

Truck drivers are essential workers, too