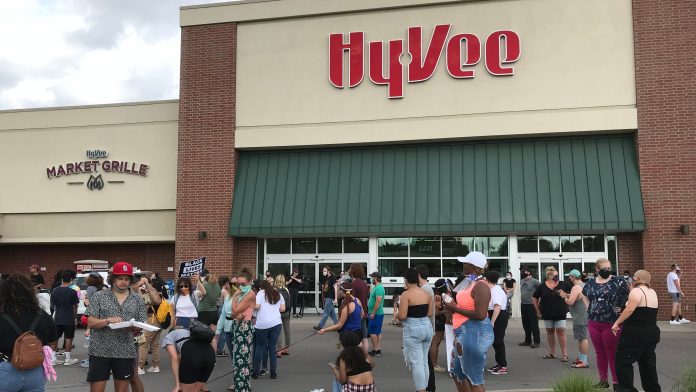 A man attempted to leave the Hy-Vee parking lot by driving through protesters on June 20, 2020.

More than 50 demonstrators blocked the entrance at Hy-Vee on S.E. 14th Street Saturday afternoon to support a former employee who says she experienced racial discrimination at work and was made to take down a Black Lives Matter sign at her cash register. But after moments of tension with customers, management, and police, the protest took on a block party atmosphere, ending with protesters leaving after a few hours.

Jassma’ray Johnson, 19, said she quit her part-time job about a week and a half ago after three years at Hy-Vee. The protest organizers, which included Des Moines Black Lives Matter leaders and others, shared several demands on Twitter.

A man driving a white truck attempted to drive through a group of protesters after 3 p.m and refused to move until a police officer asked him to back up and choose a different exit. The crowd chanted “arrest him” as the man reversed and parked nearby. There were at least two more confrontations between drivers and protesters who sealed parking lot entrances.

Des Moines Police officers shut themselves inside the store, and no customers were allowed to enter. Two managers asked the crowd to move to a designated part of the parking lot to protest, but the people refused.

As the day wore on, some demonstrators began playing music, but other protesters spraypainted a police car.

Demands posted on Twitter called for employees to get raises during the coronavirus pandemic, for part-time employees to get paid time off, for managers involved in harassment and discrimination to be fired, and for the store to issue a public apology for “the unfair treatment of employees and customers.”

Johnson also said employees don’t get enough protection and pay during the pandemic, putting themselves and customers at risk.

A Hy-Vee spokesperson confirmed to the Des Moines Register on Thursday that seven employees are out sick, but did not say how many have COVID-19. The spokesperson did not commit to sharing future cases with the public but said it is policy to directly notify anyone who could have been exposed.

“Should an employee of ours be exposed to anyone with COVID-19 that we are aware of, our protocol is to immediately notify any individuals who may have been in direct contact with that individual,” Hy-Vee public relations director Christina Gayman said in an email.

Hy-Vee employees got a 10% bonus on their pay between March 16 and May 3, past news releases show.

A photo of an internal memo was also shared on social media, and a Hy-Vee spokeswoman confirmed its authenticity. The letter states that, in anticipation of Saturday’s protest, a portion of the parking lot would be marked off for demonstrators. Employees working at the Park Avenue location on Saturday got time-and-a-half pay, and customers got a 10% discount, the letter said.

Another Hy-Vee spokeswoman, Tina Potthoff, said in a statement to the Des Moines Register during the protest that the timeline of Johnson’s claims is “disappointing.”

In part, the statement reads: “We do not tolerate harassment or discrimination, and have a process at both the store and corporate level for employees to report any issue. While we cannot comment directly on any specific case, we have tried multiple times to speak with Jassma’ray “Jazzy” Johnson to discuss her situation but to no avail. This is apparent by her Facebook posts of the messages from our employees trying to connect with her.

“It’s disappointing that she took these concerns to social media versus addressing them with anyone in the company, which has now led to today’s event.”

Johnson said the company is doing too little, too late. She said a corporate employee has texted her but she did not feel comfortable meeting with them alone because she didn’t know them, according to a Saturday interview and a screenshot of the conversation that was posted to social media.

“They’re a corporation and I’m 19 years old,” she said. “If I can find this stuff out and call it out, they know what they’re doing.”

“We came to shut down Hy-Vee for a specific reason, in solitary with our sister, to uplift our sister, and to uplift all the other Black people and really the public in general who they’ve been terrorizing and putting in serious risk,” Bruce said. “What everyone is doing is really changing the world and making it a better place. I never could have thought I would see this in my hometown, everyone coming around each other to lift each other up and demand that we all be treated with respect and dignity.”

After protesters left in pairs to their cars, police, and managers returned outside and quickly dissembled a row of shopping carts outside the entrance.

One protester, Tarmia Weeks, 32, said the beginning of the event, when some customers confronted protesters with their cars, was scary. But as the protest turned into a dance party, Weeks said it was another reminder of the community support.

“I just hope after all these protests and all these demands, something eventually changes,” she said. “I just don’t know how long it’s going to take.”

Shelby Fleig covers Des Moines’ western suburbs for the Register. Reach her at shelbyfleig@dmreg.com or 515-214-8933. Your subscription makes work like this possible. Subscribe today at DesMoinesRegister.com/Deal.

Return to Sanhok as PUBG Season 8, new Challenger and Payback...