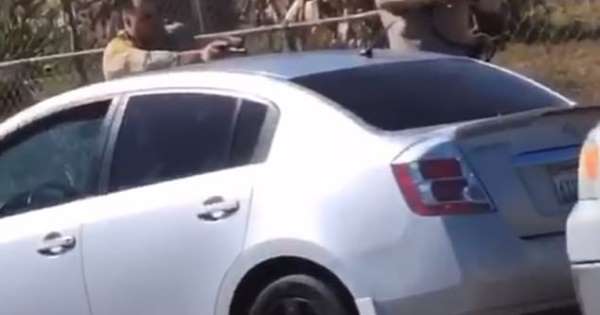 A black man was shot and killed by sheriff’s deputies in South Los Angeles on Monday afternoon shortly after dropping a handgun as he punched one of the officers in the face, police said.

A crowd of between 70 to 100 protesters have since gathered on the scene of the fatal shooting in Westmont to demonstrate against the lethal use of force.

The man, who has not yet been named, was observed by deputies riding a bike down along 110th Street and Budlong Avenue, when they made a U-turn in their vehicle to approach him for apparently violating an unspecified vehicle code.

Lt. Brandon Dean said it was at this time that the man jumped off of his bike and began running northbound toward 109th Place, when deputies briefly lost sight of him.

The man was found shortly afterwards a few blocks away at which time Dean says the officers attempted to make contact with him.

As they approached, Dean said the man, who was clutching items of clothing in his hands, punched one of the officers in the face and then dropped the items he was carrying.

‘The deputies noticed that inside the clothing items that he dropped was a black semi-automatic handgun,’ Dean said during a Monday conference.

The two officers then both opened fire and the man, striking him several times.

© Provided by Daily Mail
The man, dressed in a white tank-top and pants, is seen lying face down in the road by the right-rear tire of a silver pick-up truck


Dean was unable to confirm how many times the man was hit and where, as ‘we have not been able to move the body yet as we were waiting for the coroner’s office.’

The man, identified only as a black man in his 30s, was pronounced dead at the scene. No deputies were injured during the incident.

‘We still have to conduct our interviews of the investigating officers to see exactly what happened and transpired during the deputy-involved-shooting,’ Dean told reporters when pressed about what prompted the deadly use of force.

‘But if this individual was reaching for a semi-automatic handgun, I would suggest that, you know, that’s probably why deadly force was important,’ he continued.

The man’s black semi-automatic handgun was recovered at the scene, officials said.

Investigators remain at the area investigating the scene of the shooting along the 200 block of West 109th Place, speaking with witnesses and canvassing the area for any surveillance cameras that may have caught the incident on camera.

Dean was unable to specify what vehicle code officers believed the man had violated when riding his bike, citing the ongoing investigation.

‘Give us time to conduct our investigation,’ Dean said. ‘We will get all the facts of the case out and eventually present them.’

A large group of demonstrators have since gathered at the scene of the shooting at the behest of Black Lives Matter LA, who tentatively identified the victim as Dijon Kizzee. His identity has not been confirmed

‘Los Angeles County Sheriffs killed a Black man…Dijon…on 109th and Budlong and left his body facedown in the dirt. We need all hands on deck. Please get here ASAP!’ the group tweeted just after 6pm local time.

The LA County Sheriff’s Office say they are concerned about crowd control overnight as they hope to avoid the violent protests spurred in a number of states across the country following the shooting of Jacob Blake in Kenosha last weekend.

The sheriff’s department station had set up a perimeter of tape around its South LA headquarters as of Monday evening.

Officers in riot gear were also pictured at the scene of the demonstration. No incidents have so far been reported.

Unlike the LAPD, Los Angeles County sheriff’s deputies are not equipped with body cameras at this time.

However, in footage of the incident posted to social media, the man is seen running from two officers. The video then cuts to both of the officers aiming their firearms at the downed suspect having seemingly just shot him.

Cries of bystanders heard in the background of the clip, with one woman heard screaming ‘why would you do that?’ and ‘Black Lives Matter.’

The man, dressed in a white tank-top and pants, is seen lying face down in the road by the right-rear tire of a silver pick-up truck. The officers are stood more than 12 feet away from his body, still aiming their weapons.

The man recording the footage claims the officer shot the man ‘like twenty times’.

Bystanders continue to heckle the two officers. The main filming the video calls out asking why the officers who shot the man were still aiming their guns, insisting ‘he’s dead already’.

The two officers make no attempt to approach the man to administer CPR until back-up arrives.

A group of four officers then move towards the man, with their weapons drawn, before handcuffing him and administering first aid.

The man was pronounced dead at the scene shortly afterwards. His body remained in the street for several hours as an investigation was carried out.

Footage from above captured by KTLA5 showed a pink tarp had been used to partially shield the man’s body from public views.

No further information is currently available on the incident.