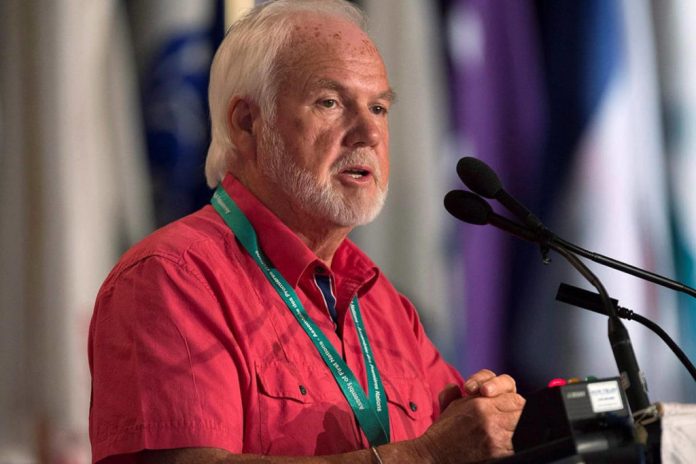 The death of Rodney Levi of the Metepenagiag Mi’kmaq Nation in an RCMP shooting Friday night in New Brunswick continues to put the focus on police relations with Indigenous communities in Canada.

Here’s a look at major stories on the subject in the past month:

Roger Augustine, the regional chief representing New Brunswick and Prince Edward Island, said Levi was shot near the community, about 30 kilometres west of Miramichi. He added that Levi was a relative, saying he has a grandson in the area who shares Levi’s last name.

The RCMP said officers responded to a complaint about an “unwanted man” in a home near the community at 7:40 p.m. local time

“When police arrived, they were confronted by a man who was carrying knives,” said RCMP Cpl. Jullie Rogers-Marsh.

She said officers used a stun gun several times but were unable to subdue the man.

RCMP dash-cam footage was released publicly Friday as part of a court application to stay criminal charges against the chief of the Athabasca Chipewyan First Nation.

It shows a Mountie charging at an agitated Adam, tackling him to the ground and punching him in the head in Fort McMurray, Alta.

The 12-minute video from early on March 10 shows a black truck idling outside the Boomtown Casino in downtown Fort McMurray in the glow of flashing police lights.

Adam can be seen walking back and forth between the truck and an RCMP cruiser, shouting profanities at an officer out of view. The chief tells the officer to tell his sergeant: “I’m tired of being harassed by the RCMP.”

“Sir, just return to your vehicle. I’ll come talk to you in a minute,” the Mountie replies.

A few minutes later, after some arguing, Adam gets out of the truck’s passenger seat and takes off his jacket as he strides toward the officer. A woman in the driver’s seat gets out and Adam crouches as though bracing for a fight.

There is more arguing and Adam gets back into the passenger seat. The officer is seen pushing the woman against the truck and yanking her by the shoulder as she shouts, ”Ow!”

“Hey! Leave my wife alone! You come for me,” Adam says, before swatting the officer’s hands away from the woman.

The second officer charges at Adam shortly after and tackles him to the ground.

Police are defending the actions of officers who kneed and kicked a man while arresting him and are reaching out to Indigenous leaders to discuss what happened Thursday.

A blurry, 74-second video taken by a bystander and posted online shows three officers in Winnipeg struggling to turn a man on the ground over to handcuff him.

One officer knees the man in the back twice. A fourth officer walks up and kicks the man two times in the shoulder. One officer deploys a Taser while another puts a foot on the man’s shoulder.

The man is soon in cuffs.

Kevin Walby, an associate professor of criminal justice at the University of Winnipeg, said the video shows problematic behaviour, since the suspect was already on the ground when he was kneed, kicked and shocked with a Taser.

“All three of those uses of force come after the person is already detained and restrained,” Walby said.

“He’s squirming around a little bit, but you tend to do that when you’ve got three people with their knees in your back and on your pressure points.”

The Winnipeg Police Service on Friday released a longer and clearer video taken from nearby security cameras and held a news conference about the use of force.

Const. Jay Murray said officers were responding to multiple reports of a man armed with a gun and high on methamphetamine who was threatening pedestrians during Thursday’s morning rush hour. He said the man had broken a large granite slab and busted a window at the Centennial Concert Hall to break in.

Murray said that officers saw a suspect throw what appeared to be a handgun to the ground. The suspect refused orders to get on the ground, he said.

“Officers struggled to place the male into handcuffs. While struggling with the officers, a knife and a heavy bar were located on the male.”

Flinn Nolan Dorian, 33, has been charged with several offences, including possession of a weapon.

A 26-year-old Indigenous woman from British Columbia, Moore was shot and killed by police in Edmundston, N.B., on June 4.

The Edmundston Police Force said it received a request to check on a woman’s well-being at an apartment building. The force said the officer who responded to the call encountered a “woman holding a knife who made threats.”

Moore had moved to the community three months ago to be near her mother and six-year-old daughter.

Nora Martin, Moore’s grandmother, and her sister, Grace Frank, have said they doubt the police version of events as Moore was a petite woman who they say was not violent.

“We have to know the circumstances. We can’t go with what the RCMP say. We don’t believe that Chantel attacked him. There’s no way in the world she would attack anybody,” said Martin.

“She had no mental health issues.”

Nunavut is planning its own civilian police review agency over concerns that Inuit are too often treated badly by RCMP.

Video surfaced on social media last week that showed an apparently intoxicated Inuit man being knocked over by the door of a slowly moving police vehicle before being arrested. He was taken to the detachment lockup in Kinngait, formerly Cape Dorset, where he was beaten by a fellow prisoner badly enough to be flown to hospital in Iqaluit.

The man was not charged with anything.

“I was outraged. I was angry. I was hurt,” Nunavut Justice Minister Jeannie Ehaloak said.

A 29-year-old Black and Indigenous woman, Korchinsky-Paquet died when she fell 24 storeys from a balcony while Toronto police officers were in her apartment on May 27.

Her family has questioned the role of police in her death. Korchinsky-Paquet’s mother has said she called police to the apartment and asked them to take her daughter to the Centre for Addiction and Mental Health.

Want to support local journalism during the pandemic? Make a donation here.