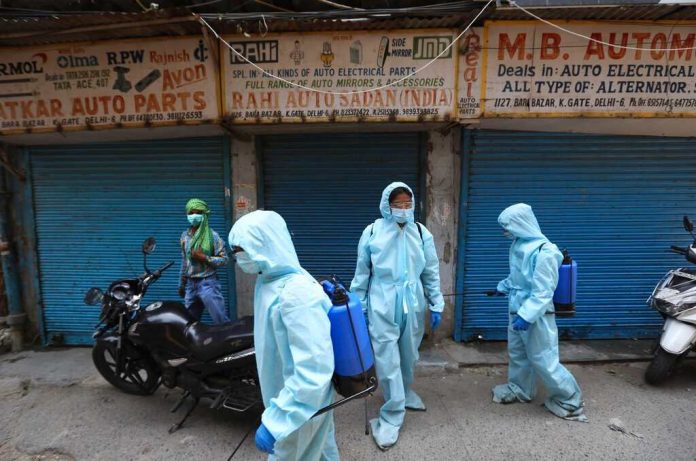 Coronavirus Outbreak LATEST Updates: The Indian Railways has excelled on its own promise of running Shramik Special trains by running 204 of them in a single day, said Railways Minister Piyush Goyal on Wednesday.

Goyal, through a tweet, stated that going beyond the promised 200 Shramik Special trains per day, the Railways had run 204 such trains on 19 May to enable migrants, stranded due to the COVID-19 lockdown, to return to their native states.

“An official of Rohini jail has tested positive for COVID-19. The personnel who live nearby him in staff quarters will also be asked to do self-quarantine at home for 14 days,” said Tihar jail official, reports ANI. The total number of positive cases at the Rohini Jail stands 17 which includes 15 inmates and two jail officials.

Kerala government has decided to postpone the SSLC or Class 10 and Plus two or Class 12 examination until first week of June after the Centre extended the coronavirus-induced lockdown until 31 May.

The union government’s guidelines will come in the first week of June. The Chief Minister’s Office said the date would be decided after that.

In a period of two weeks, as many as 74,118 people travelled back to Assam while, 17,488 left the state, said Additional DGP GP Singh on Wednesday, who has been appointed as the nodal officer for inter-State transportation of stranded people of Assam.

With 37,136 confirmed cases of COVID-19 so far, Maharashtra remained worst-affected state across the nation, followed by Tamil Nadu with 12,448 and Gujarat with 12,140 cases.

Maharashtra continued to remain the worst COVID-affected state with 37,136 confirmed novel coronavirus cases, according to the latest data from the Union Health Ministry.

The state reported 1,325 COVID-19 deaths so far while, 9,639 patients have recovered taking the recovery rate to 26 percent.

India registered highest single-day spike in COVID-19 cases with 5,611 in the past 24 hours, according to the latest data released by Union Health Ministry on Wednesday. The overall count across the nation was now at 1,06,750.

The COVID-19 toll climbed to 3,303 after 140 more patients succumbed to the viral infection as of Wednesday.

Expressing grief over the death of farmers in Etawah truck accident, Uttar Pradesh chief minister Yogi Adityanath announced an ex-gratia of Rs 2 lakh each to the families of the victims and Rs 50,000 to the injured.

Six farmers were killed and one was injured after the pickup-truck in which they were travelling collided with another truck in Friends Colony area of Etawah, in Uttar Pradesh, on Tuesday night.

The number of confirmed cases in India crossed the one lakh-mark on Tuesday as the country reported 4, 970 fresh infections and 134 fatalities .

Health ministry officials said that it has taken much longer for the country to report over a lakh cases as compared to other countries and the death rate due to the virus has also remained comparatively low.

The Union health ministry, in its  8 am update, said the total number of confirmed cases has reached 1,01,139 and the toll has risen to 3,163. This marked an increase of nearly 5,000 cases and 134 fatalities in a 24-hour period. As many as 39,174 people have been cured of the viral infection and the number of active cases in the country stands at 58,802, according to the health ministry website.

Of the 134 deaths reported since Monday morning, 51 were in Maharashtra, 35 in Gujarat, 14 in Uttar Pradesh, eight in Delhi, seven in Rajasthan, six in West Bengal, four in Madhya Pradesh, three in Tamil Nadu, two each in Punjab and Jammu and Kashmir, and one each in Bihar and Telangana.

The ministry also states that more than 70 percent of the deaths are due to comorbidities, or the existence of multiple disorders in the same person.

Separately, the health ministry said that for every one lakh population, there are 7.1 coronavirus cases in India so far, as against 60 globally.

Referring to data from the World Health Organisation (WHO), the ministry said 45,25,497 COVID-19 cases had been reported worldwide till Monday, which is about 60 cases per lakh population.

Among the countries with a very high load of coronavirus cases, the US, with 14,09,452 instances of the infection so far, has around 431 cases per lakh population. In the UK, this ratio is 494 cases per lakh and for Italy it is 372.

Officials also cited data about India having taken 64 days for the count of confirmed cases to increase from 100 to one lakh, which was more than double the time taken by countries like the US and Spain.

According to the data sourced from the health ministry and Worldometers, the coronavirus infection cases increased from 100 to 1,00,000 in the US in 25 days, while it took 30 days for the cases to reach the 1 lakh-mark in Spain, reports PTI.

It took 35 days in Germany, 36 days in Italy, 39 days in France and 42 days in the United Kingdom for the coronavirus infection cases to rise from 100 to 1 lakh, respectively.

Reeling off further data, officials said India has so far an average of about 0.2 COVID-19 deaths per lakh population as against the global average of 4.1.

The officials further said a record number of 1,08,233 samples were tested for COVID-19 on Monday, taking the overall count of tests to more than 24 lakh.

While the total count of tests in India is estimated to be the seventh largest in the world, after the US, Russia, Germany, Italy, Spain and UK, the country ranks much lower at 139th place in terms of tests per million population, as per data website Worldometer. The countries having done more tests than India per million population include Russia, Italy, Australia, Singapore, Norway, Switzerland, UK, Germany, US, Canada, France and Sweden.

As per the latest data, more than 48 lakh people worldwide have tested positive for the deadly virus ever since its emergence in China last December, while nearly 3.2 lakh have lost their lives. Over 18 lakh have recovered too. More than 15 lakh cases have been reported in the US alone, while over 90,000 have died there.

There are concerns that in some parts of the country, including in Kerala, Goa and some north-eastern states, a second or third wave of the virus outbreak  is emerging as these states had almost flattened the curves till a few days ago before people from other states or countries started arriving there.

Kerala on Tuesday recorded 12 more COVID-19 cases, all being returnees from overseas and other states, taking the total active patients to 142. Chief Minister Pinarayi Vijayan said the rise was expected but asserted community transmission has not happened so far. All those who tested positive had come from outside the state—four from abroad and eight from other states, including six from Maharashtra, Vijayan told reporters.

Since 7 May, when the first repatriation flight from the Gulf landed, several of the Keralites who returned home after being stranded in foreign countries and in other states such as Maharashtra and Tamil Nadu, which have a high number of COVID-19 cases, have tested positive. On Monday too, as many as 28 returnees had tested positive.

The National Capital recorded 500 more cases, taking its tally to 10,554, while its death toll has now risen to 166. In Assam, 20 people tested positive, taking the total number of cases in the state to 135. All the new patients were in different quarantine centres across districts. These included people having returned from Chennai and Darjeeling.

At least two COVID-19 related deaths were reported in Andhra Pradesh, taking the toll to 52, while 57 more tested positive. With this, the total number of infections in the state has reached 2,489. Fresh cases include those linked to the Koyambedu market in Chennai, which has become a major hotspot of the deadly virus infection.

Karnataka recorded its biggest ever single-day rise with 127 new cases. Of these, 91 have inter-state travel history from neighboring Maharashtra, the state government said.

Two days after the Centre announced an extension of the nationwide lockdown till 31 May, the Maharashtra government on Tuesday issued guidelines demarcating the state into red and non-red zones and allowing shops, public transport in the non-red zones.

According to the guidelines, which come into force from 22 May,the municipal corporations in the Mumbai Metropolitan Region (which includes Mumbai, Thane and surrounding towns), as well as civic bodies of Pune, Solapur, Aurangabad, Malegaon, Nashik, Dhule, Jalgaon, Akola and Amravati fall in the red zone. In the red zone, no rickshaws, taxis or cabs have been allowed to ply while shops can function according to guidelines issued earlier.

The Jammu and Kashmir administration too issued orders categorising districts into orange, red and green zones and issued guidelines for the fourth phase of the lockdown. According to ANI, hospitals, clinics and liqour shops will be allowed to open across the Union Territory while canteens/eateries at bus stands, railway stations and airports have also been allowed to open in the UT, but with passes in Red districts.

In Delhi, where lockdown relaxations kicked in, several markets were buzzing with activity, but many shopkeepers complained of less inflow of customers even as confusion over opening up of establishments using the odd-even formula prevailed.

The new guidelines for the Shramik special trains issued by the Centre did away with the mandatory consent from the destination states. According to the fresh SOP, the train schedule, including stoppages and destination, shall be finalised by the railways ministry based on the requirements of states and UTs, and shall be communicated to states and UTs for making suitable arrangements for sending and receiving such stranded workers. Officials explained that the Ministry of Railways will ensure more halts of the special trains for the convenience of migrant workers.

Sending states and UTs, and the Ministry of Railways will ensure that passengers are compulsorily screened, and only asymptomatic passengers are allowed to board the trains, it said. During boarding and travel, all passengers will have to observe social distancing and will have to adhere to health protocols prescribed by the destination state or UT on arrival, the SOP said.

With inputs from agencies