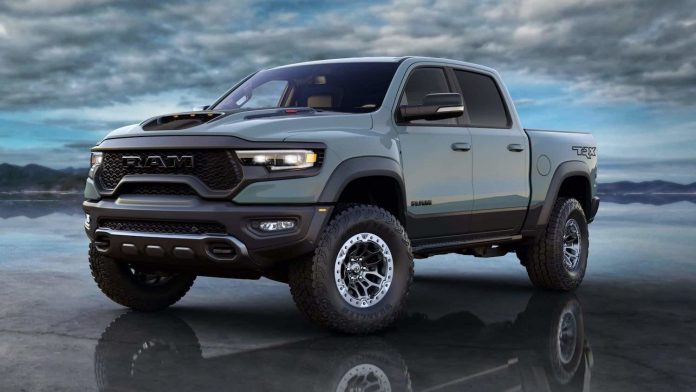 Trucks are big, powerful, and capable. But the Ram 1500 TRX and Ford F-150 Raptor are bigger, more powerful, and more capable. These aren’t normal trucks. When Ram revealed the insane off-road-specced 1500 TRX, comparing it Ford’s Raptor was an easy given. The F-150 Raptor has been the champion of full-size off-road trucks since its release for the 2010 model year. Ram wants that title and is using 702 horsepower to claim it. But power isn’t everything for these types of trucks; they have to crawl through rocks, jump sand dunes, traverse mud pits, creep through high water, and plow through snowbanks. It takes a lot of engineering to make a 3-ton truck do that. Below, we compare both crazy trucks. Is the TRX the new champ? Decide for yourself.

Ford’s Raptor is powered by a twin-turbo 3.5-liter V6 engine that churns out an impressive 450 hp and 510 pound-feet of torque. A 10-speed automatic backs the engine. According to Car and Driver, the big truck will hit 60mph in 5.1 seconds on its way to a quarter-mile time of 13.9 seconds at 99mph. If you have towing or hauling duties, the Raptor can tow up to 8,000 pounds and has a payload capacity of up to 1,200 pounds. However, all that can soon change if the rumors of the upcoming Raptor getting the Mustang Shelby GT500’s supercharged V8 are true.

Under the TRX’s hood, you’ll find the famous Hellcat supercharged 6.2-liter V8, which produces a whopping 702 hp and 650 lb.-ft. of torque in this configuration. An 8-speed automatic does the shifting. Third-party testing has yet to be done but Ram, claims the TRX has a zero-to-60mph time of 4.5 seconds and a quarter-mile time of 12.9 seconds at 108mph. That’s significantly quicker than the Raptor, but that’s due to the huge power difference. However, towing and payload are almost identical. Maximum capacity is 8,100 pounds for towing and 1,310 pounds for payload.

Off-road-specced trucks need high-end suspension in order to handle the worst owners throw at them. Ford knows this and gave the Raptor Fox Racing Shox shocks that are electronically controlled and feature continuously variable compression damping. Up front, you’ll find an upper and lower control arm (double-wishbone) setup with coil-over shocks. The rear end has the traditional leaf springs and solid axle layout. Suspension travel is 13.0 inches up front and 13.9 inches in the rear. A front Torsen differential is optional.

The TRX features Bilstein Black Hawk e2 off-road shocks that are also electronically controlled with continuously variable damping. Front suspension is similar to the Raptor’s double-wishbone setup, but the difference lies in the rear. Out back, the TRX doesn’t use the old-school leaf springs that trucks normally have; instead, Ram gave the TRX a five-link coil configuration. The truck also has a Dana 60 rear axle. Ram says front suspension travel is 13.0 inches and 14.0 inches for the rear, but that could slightly change once the truck hits the production line.

Rubber for the TRX is massive — bigger than the Raptor. The chosen tire is Goodyear Wrangler Territory All-Terrain 325/65 R18, and beadlock-capable wheels are optional. Ground clearance is close, but the TRX just beats the Raptor with 11.8 inches. Approach, departure, and breakover angles are 30.2, 23.5, and 21.9 degrees, respectively. With the exception of the approach angle, the Ram beats the Ford but by the smallest margins. Like the Raptor, the TRX has a 2.64:1 low-range gear ratio, but its transfer case is a BorgWarner unit. The Ram can also cross 32 inches of standing water.

Just because the Raptor is an off-road truck, don’t think it’s low-tech. Ford gave the Raptor plenty of interior, driver-assist, and off-road technology. Inside you’ll find an 8.0-inch center touchscreen, SiriusXM, four USB ports, a vehicle smartphone app, and Apple CarPlay, Android Auto, and Alexa compatibility. The standard instrument panel screen is only 4.2 inches, but you can upgrade to an 8.0-inch one. A navigation system and a 10-speaker Bang & Olufsen audio system are optional.

Ram didn’t put all the money on the 702-hp engine and off-road hardware; they spent plenty of it on interior tech. Standard features are a big 12.0-inch center touchscreen, Apple CarPlay, Android Auto, SiriusXM, a navigation system, a 7.0-inch instrument panel screen, 5 USB ports (including Type C), and a vehicle smartphone app. The list of available tech includes a head-up display, a 19-speaker Harman Kardon audio system, a digital rearview mirror, and a wireless charging pad.

Off-road trucks need cool off-road gear, and there’s plenty to choose from for each truck. You can order your Raptor with Bushwacker fender flares and exterior side and hood Raptor graphics. If you want more, look toward Ford Performance, where you can buy a race series rear chase rack with a light bar, a chase rack in-bed tire carrier, a differential cover, a cat-back exhaust system, LED fog lights, and off-road recovery boards. The TRX also offers TRX exterior graphics on the sides and hood. From Mopar, you can order off-road-style running boards or rock rails. A rear Ram bar (similar to the Raptor’s rear chase bars) and a bed-mounted tire carrier are also available.

How big are they?

The Ford Raptor comes in two body styles: $53,455 is the starting price for the Super Cab, and $56,440 for the Super Crew. The Ram TRX is offered in the Crew Cab (four full doors) body style and starts at $70,095. That’s significantly more than the Raptor, but you get much more power and a better-looking and more advanced interior. However, there is a chance the next Raptor could make up for all that.

There really aren’t any direct full-size truck competitors out there. Chevrolet has the Colorado ZR2 off-roader, but that’s a smaller truck. Chevy’s full-size Silverado lineup offers the Trail Boss model, and GMC has the Sierra AT4, but those off-road-themed trucks can’t be compared to the TRX and Raptor. The same goes for the Toyota Tundra TRD Pro and Nissan Titian Pro-4X (both regular and XD). The TRX and Raptor are simply in a league of their own.

Readers sound off on the George Floyd protests – New York...