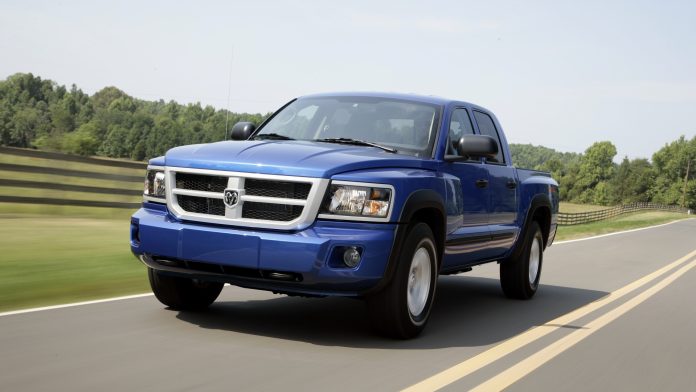 Rumors of an all-new mid-size Ram truck have been swirling for a while now and if a recent trademark filing by Fiat Chrysler holds any significance, the upcoming pickup might revert to its now-classic name: Dakota.

Late last month, Ram parent-company FCA filed a trademark application with the U.S. Patent and Trademark Office for “Dakota” as it relates to “Parts for vehicles, namely, automotive exterior decorative trim.” For those with even a cursory knowledge of pickup trucks or America itself, the mere mention of Dakota has likely already triggered a bunch of nostalgia. In case you need a crash-course, though, the Dodge Dakota was a mid-size pickup produced for three generations from 1987 to 2011, discontinued around the same time the Ford Ranger also began its hiatus.

But as of 2019, the Ford Ranger is back and it looks like Fiat Chrysler isn’t planning on letting it (and the Chevy Colorado and Toyota Tacoma) have all the mid-size fun. Sure, the Jeep Gladiator is a thing now and is technically a mid-size pickup but it doesn’t really play in the exact same ballpark as those other trucks. It only comes as a four-door, for starters, and is built more for the trail and Mojave desert rather than the construction site.

FCA boss Mike Manley once said on an earnings call last year that the company’s lack of a true midsize truck is a “clear hole in our portfolio.” Then, in February, a truck that looked a lot like a mid-size Ram was spied along with what could be a Hellcat-powered TRX, adding more weight to these rumors.

It’s hard to say what platform would underpin the potential pickup, though it wouldn’t be a surprise to see the Ram 1500’s 3.6-liter V6 make an appearance. Hybrid power is also likely given FCA’s contemporary eTorque system that can be found on the Ram half-ton truck and the Jeep Wrangler.

When The Drive reached out to FCA, a company spokesperson refused to comment.

Got a tip? Send us a note: tips@thedrive.com