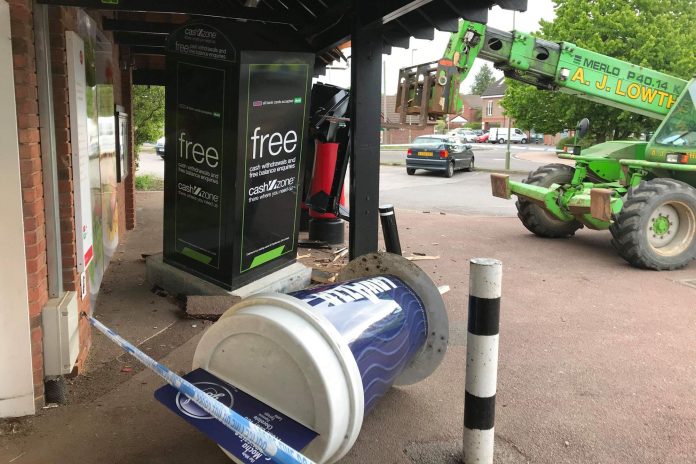 A telehandler was used to rip out the cash point at The Co-operative store in Clanfield at 2.45am today.

Police said the ATM was smashed out of the ground before being abandoned by the gang, who dumped the telehandler and fled in two cars.

The raid was the second of its kind at the village shop and has sent shock waves through the Clanfield community.

A gang of thieves used a vehicle to rip out an ATM cash machine from the ground during the latest raid on the Co-operative in Clanfield. It’s the second raid in almost two years Copyright: JPIMedia Resell

He said: ‘It’s despicable.This is the second time the store has been targeted in the space of two or three years.

‘This is most unfair and distressing for the staff at the Co-operative, who have been doing wonderful work to keep things going in the Covid-19 pandemic.

A gang of thieves used a vehicle to rip out an ATM cash machine from the ground during the latest raid on the Co-operative in Clanfield. Copyright: Other 3rd Party

‘It’s unacceptable that the staff of the Co-operative to be in any way under threat at any time.’

Clanfield’s district councillor Ken Moon said the raid could have a devastating impact on the village’s elderly community.

‘I’m absolutely horrified by what’s happened. This sort of facility, for a village like Clanfield, is so critical,’ he said.

‘This will have a significant impact on the village, particularly on the elderly residents, who rely on the store to buy their daily goods.’

Thieves used a forklift truck to smash through the wall of the two-storey store, causing thousands of pounds of damage.

The forklift was then set on fire and dumped outside the shop, which was closed for several days.

Speaking of the latest attack, a spokesman for Hampshire police said: ‘The building is awaiting structural engineers to look at it because of the damage caused and due to that it’s not known if anything was actually taken at this stage.’

Southern Co-operative said it was aware of the situation, with a spokeswoman claiming the store could be re-opened later today.

Those with information about the crime, or who saw anything suspicious in the area at the time of the incident, are being urged to call police on 101 quoting serial number 44200155517.

A message from the Editor

Thank you for reading this story on portsmouth.co.uk. While I have your attention, I also have an important request to make of you.

With the coronavirus lockdown having a major impact on many of our advertisers – and consequently the revenue we receive – we are more reliant than ever on you taking out a digital subscription.

Subscribe to portsmouth.co.uk and enjoy unlimited access to local news and information online and on our app. With a digital subscription, you can read more than 5 articles, see fewer ads, enjoy faster load times, and get access to exclusive newsletters and content. Visit our Subscription page now to sign up.

Our journalism costs money and we rely on advertising, print and digital revenues to help to support them. By supporting us, we are able to support you in providing trusted, fact-checked content for this website.