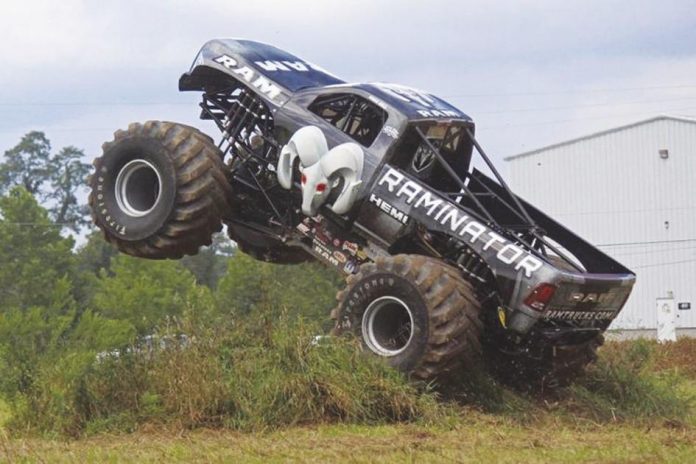 RURAL THOMASBOR — The Raminator monster truck is an impressive feat of engineering.

Tim Hall and his brother, Mark, know this quite well. Since 1986, in fact, when the brothers, who grew up in Champaign County, started their full-time racing operation.

“We take 2,000 horsepower trucks that weigh 10,000 pounds each and make them fly,” Tim said. “These trucks are part farm equipment, part drag racer and part desert racer combined into one vehicle. They look like giant toy trucks and they can perform amazing feats. The racing is very competitive and intense, and we love it. So do the millions of fans who come out every year to our events.”

Except none of those events have happened in nearly the last three months because of the coronavirus pandemic. When the Hall brothers — who employ four people full-time and a few part-time workers in addition to the duties the brothers perform with Mark as the driver and Tim as the president of Hall Brothers Racing — found out the sports world was coming to a halt, they were far away from Champaign County.

“We were in the middle of a Monster Jam tour when the virus initially broke out,” Tim said. “Part of our team was literally sitting at the Canadian border on their way to a race in Vancouver when we got word that the show was canceled.”

Since then, all events featuring the Raminator and any other monster trucks in the company’s fleet — Tim said they have eight total monster trucks they operate — have either been postponed or canceled, leaving the operation at a standstill.

For Tim, a 57-year-old Rantoul Township High School graduate and 1985 University of Illinois graduate who currently resides in Thomasboro, that has meant an adjustment he didn’t foresee coming this spring or summer.

“We’re used to going in absolute high gear all year-round and there’s never time to get everything done,” Tim said. “Suddenly, we’ve got all kinds of time on our hands. When you’re in the crowd-drawing business and crowds aren’t allowed, business as we know it comes to a complete halt.”

Needless to say, they’re eager to get back to racing. Tim said the Raminator is set to start competing again in about a month.

“Our schedule is pretty jam-packed from the Fourth of July on,” he said. “It’s getting busier every day as events that were postponed due to the virus are being rescheduled. We’ve been racing almost non-stop for the last 34 years, and we are not used to sitting at home.”

The extended time back in Thomasboro, though, has done the Hall brothers some good.

“I never realized I had so many projects that needed doing,” Tim said. “We’ve been doing deep maintenance on the race vehicles and haulers, cleaning and renovating the race shop and taking some time to relax. A couple of us have started working on vehicle restoration projects that we never seemed to have time to get to.”

Projects aside, Tim is more than ready to see his fleet of monster trucks competing and entertaining fans again. Interacting with fans is a vital part of their business.

“Monster truck fans come from all walks of life, and we enjoy talking to them all about our trucks and what we do,” Tim said. “One thing that amazes me is that no matter where we go in the United States, once people find out where we are from, there’s always someone in the crowd who tells us that they were stationed at Chanute Air Force Base or that they went to school at the University of Illinois or that they are somehow tied back to central Illinois. This is true, whether we are in California, Florida, Maine, you name it. There’s always a connection to central Illinois.”

COP TALES: A funny man and a great commander | Cop...

Deadline Detroit | Why are these Detroit leaders helping Moroun get...