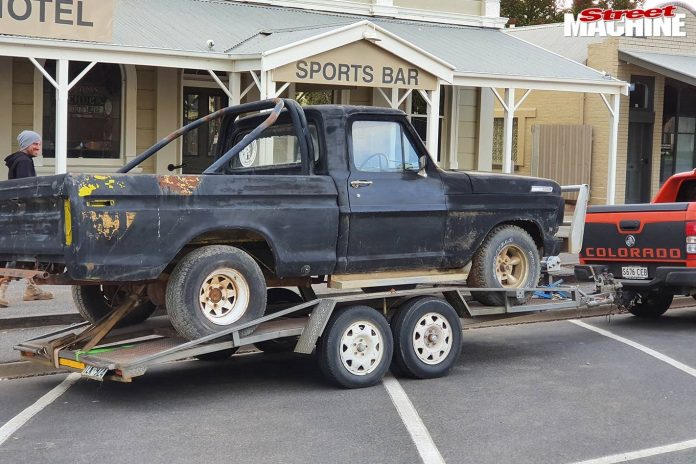 ADELAIDE lad and Drag Challenge veteran Phil Edmondson is always busy refining his monster XB coupe, but has added some F-truck goodness to the shed. “I found the F100 in Echuca,” says Phil. “It is the first of the ‘bumpside’ models, but has a ‘dentside’ tray.

It was a 240ci six-pot/four-speed deal from the factory, but had a tired 302 Clevo, C4 and nine-inch when I purchased it. I’ve got a complete driveline out of a WM Statesman and am going to fit that: 6.0-litre L98, 6L80E auto, ECU and go-pedal. 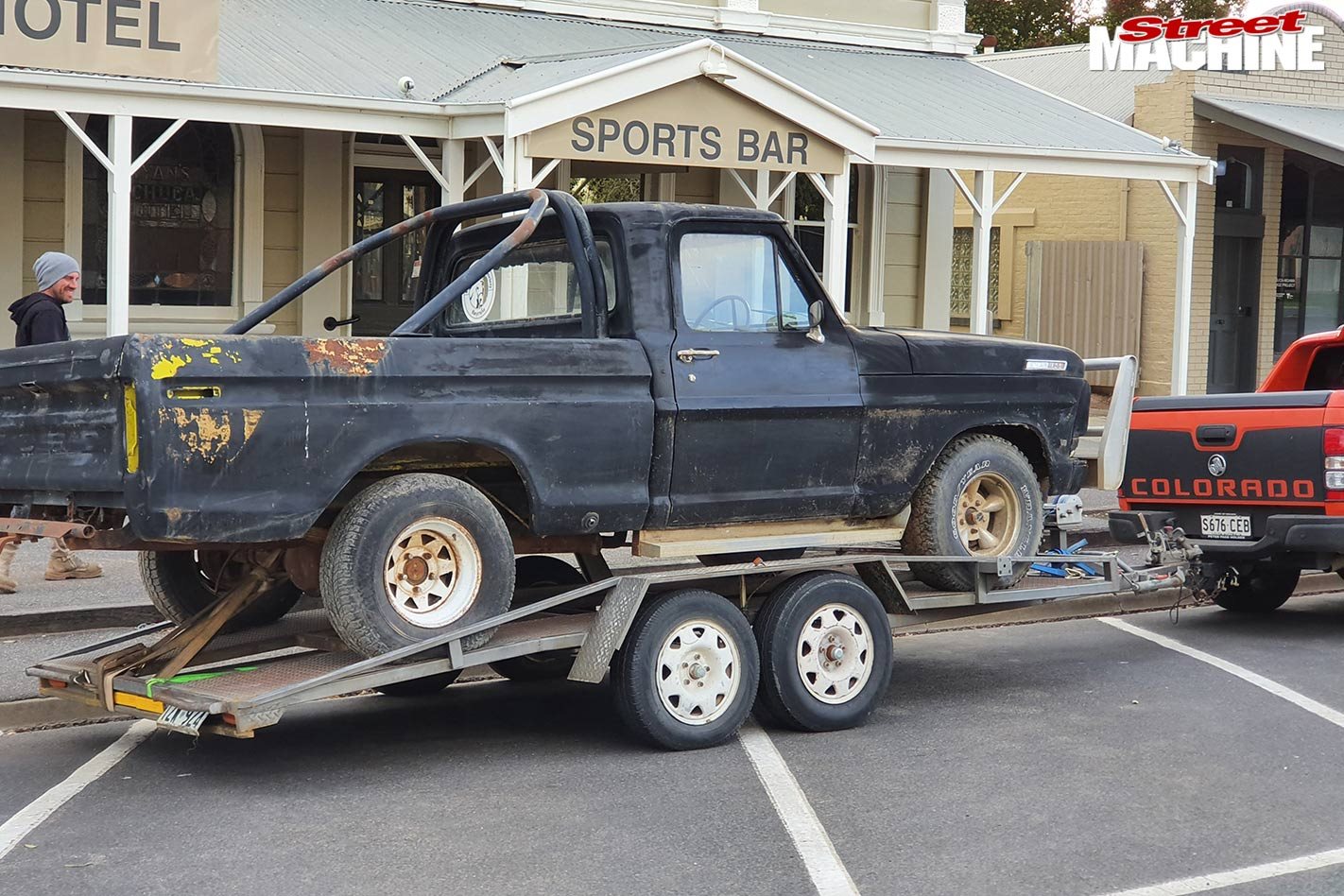 I found a bumpside tub to match the body in Bendigo – they are pretty hard to find, so I’m stoked. The cab is surprisingly good for rust – just one bad spot on the roof and a little in the floor. The usual places they blow out, like the firewall and cab corners, are all sweet. 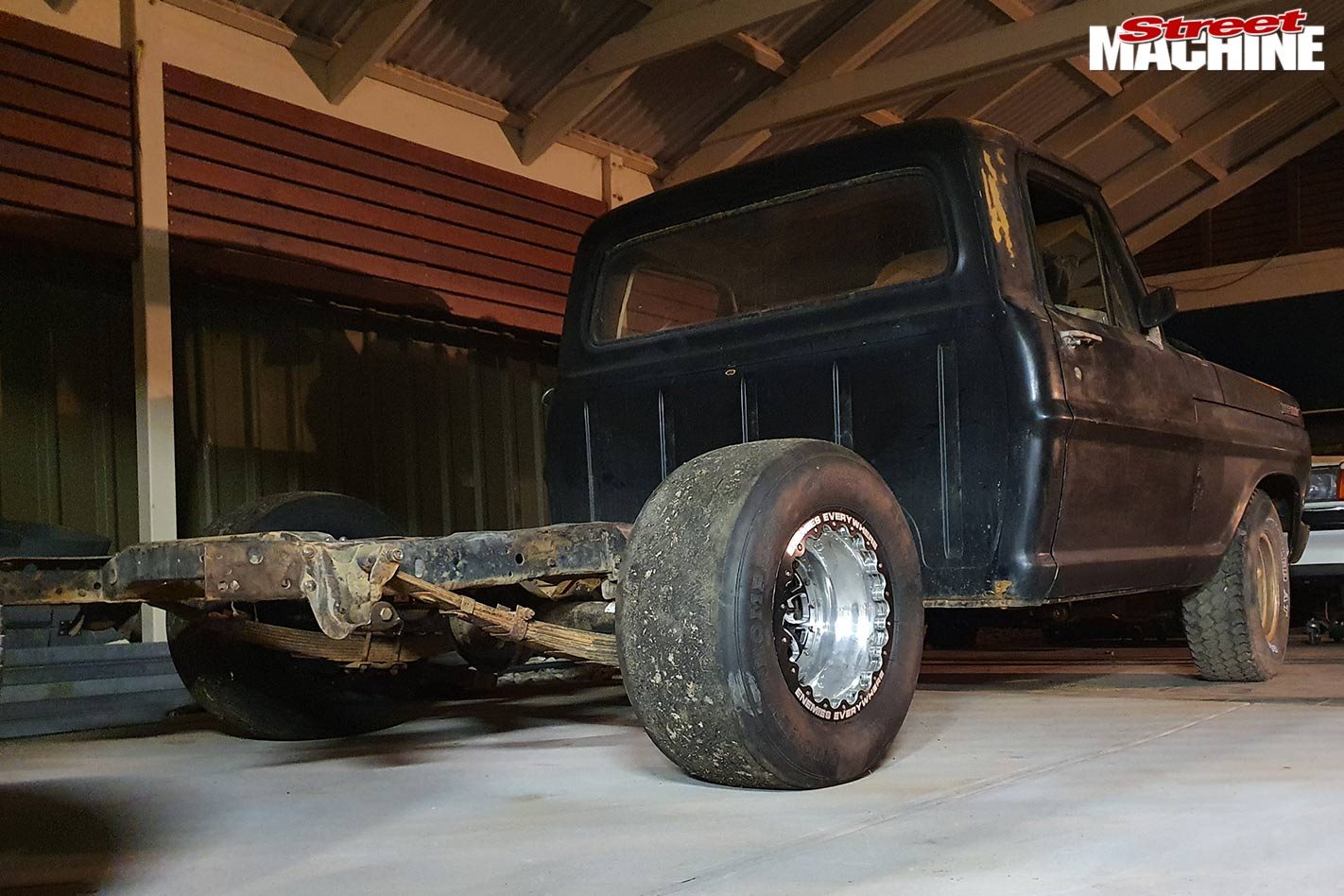 I’ve got to check with my engineer before I go ahead, but the current plan is to keep the stock chassis, notch the rear and fit a Car Guys Garage BA Falcon front end. The idea is just to build a comfortable, reliable daily. I’ll put a cam in it and it should go okay; they only weigh 1649kg in stock form. I reckon I’ll go for two-tone factory-style paint, nice and low over big rims. All subject to change of mind, of course!”

“I WANT to keep my Stout build all Toyota. It’s running a 1UZ Lexus V8 and auto, and we’ll add a HiLux diff. 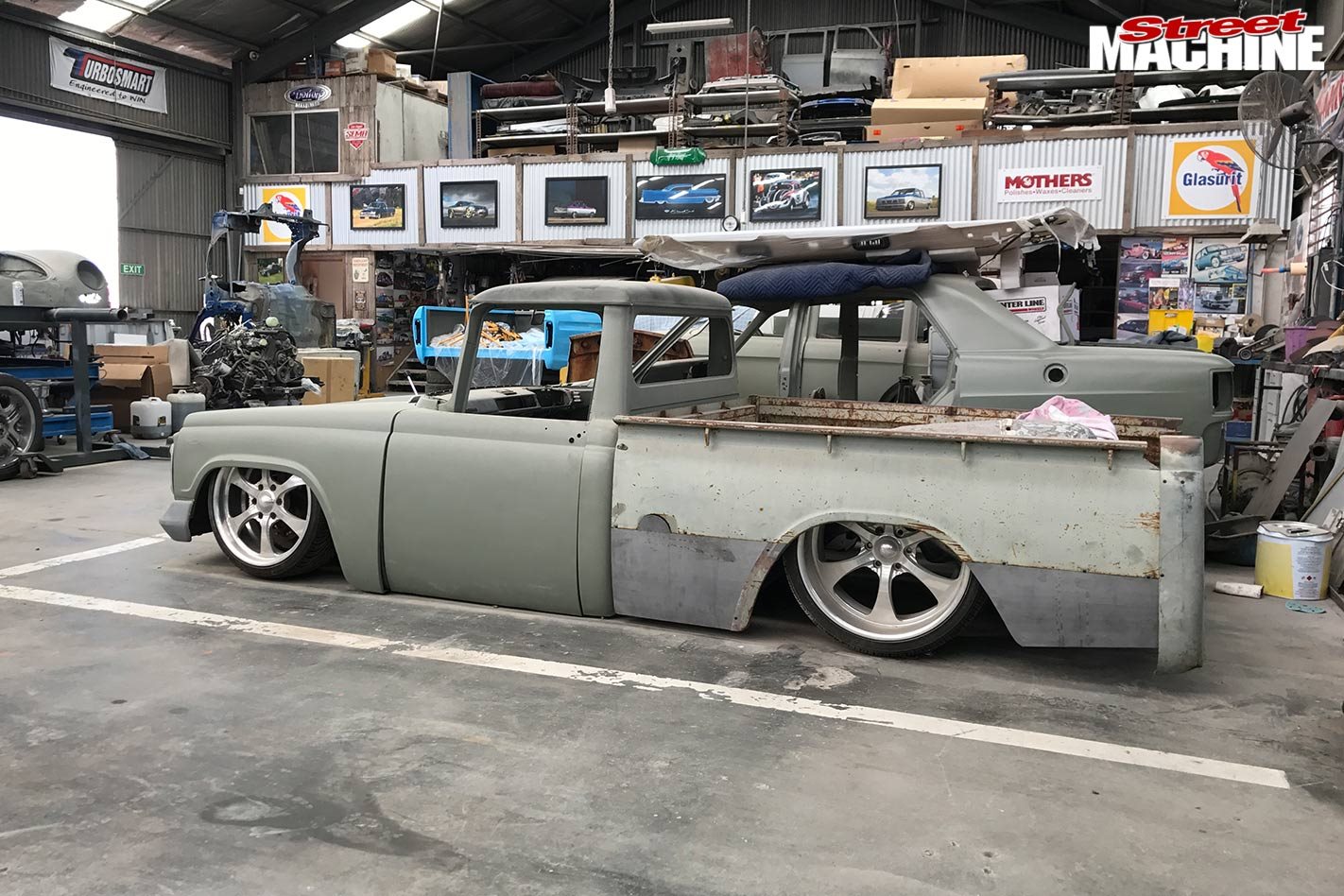 So far we have grafted ’98 HiLux front suspension into the original Stout chassis, and added custom-made rear chassis rails with a few sneaky tricks to get it to sit on the ground. There’s already around 350 hours in just the chassis with all the little details in smoothing it and making it low. 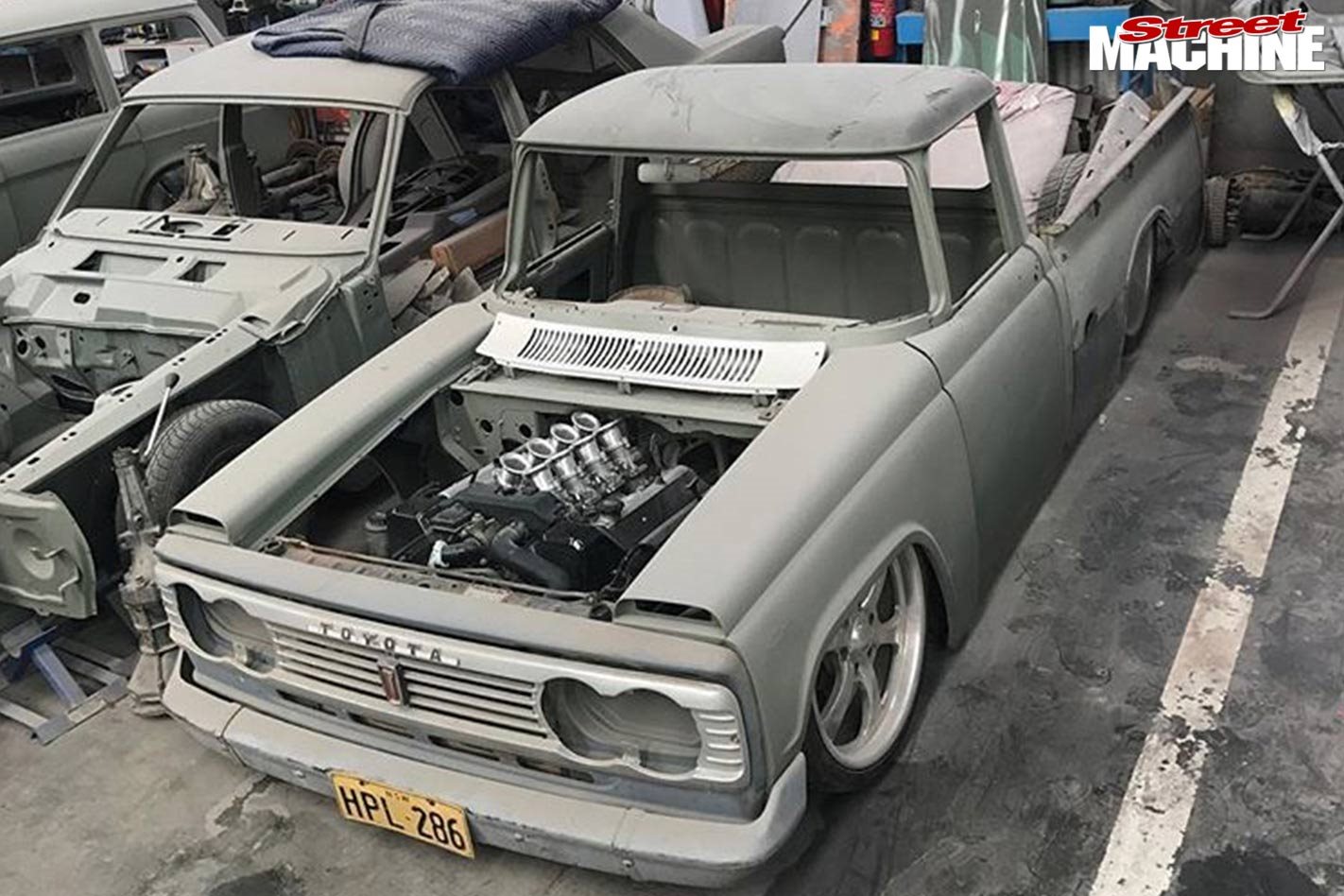 The body hasn’t had too much done to it yet, but I have bought eight other Stouts just to get the best possible panels for it – I even went to Broken Hill to get one just for the tub. So far I’ve only done the body drop – I had that all finished, but decided I’d cut the floor back out to make it better looking. It’s been a fun project so far. 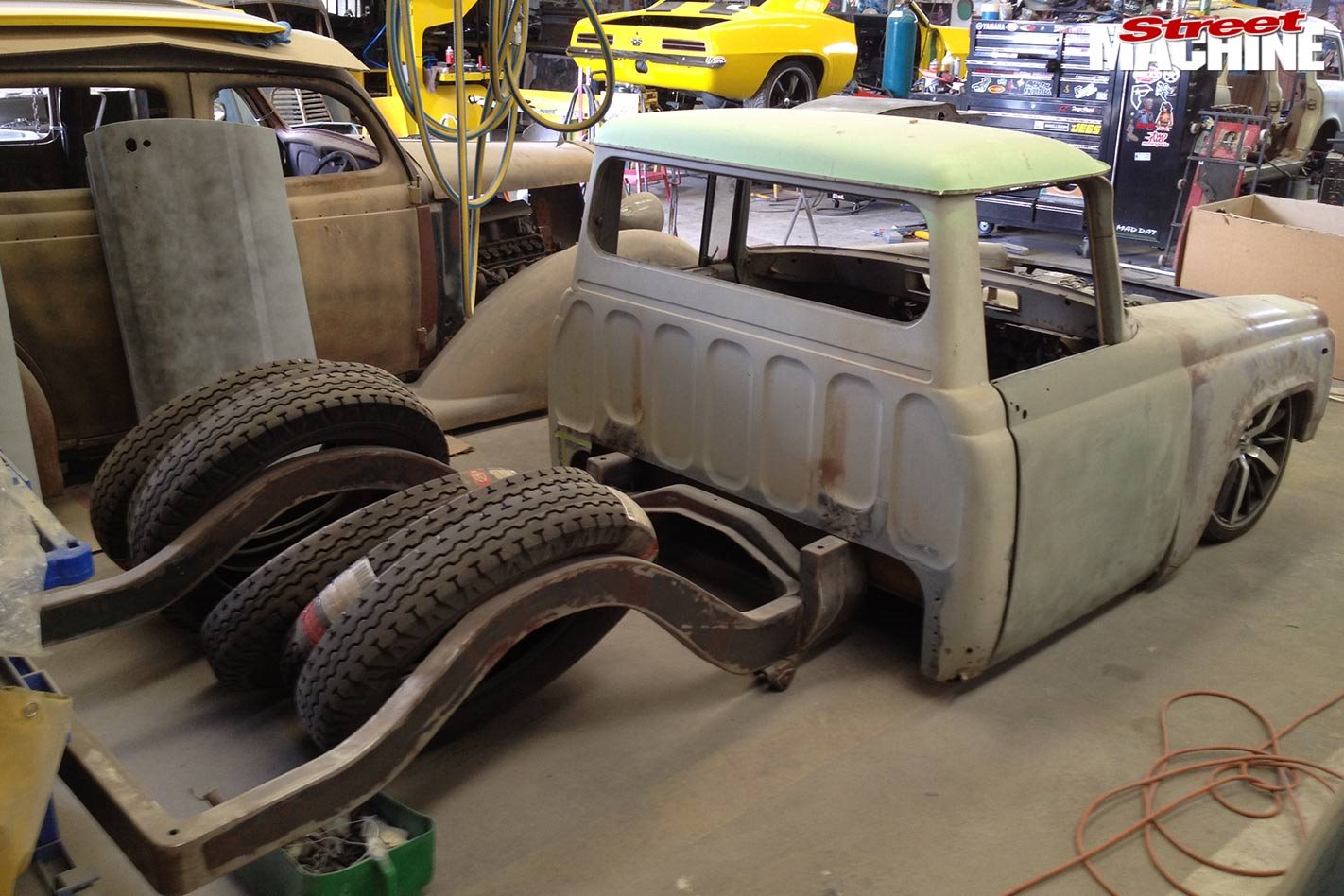 I started building it at home in my shed with my son, who was about three at the time. I then took it to work to put it on our chassis aligner to do the chassis work, which turned into a father-son project with my dad, which has been enjoyable. I parked the project for a while to concentrate on customers’ cars, but hopefully very soon I’ll get back onto the Stout, as we have some great ideas for little things on it. Big thanks go to my son Cruz, my dad John, my brother-in-law Andrew Lynch and my good friend Norm Gray for all their help so far.” 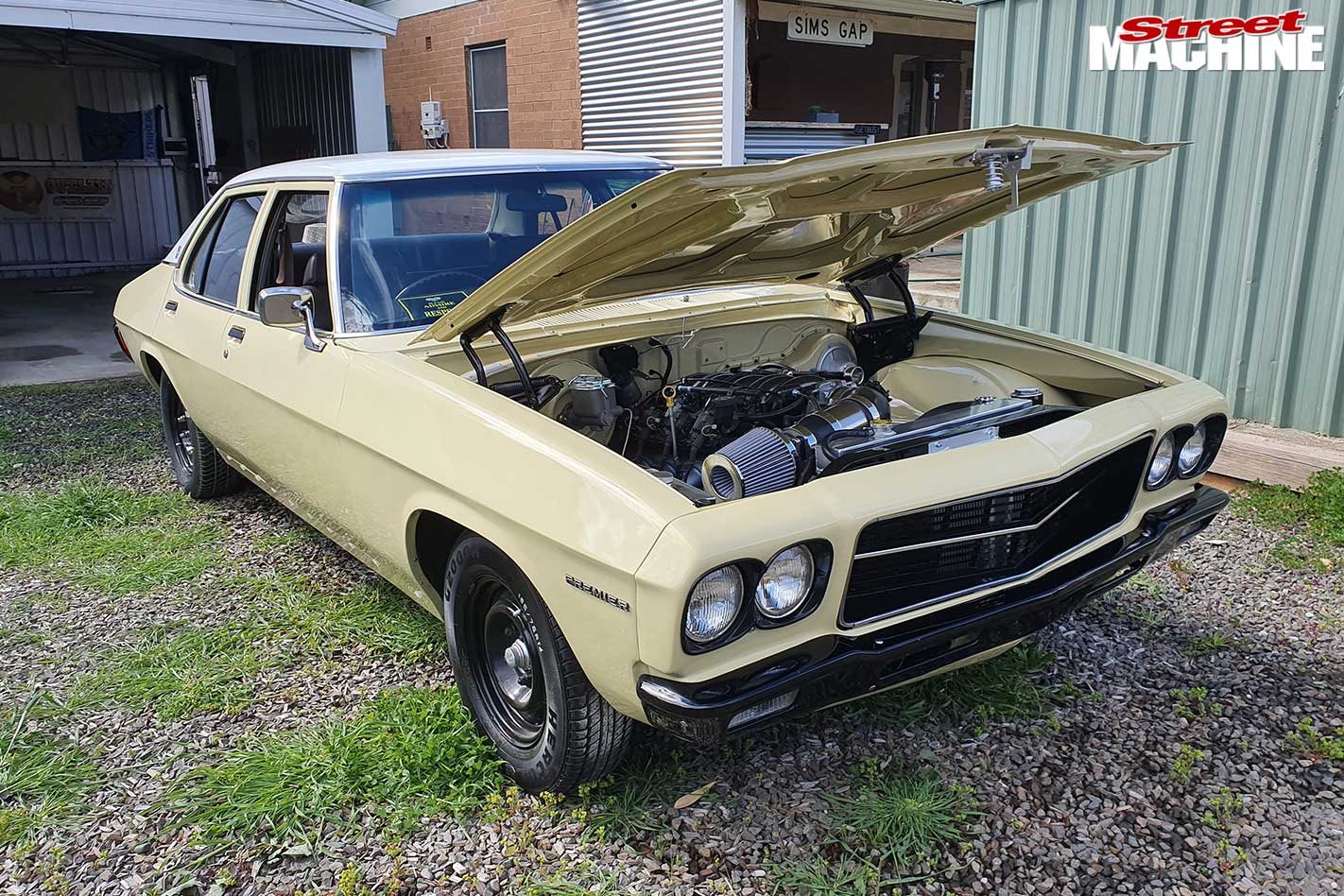 “I PURCHASED my HQ four-and-a-half years ago as a shell. I stripped and repainted it in 2K Covert Beige with a Glacier White roof, which are the original colours. I’ve also redone the interior in the original Antique Brown and kept the bench seats. 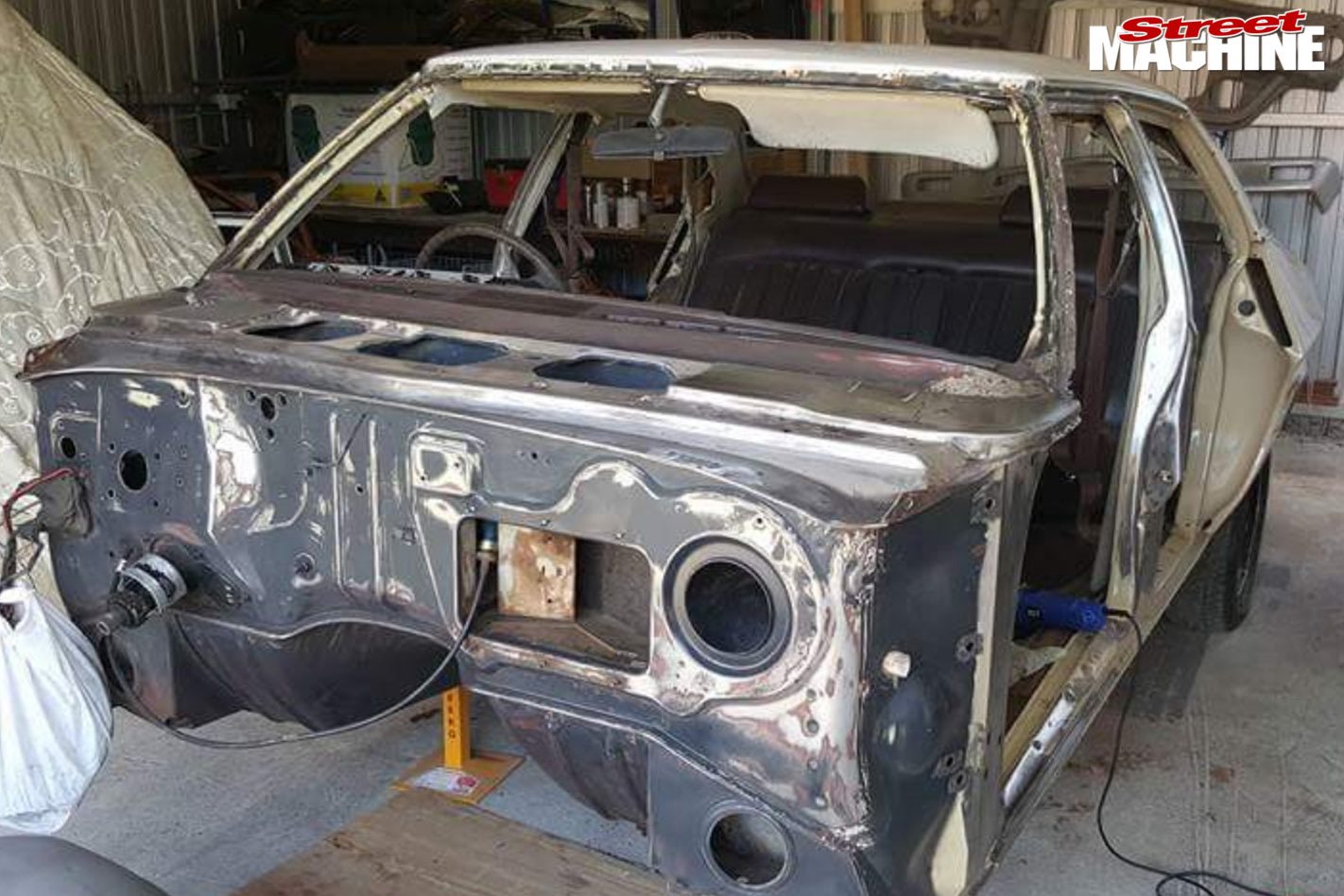 It was originally fitted with a 202, Trimatic and 2.60:1 banjo rear end, but I am giving it an LS1 conversion. I used $11,000 from the sale of my previous HQ ute build to fund the big components I needed, including the LS (and a conversion kit from Castlemaine Rod Shop), a rebuilt TH400 trans with standard converter and a nine-inch diff with 3.55:1 gears, as well as all the paint and sanding gear. 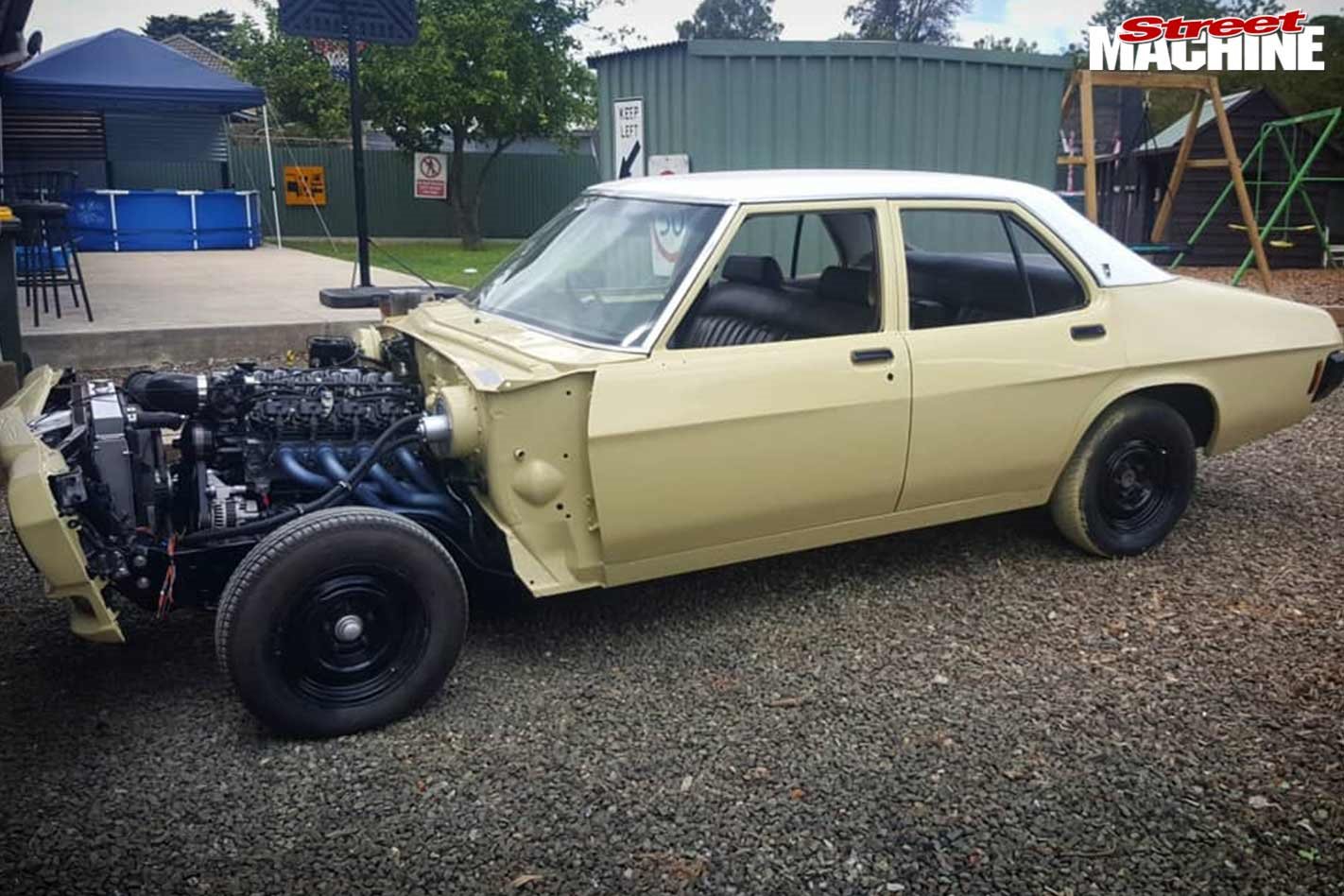 I am working on a budget of $50 per week to build the rest. It’s a long process, with many hours spent in the shed building it mainly with hand tools and a welder, helped by some close mates. It should be ready for a roadworthy in a few months. 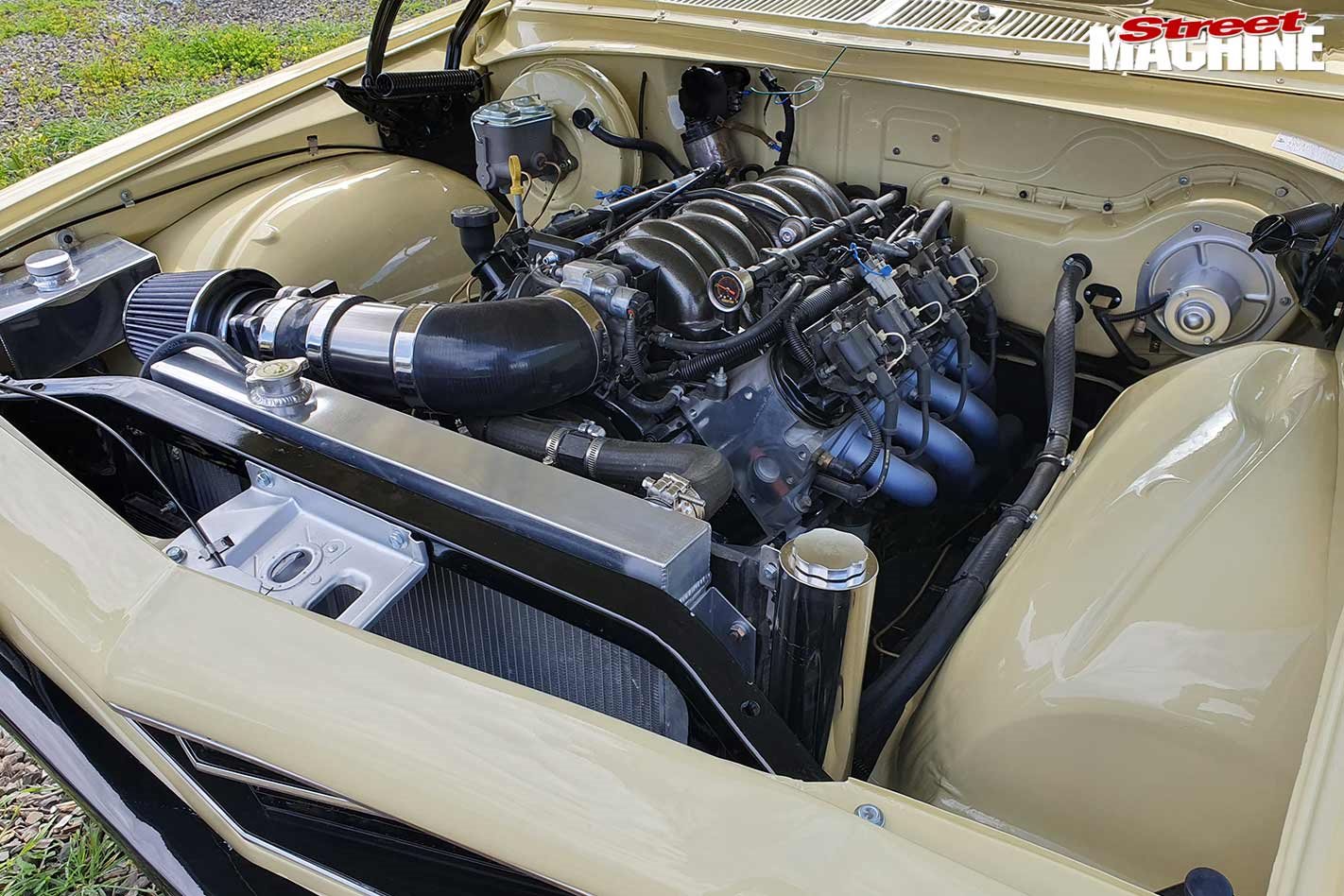 I bought it so I can take the kids for an ice cream, which I couldn’t do in the ute.” 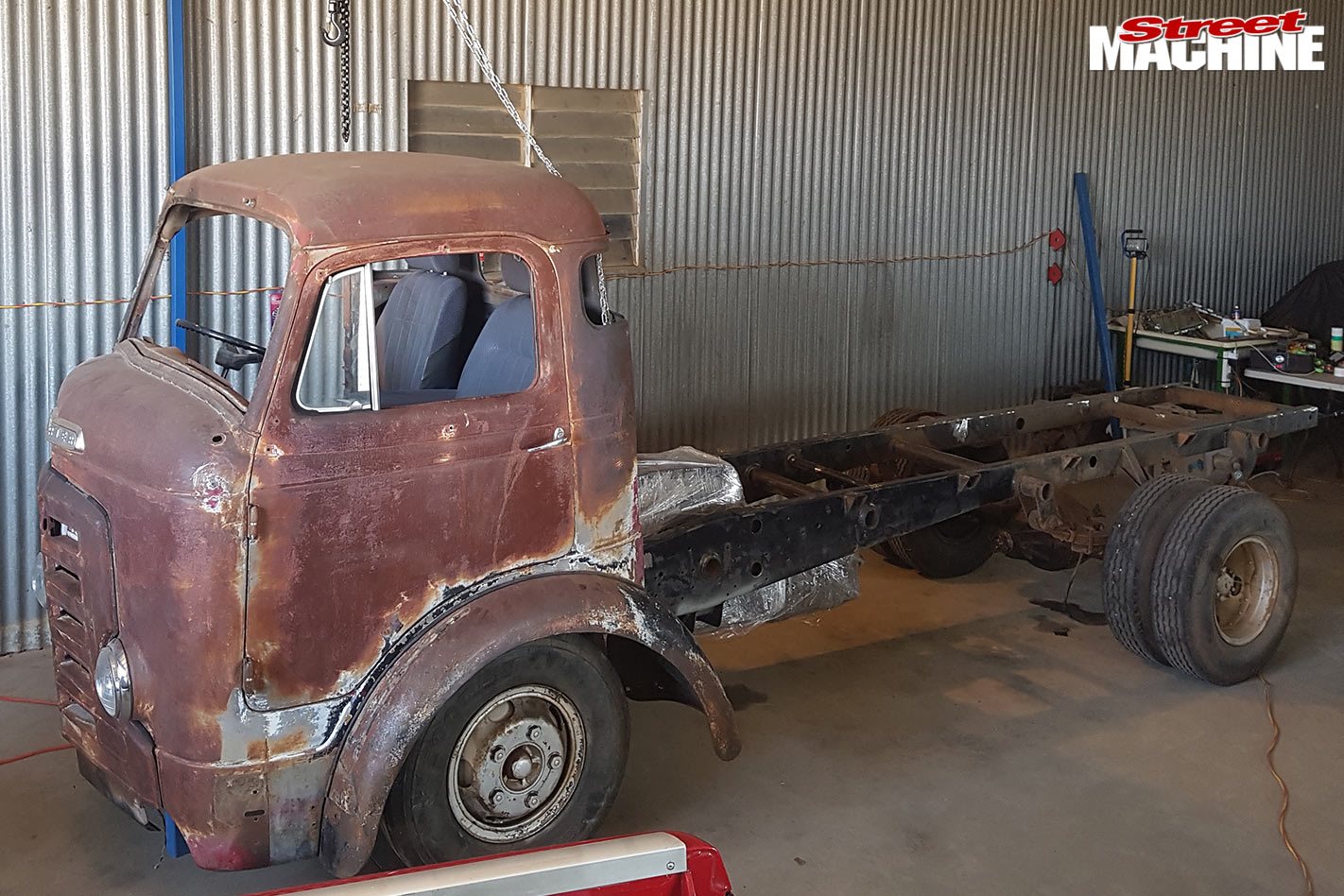 “THE cab is a ’56 Karrier COE bought out of Bathurst, and I’ve sat it on a Toyota Dyna chassis. I had the cab floor removed, channelled it over the chassis and made an all-new floor. 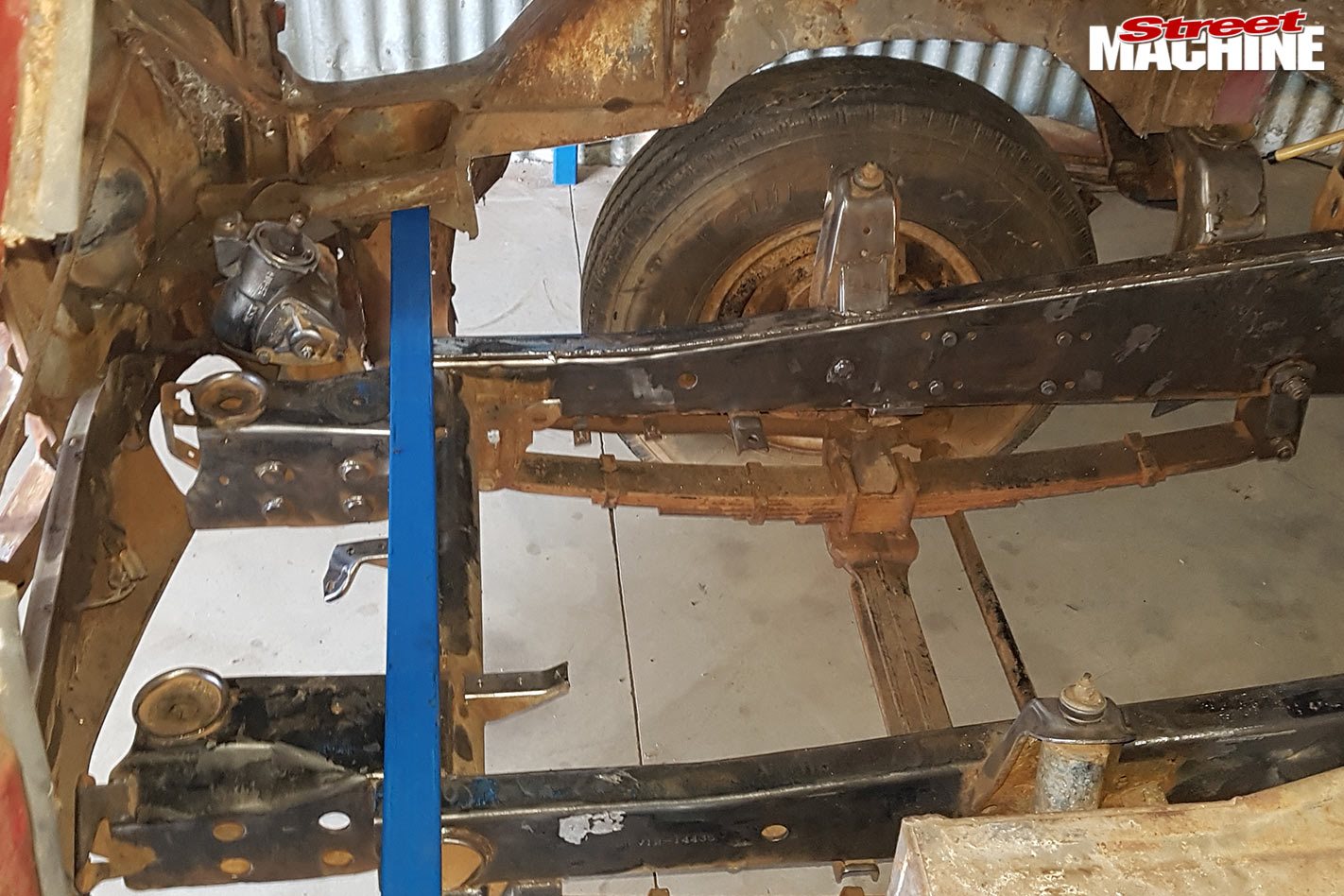 The front guards have been sectioned four inches to suit the Dyna wheel track. Power comes from an FG Barra, mounted using BA legs and rubber mounts with custom mounting brackets. The fly-by-wire accelerator pedal and factory shifter are also being used, as well as an XE bench seat. 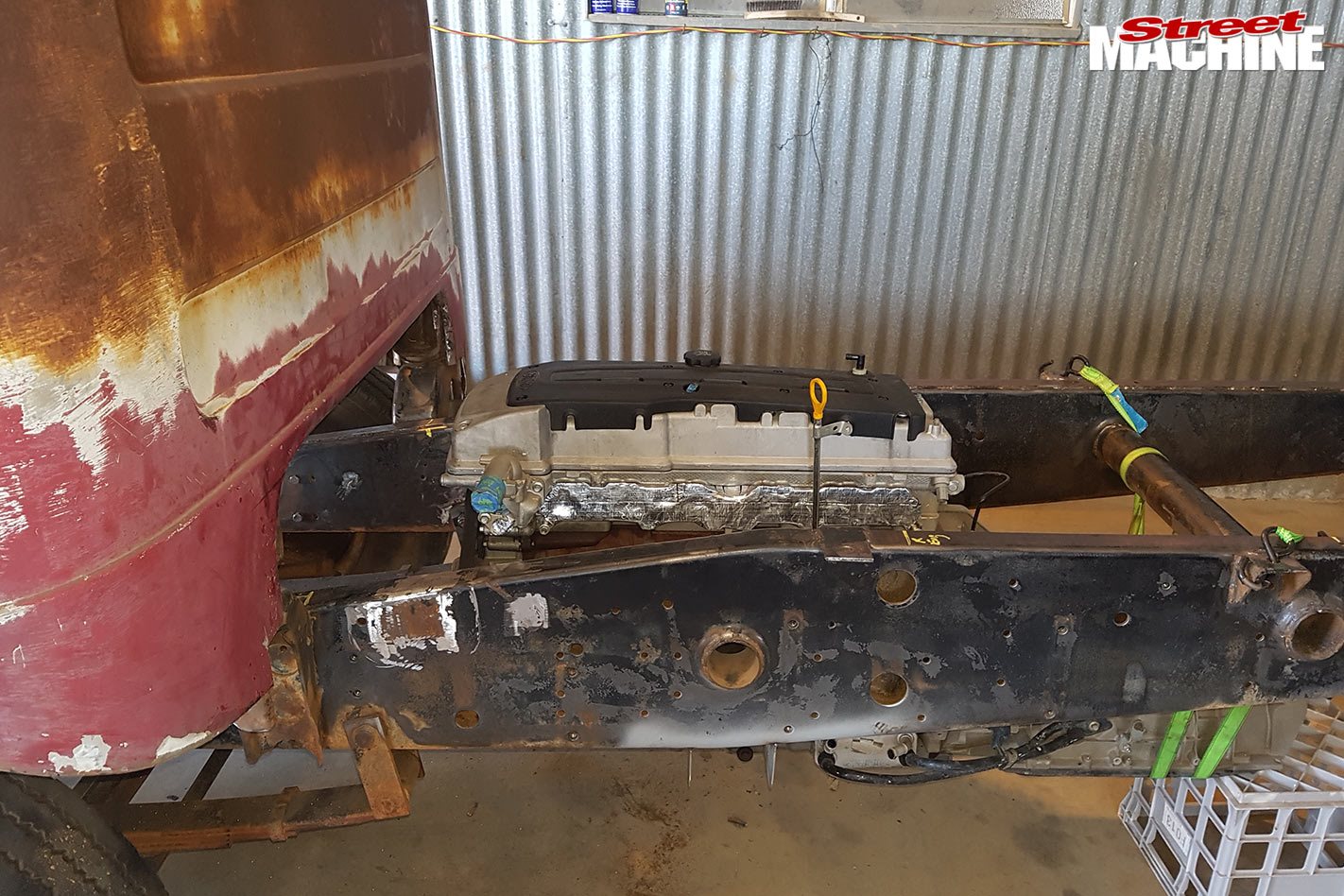 I have now moved to Rockhampton, and will finish the build in time for Summernats 2021, when I will hopefully use it to haul my hot rod down to Canberra.”

“I BOUGHT my Mazda wagon off a mate, as I wanted to build a tough wagon to take to events like Powercruise and Summernats. 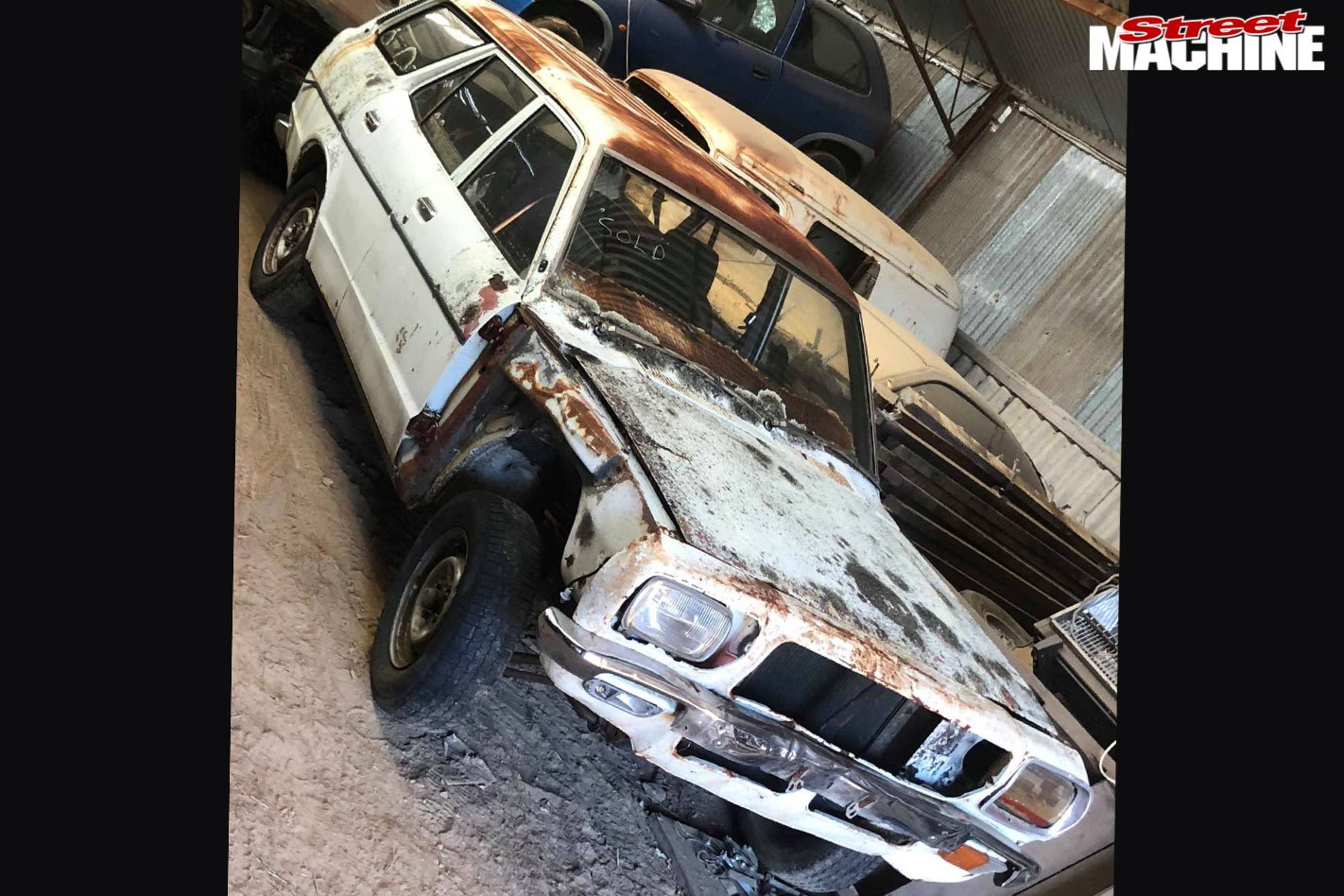 I have a collection of cars including Mazda rotaries, an XY and an LX sedan. I was looking at upgrading a lot of parts on these cars and I had a lot of spares from past builds, so I thought, why not throw this together with those parts instead of trying to sell them off? 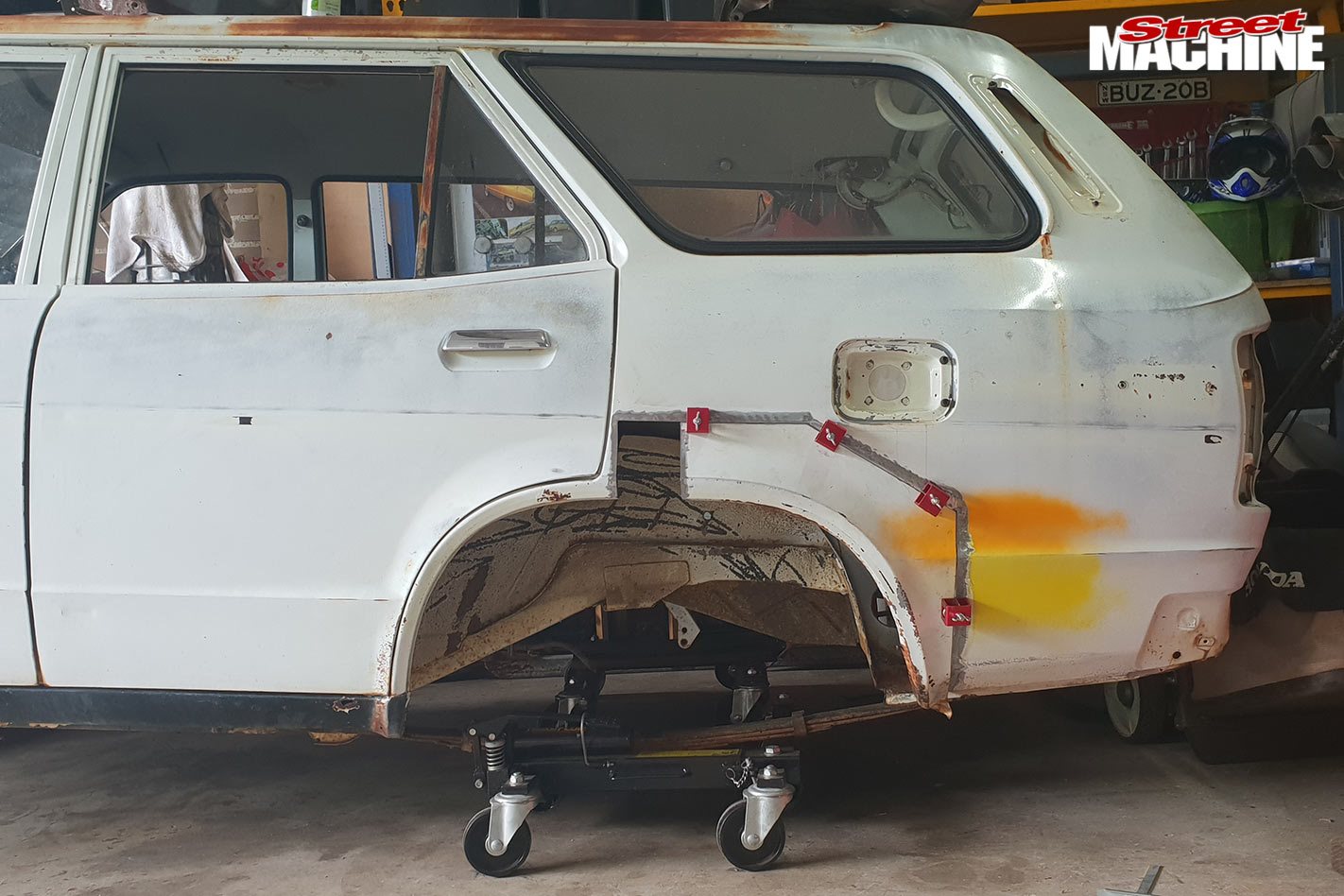 I’m giving the wagon a Barra conversion, as no one has done one before, and the Mazda weighs under one tonne so it’s much lighter than a Falcon. I found an FG taxi with a straight gas green-top motor, after watching Scotty on Carnage and following his ups and downs with the Barra. Apart from cutting the firewall back for weight balance, sump clearance and to make room for the radiator and cooler, the engine clears the steering and crossmember without touching the sump. 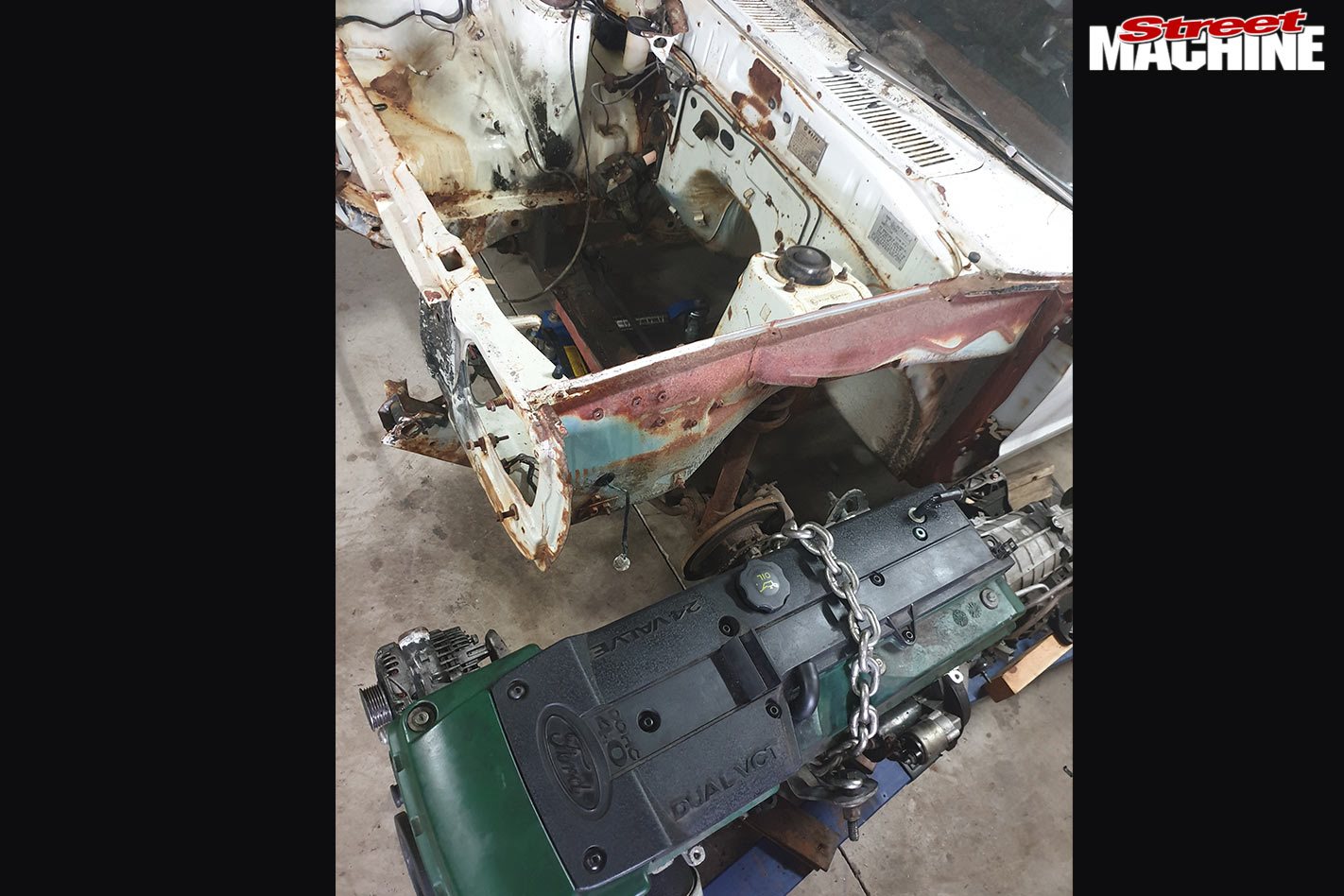 I’m in the process of fitting Tuff Mounts Barra mounts and finishing up the firewall recess, and then I’ll tub the rear. It’s getting built in the garage in my spare time between other projects. The plan is to end up with a cheap, fun car with 400-500hp after being turbocharged and enough torque to keep it spinning tyres and spinning heads.”