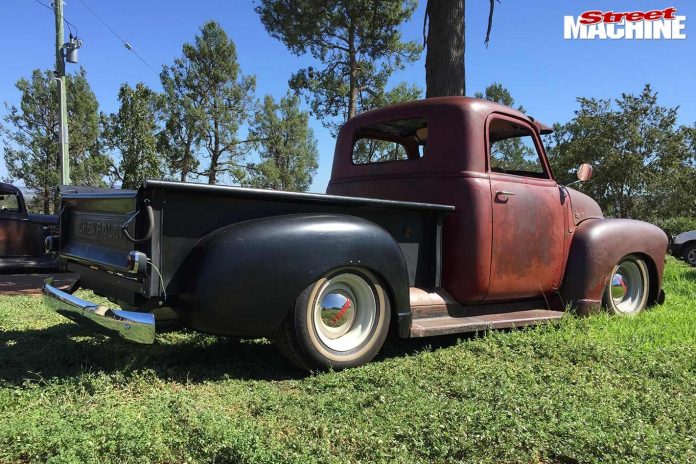 In part one of our readers’ COVID-19 isolation builds, we showed some of the project cars our readers are working on during lockdown. Here’s seven more awesome projects in the build…

“I’VE had my FJ since 2004 and have been slowly building it over the years in between running my own business and a growing family. We thought we’d lost her in the recent bushfires, as our property was engulfed in flames.

My neighbour Eddie and I ran back once the fire had passed and we managed to put out all the spot fires and save the house and garage! So I’ve called the FJ ‘Sooty’, as she was covered in ashes. I’ve done most of the work myself: rust repairs, chassis work, paint and mechanicals. I’m building it as an old 70s street machine, running a 283 small-block Chev, T400 trans and nine-inch. 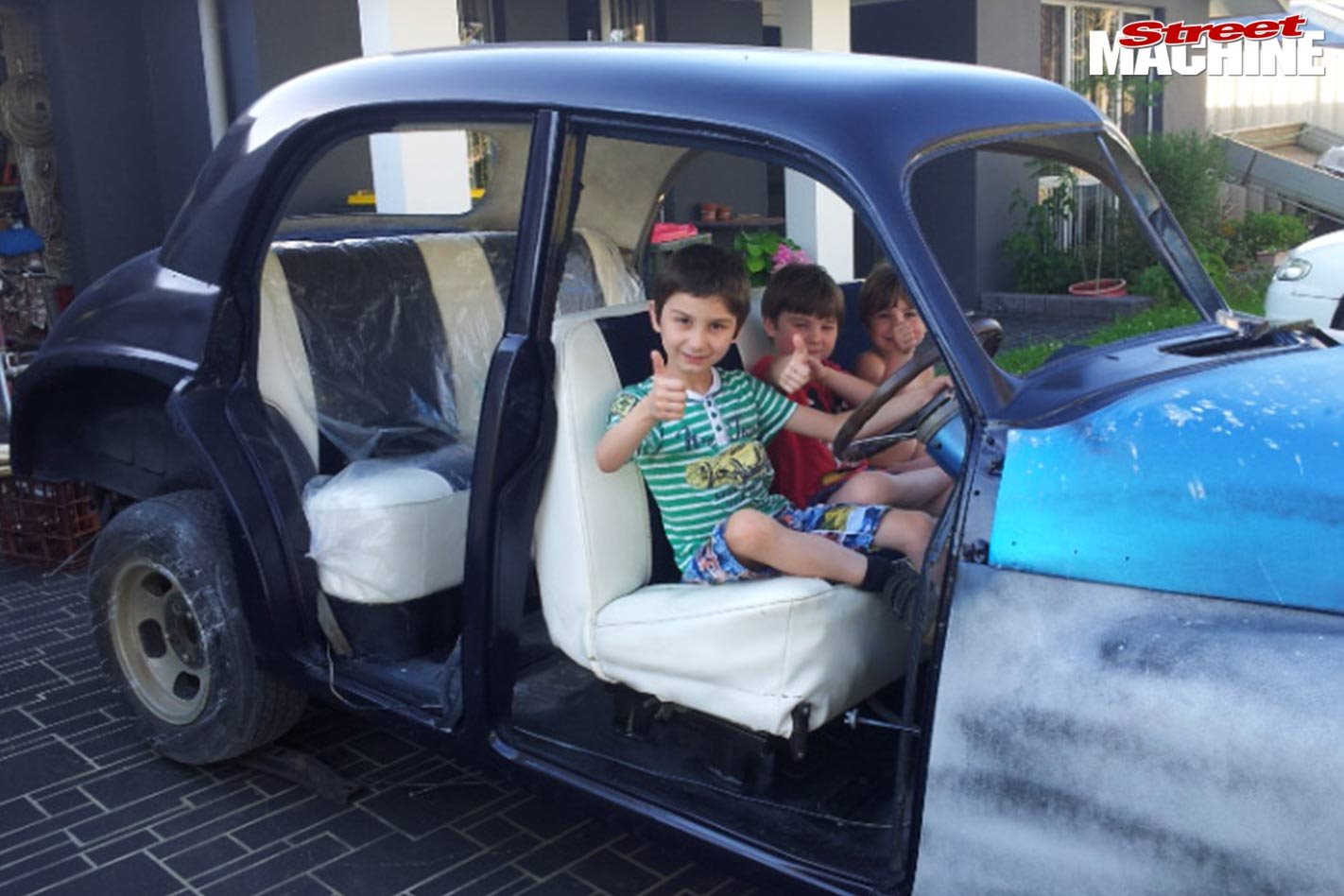 I want it to look like the Chev was a factory option. Body mods include shaved handles and fuel filler, a fluted bonnet and recessed firewall. My old man Joe and his mate Allan did the chromework. I’m hoping to have it completed in time for the FX-FJ Nationals at the end of this this year at Cooma. 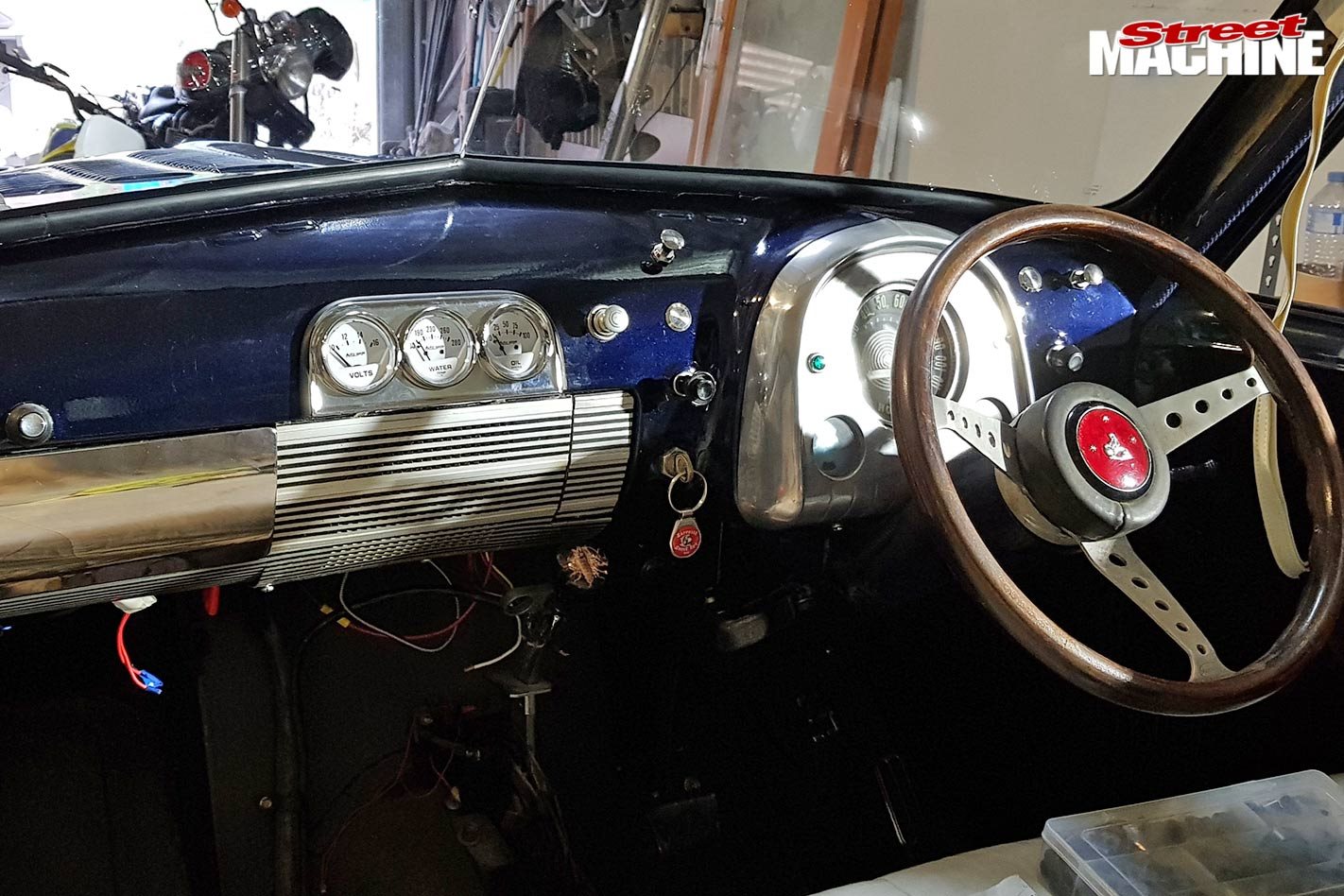 Thanks to Dave Ryan (Rare Spares), Nathan (Glass 4 Classics), Engine Master Australia, CRS, Rod Hadfield, Silver Needle Motor Trimming, and my missus Jojo for carrying the kids and shopping in the rain while the FJ was nice and dry in the garage all these years!”

Tech tips: Sorting our the finishing touches on your project car 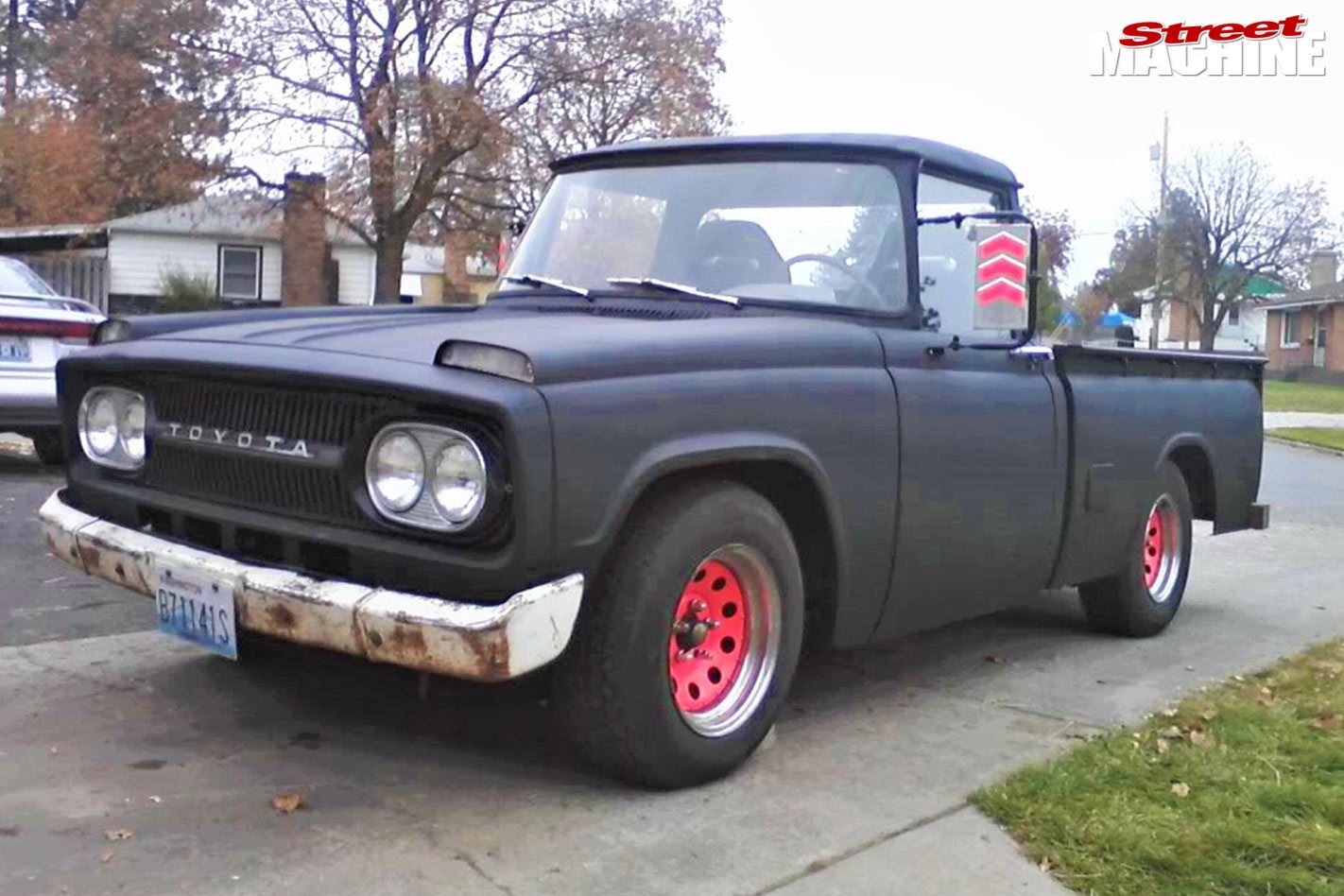 “HERE in Washington State, there’s no real scene for Toyota Stouts of this vintage; I think the import numbers for ’64-’69 Stouts to the USA was less than 5000 units. But I stumbled across a pair of Stouts in an alley and ended up striking the deal to get them home. 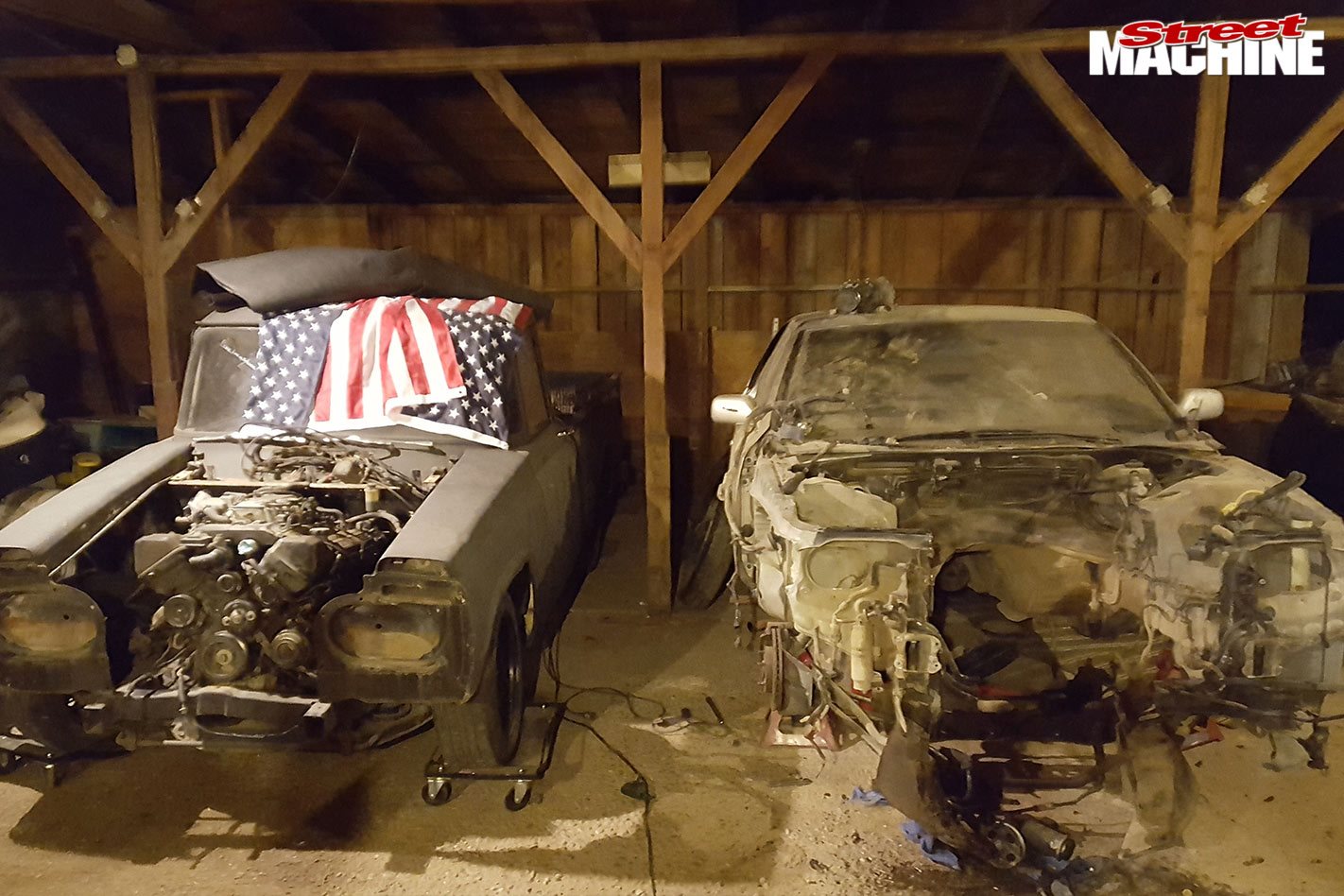 The first big undertaking was priming the whole thing to seal the metal and prevent further rust. Then I found someone parting out a 1978 2WD HiLux, so I bought the front spindles/disc brakes, 20R engine, five-speed gearbox and Toyota eight-inch rear axle. I swapped all this in to make it a little better to drive. 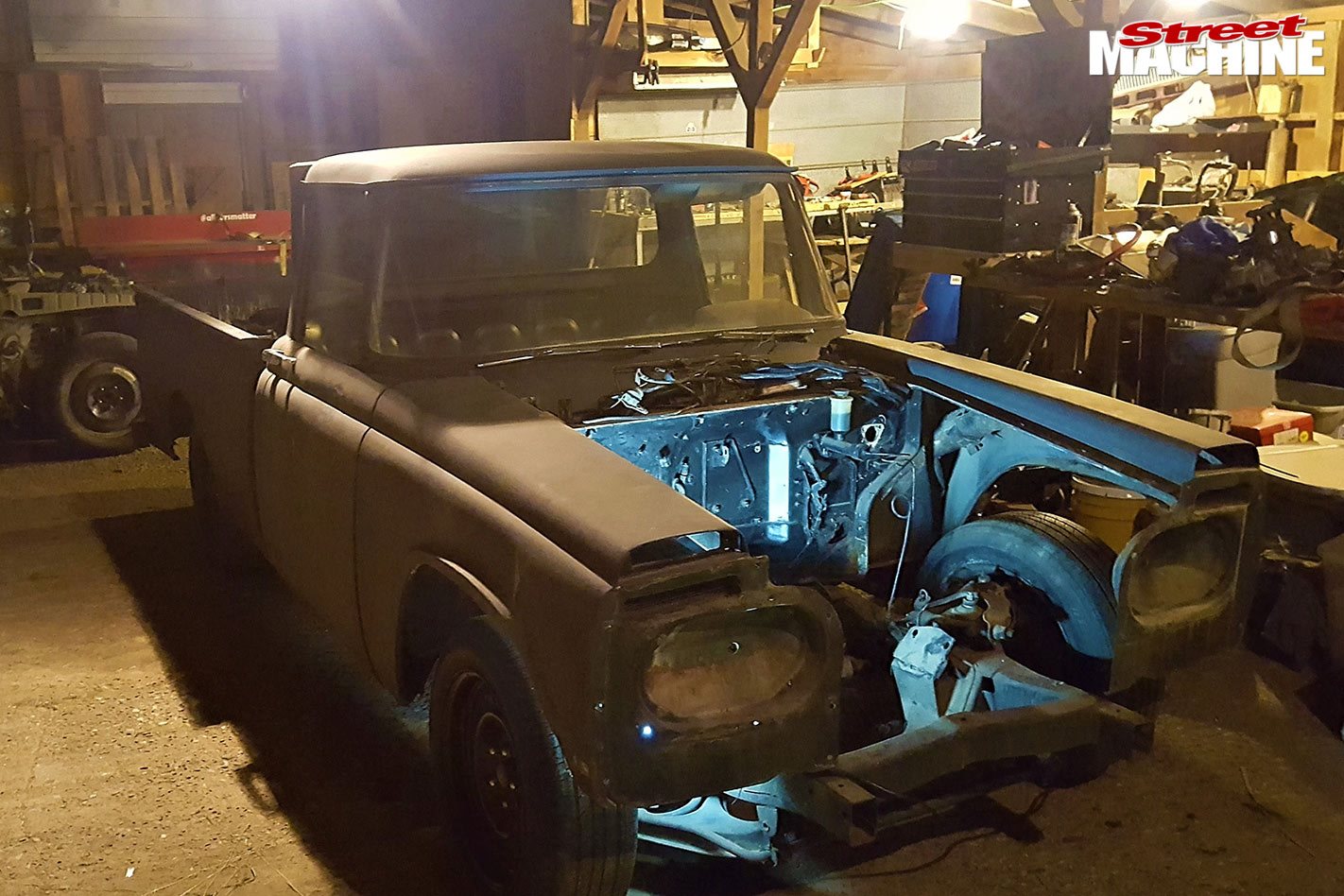 Eventually I took the motor/trans out for a 1975 Celica build, and that’s when the Stout began sitting. Over the years I refused probably 20 offers to buy it. Finally, weeks after moving to our new home, the Stout went into the garage and under the knife. I had found a 1991 Lexus LS400; having been a Lexus tech for seven years, I knew its 1UZ V8 would be a great heart for the Stout. 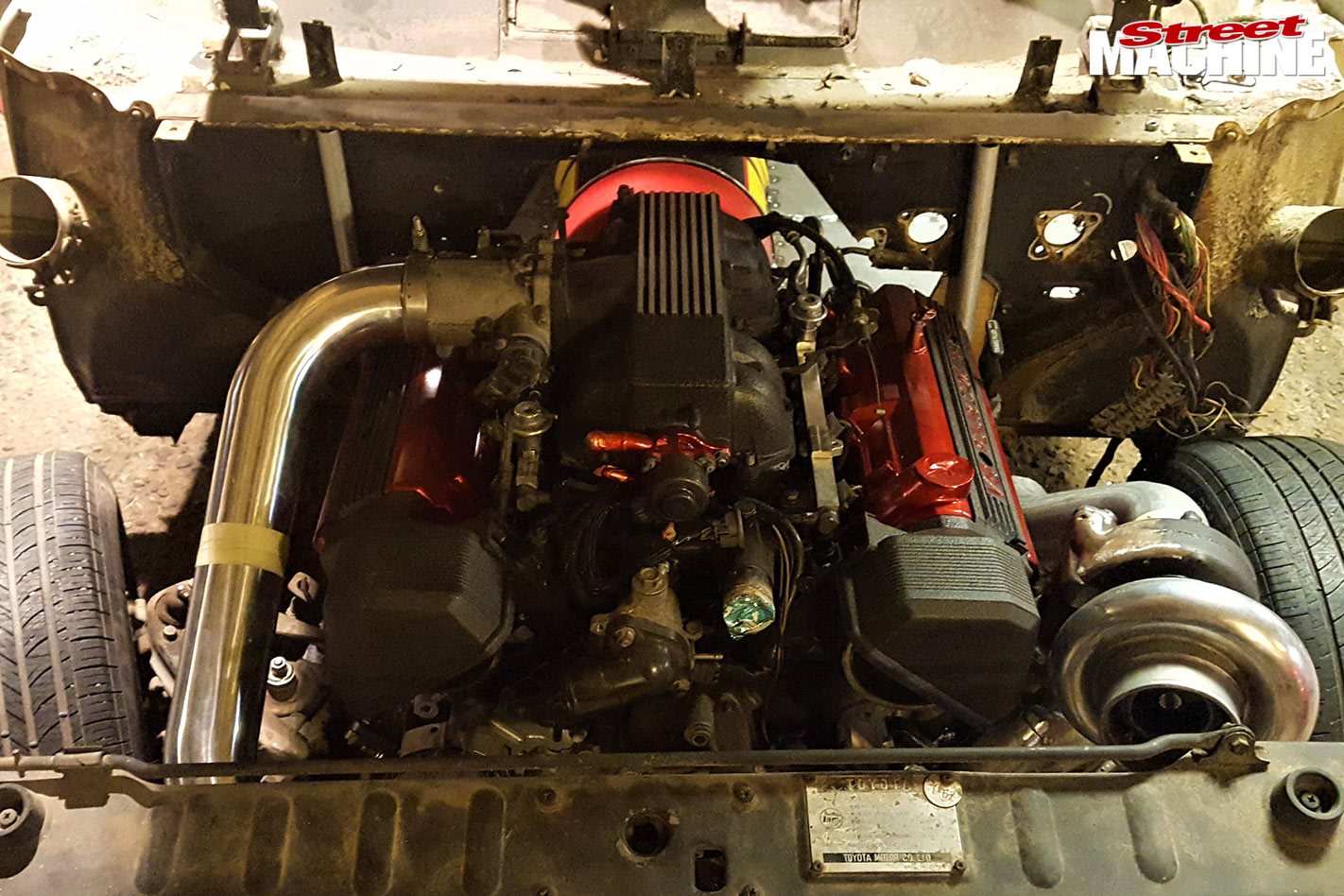 So that along with the Lexus’s A340 trans and disc brakes will be used. The truck will have a restomod/daily driver track-truck feel: modern drivetrain, brakes and rack-and-pinion steering in a classic truck packaging. And a big Holset turbo should help move it right along!”

Tech tips: Why your project car needs a well-engineered chassis 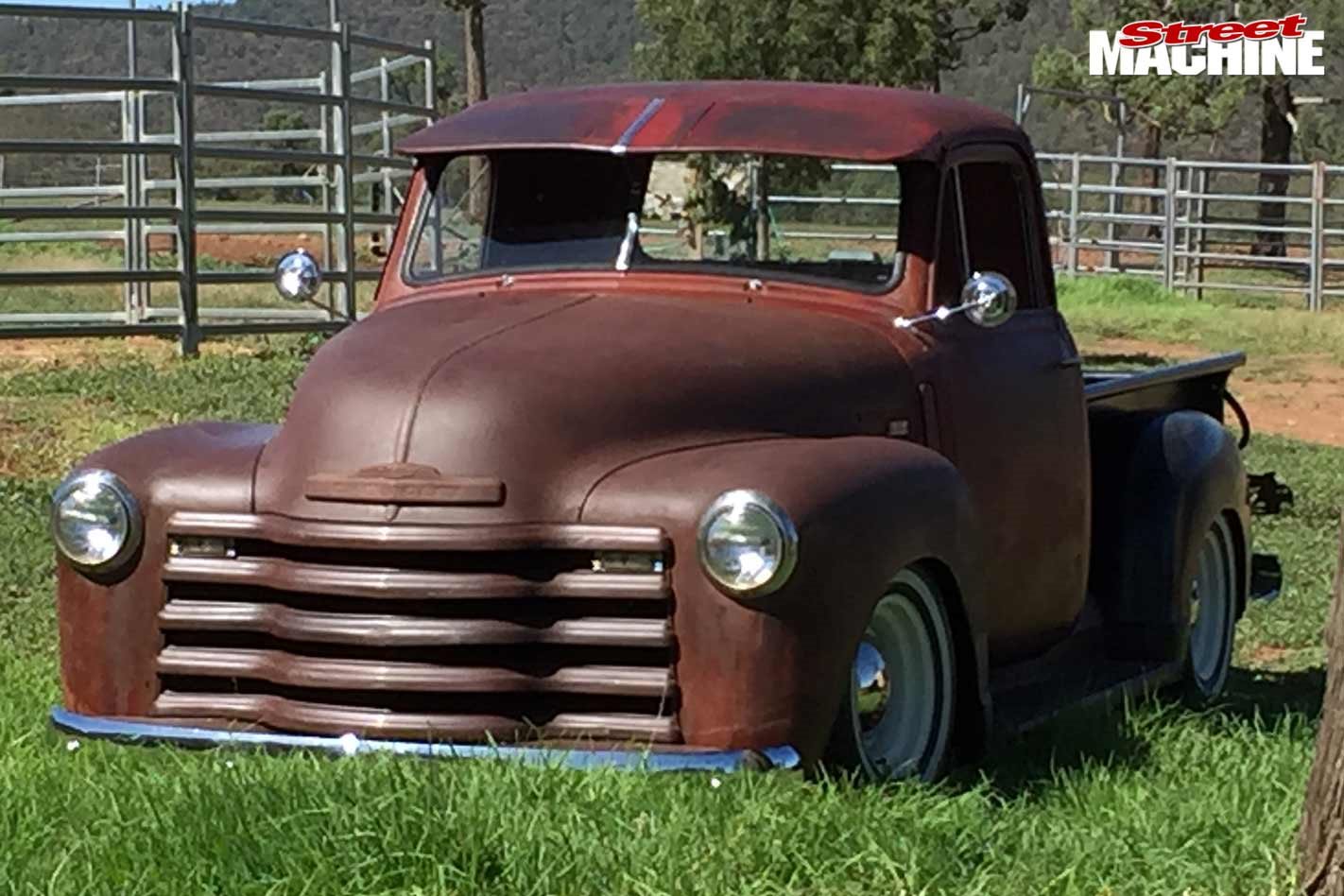 “I BOUGHT the truck off a farm not far from home; the farmer was the original owner from new. It was a big dual-wheel truck that I cut down into a pick-up. 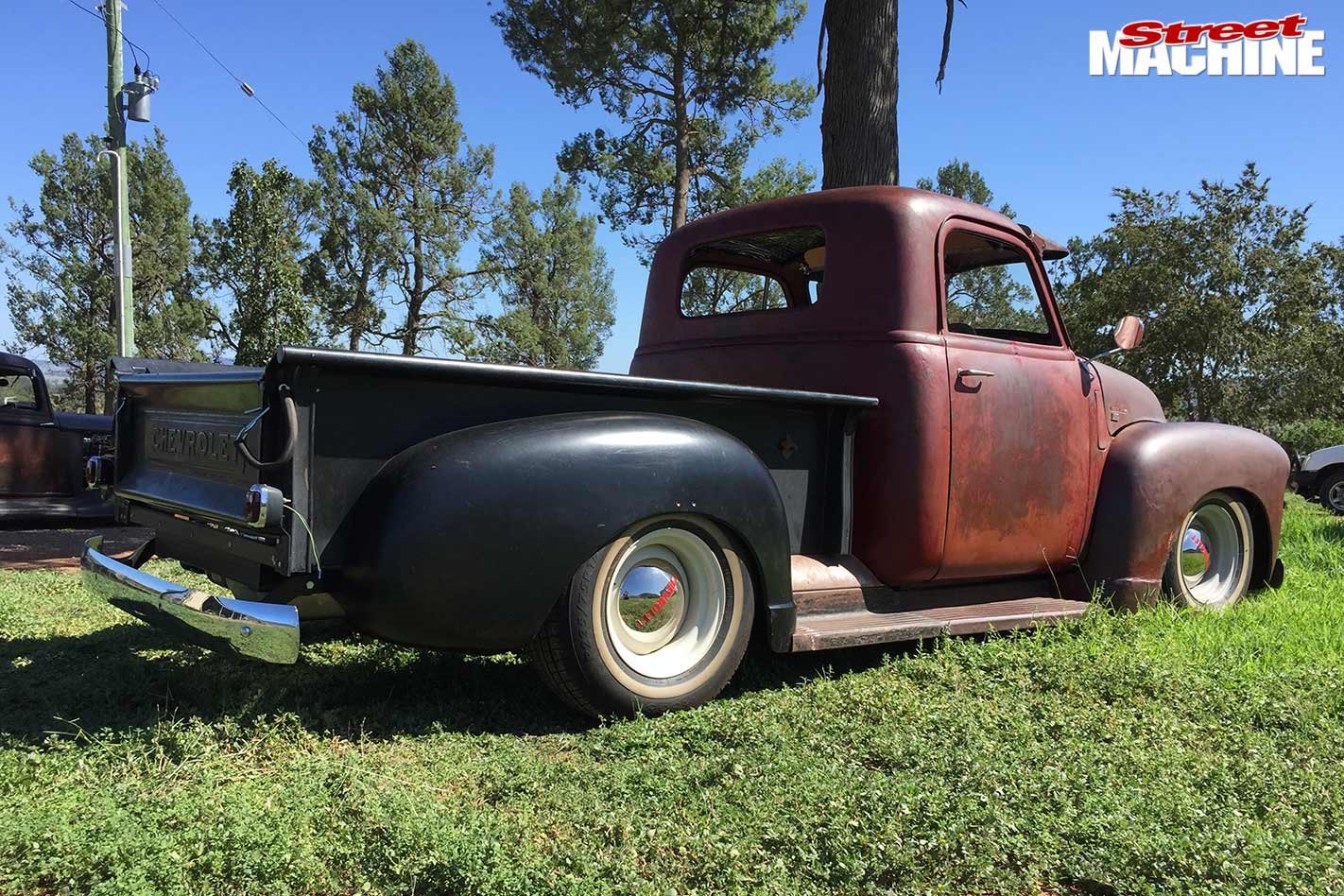 It’s had two metres cut off the rear of the chassis, and I stepped up the rails in the rear so it will lay rails with airbags that will be installed later. The engine is an LS1 that’s had a tune, and the stainless headers run into a custom-made 2.5-inch stainless exhaust system dumped before the diff. 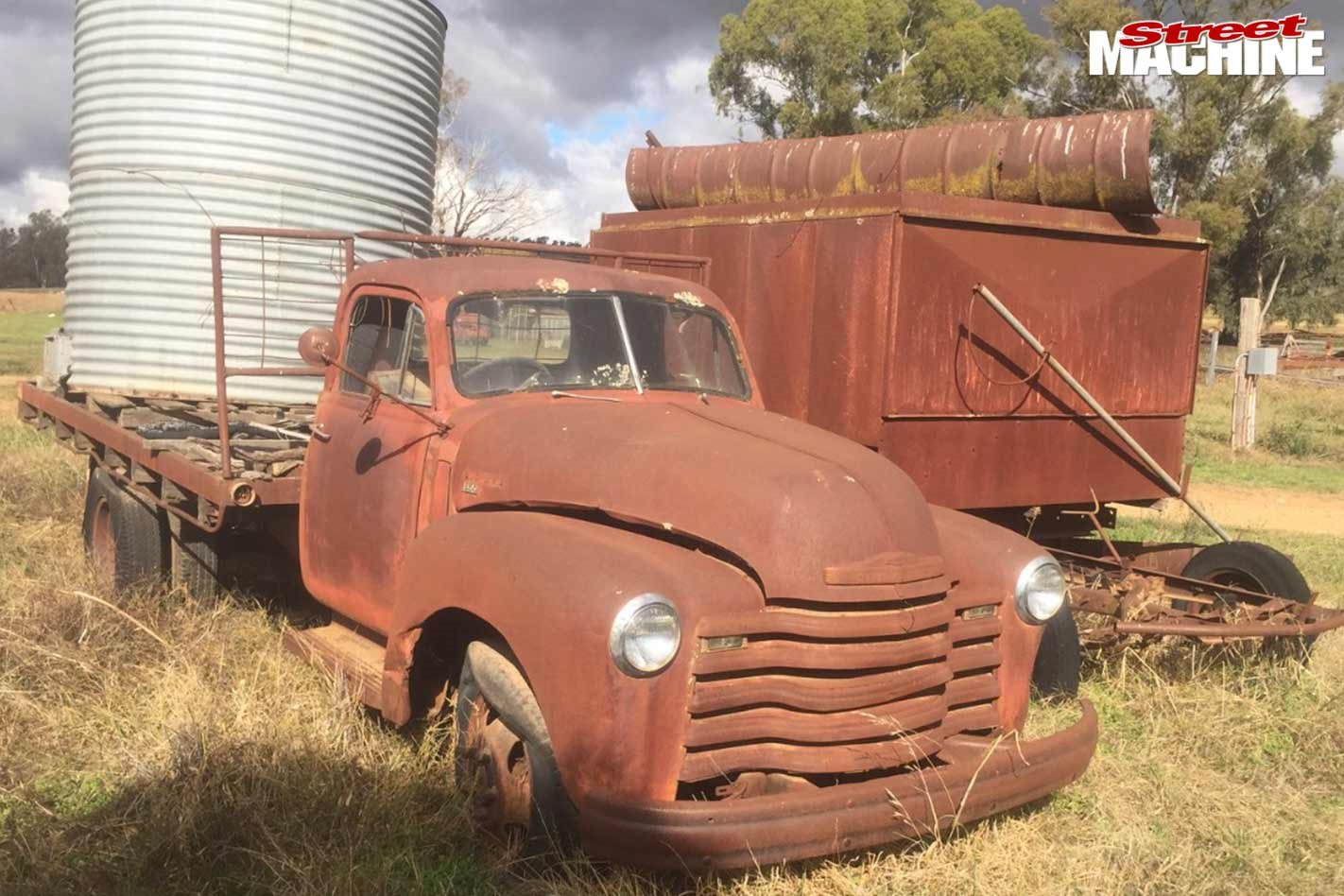 Rounding out the driveline is a 4L60E trans and an eight-inch, four-pinion LSD out of a 1995 Falcon XR8. I also installed the complete four-link and Watt’s link out of the Falcon. The front end is from a Series 3 Jag with power steering and four-spot calipers and ventilated discs. It’s going to be a daily driver, so it’s a column-shift auto with a bench seat from an XF Falcon, as I will be picking my kids up from school sometimes, and nobody wants the centre seat with a gear shifter between their legs! 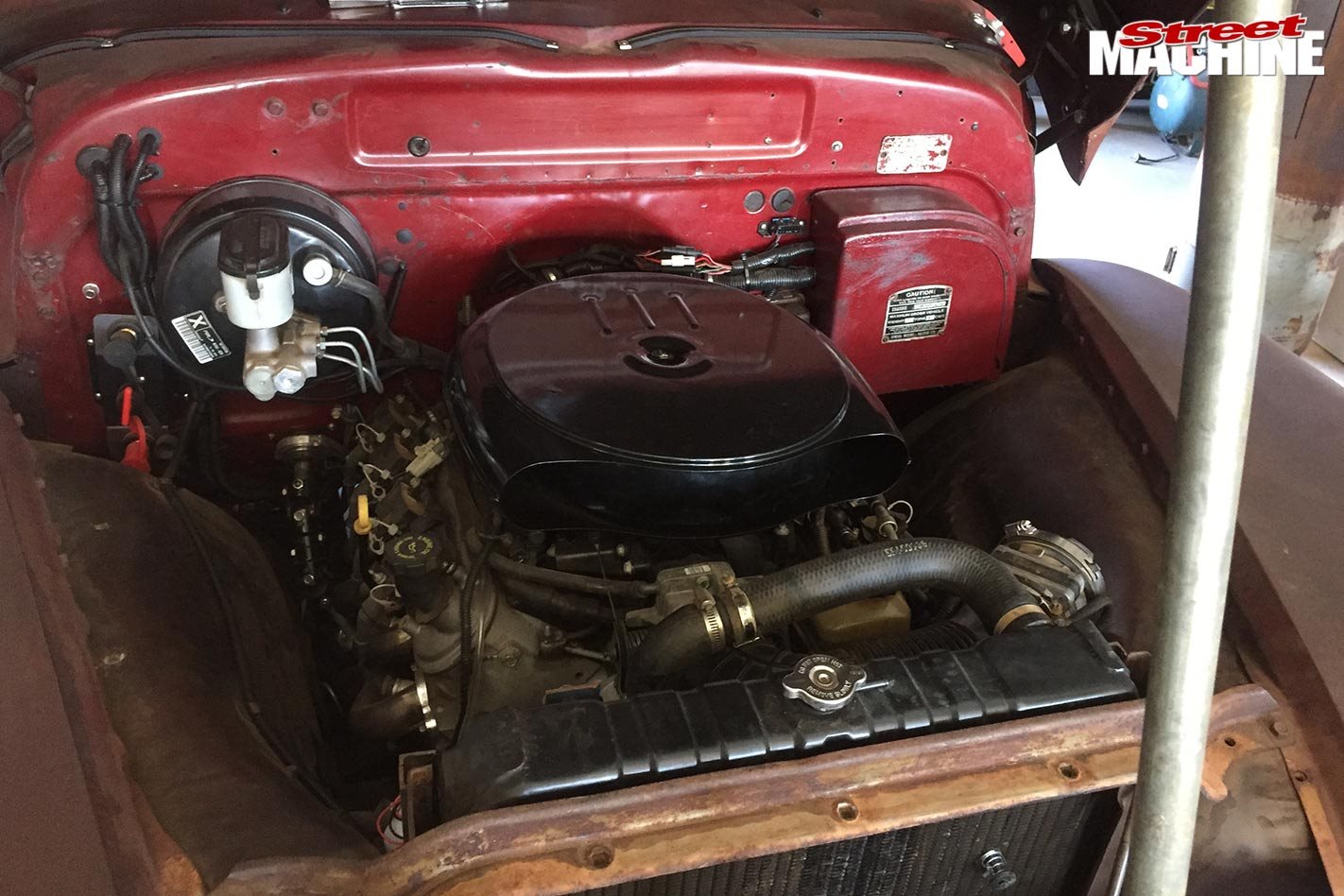 As for paint, the truck’s 70 years of patina is the perfect finish to make people think twice about parking next to me at Woolies! It might look like a weathered old truck, but it’s not lacking in modern comforts: air con, heater, power windows, keyless central locking and Bluetooth stereo system. I’ve done all the work myself in my shed, from the wiring, welding and fab work right through to installing the glass.” 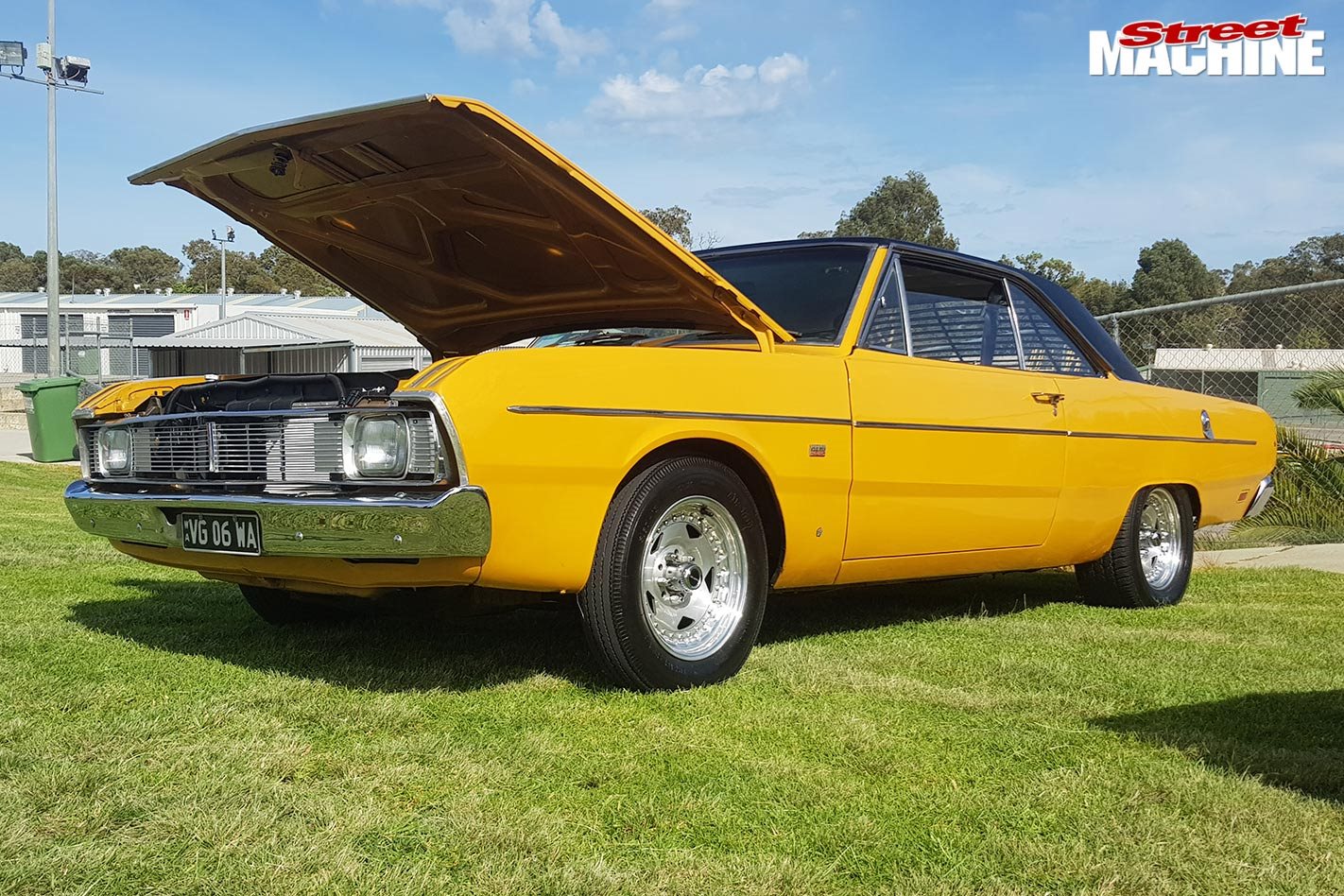 “MY VG coupe is currently in the build. So far it’s had a 6.4-litre Hemi transplant, backed by a 727 Torqueflite manual and LSD. These swaps are pretty easy now, as a lot of items for them are available from the USA and a few shops in Melbourne. 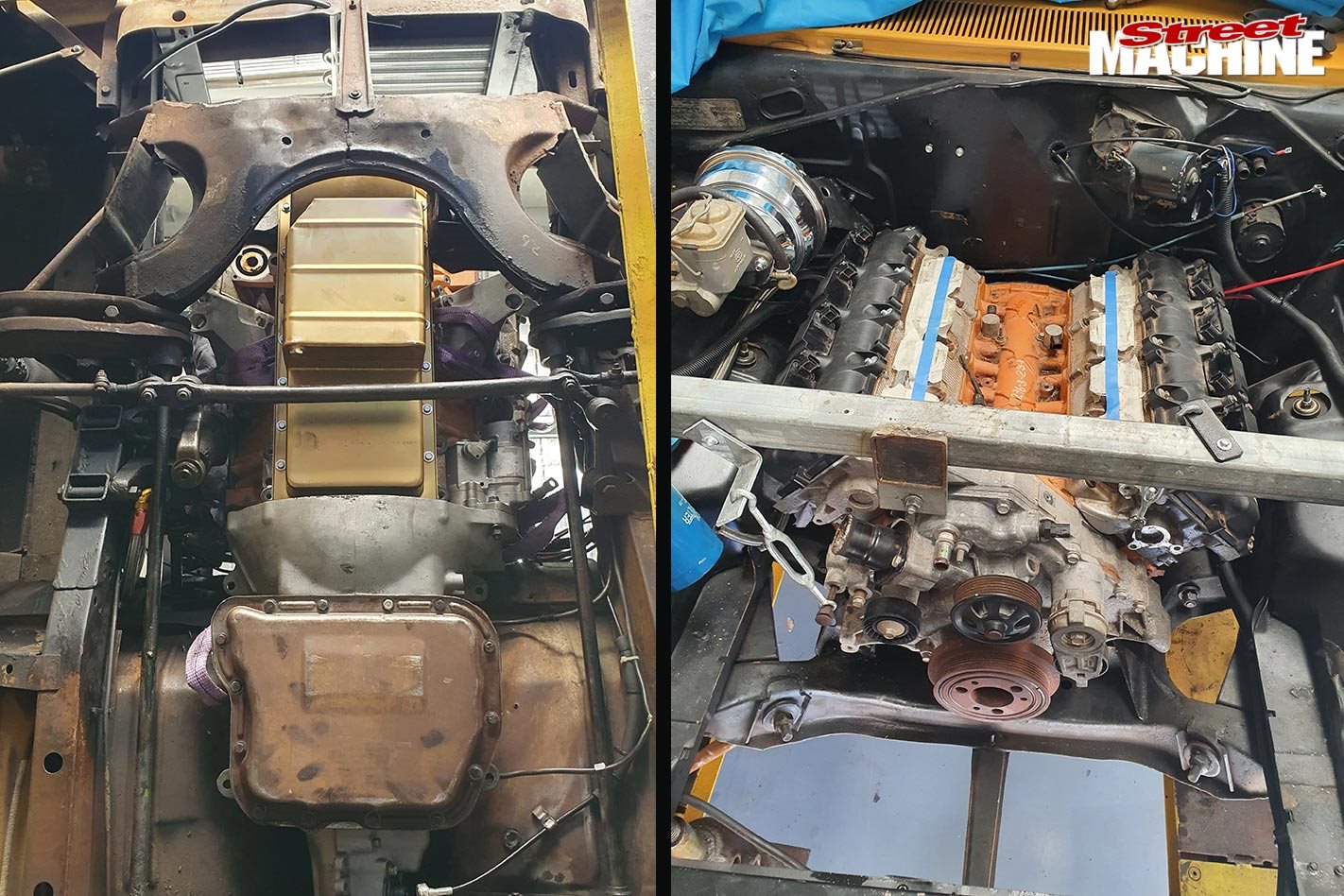 It was a good way to get plenty of power (480hp) from the factory with all the great features of a modern engine, for the same cost as building an LA 360 or similar with less power. And original 727 ’boxes fit right up to the modern 6.4 Hemi. 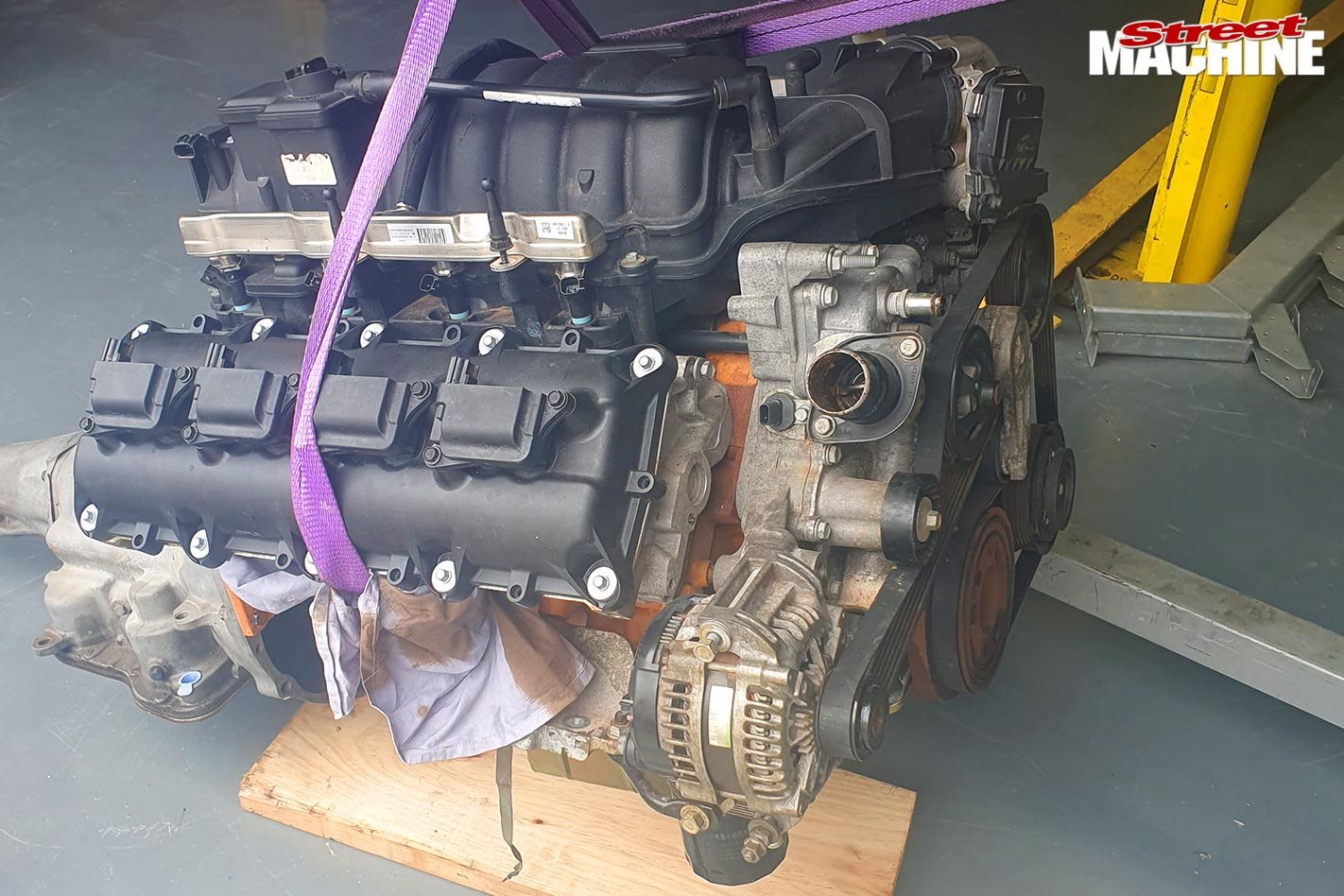 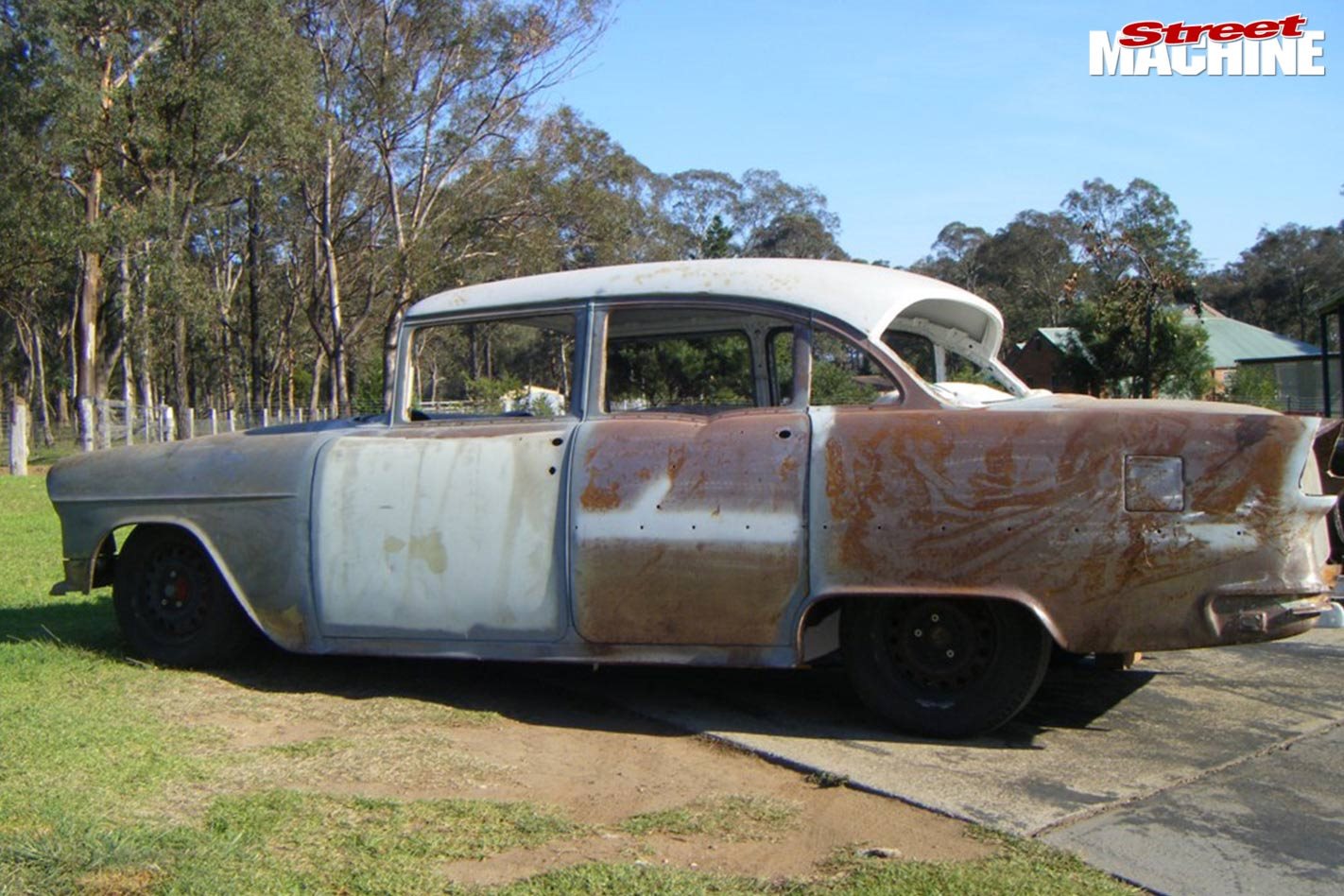 “MY ’55 Chev runs an LS3 with a Magnuson Heartbeat supercharger and a cam to suit. 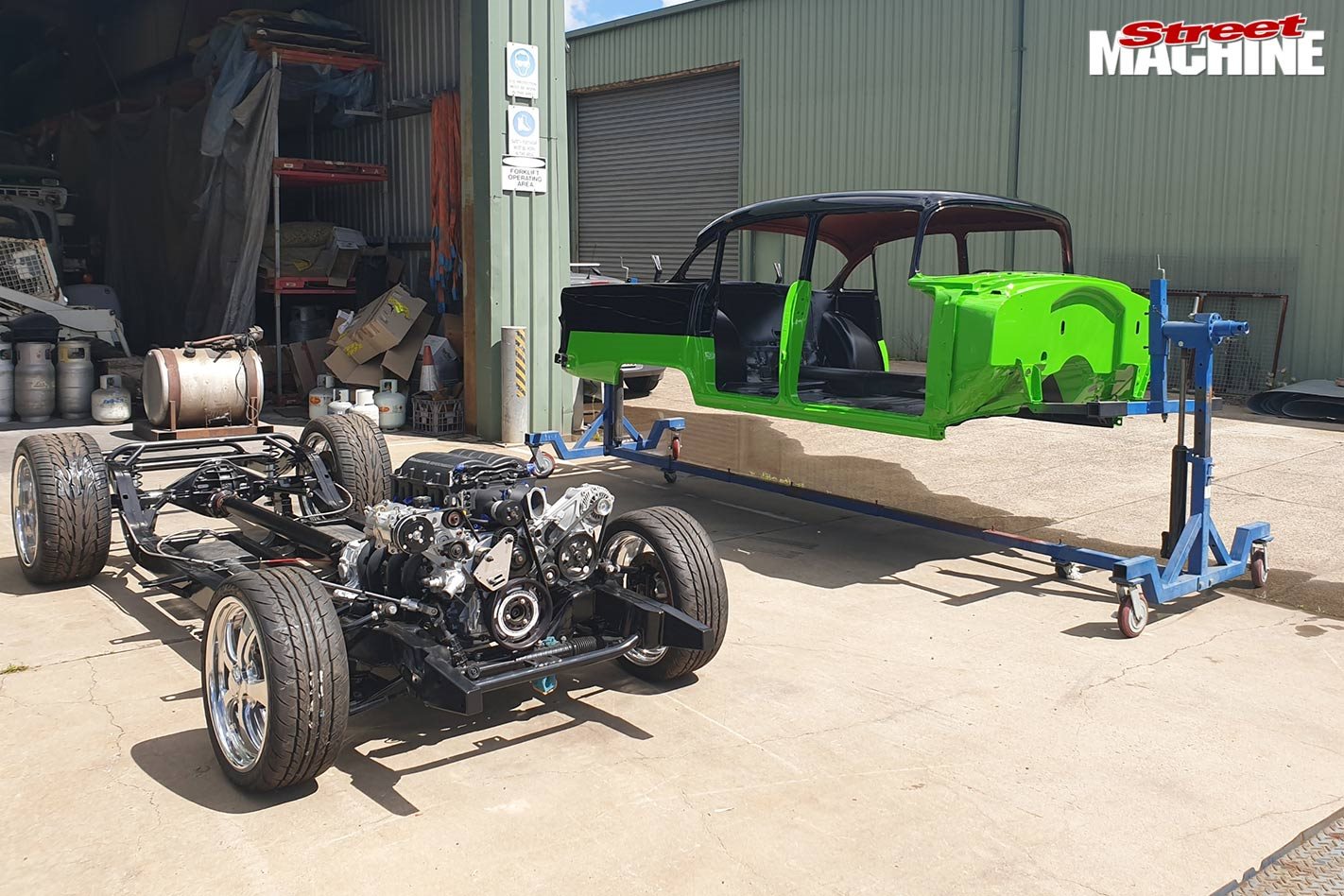 Trans is an Al’s Race Glides full-manual Turbo 400 with a 3000rpm converter, and runs through a Mark Williams tailshaft back to a Strange Pro iron diff centre with 3.7:1 gears. It runs Wilwood brakes all ’round.” 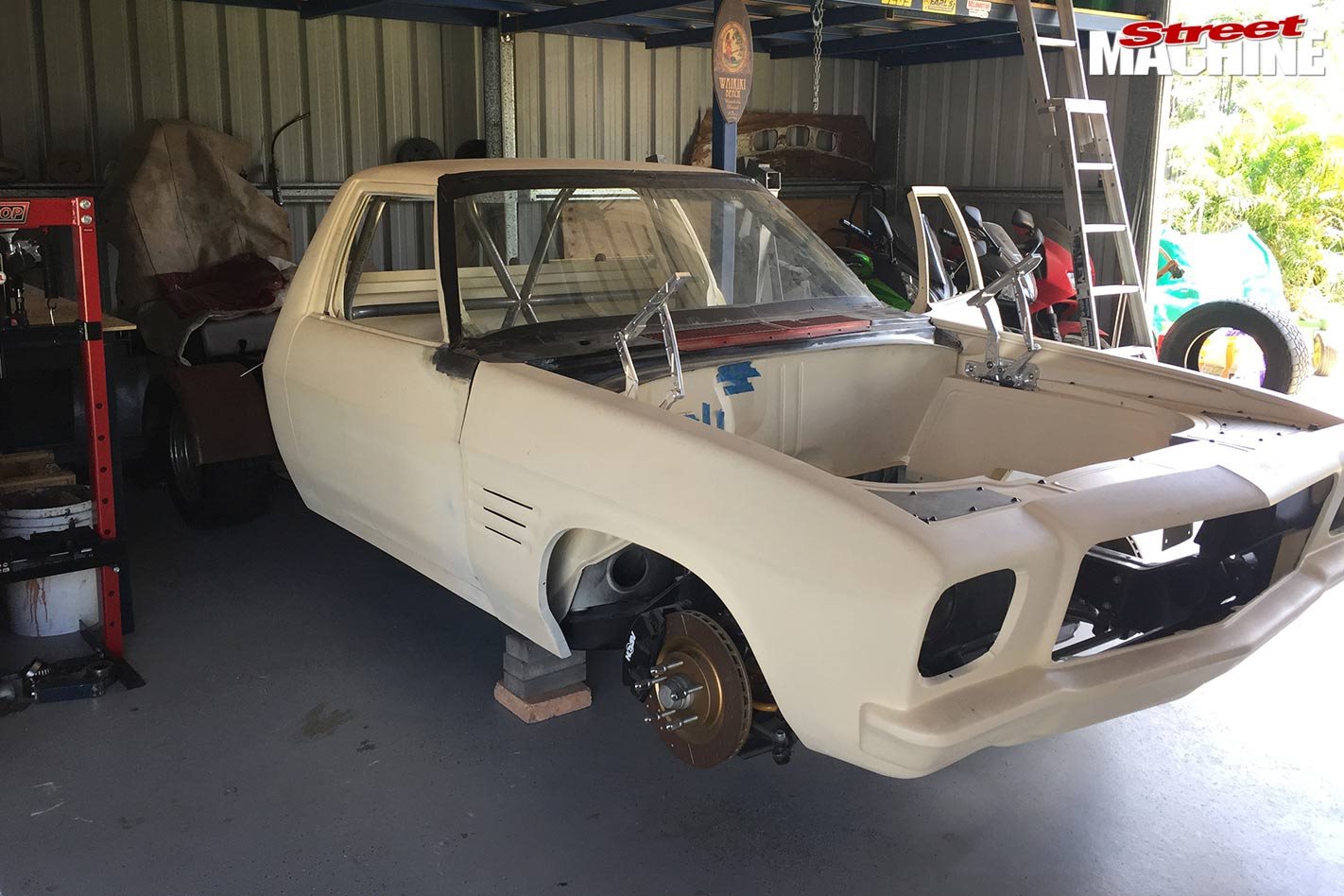 “MY One Tonner is a bitser – HQ front and chassis with an HZ cab – but I wanted something different to the norm. It’s already getting mixed reviews; people either love it or hate it. The chassis will be narrowed at the rear, with tubular crossmembers, shaft loops and extra tube bracing. 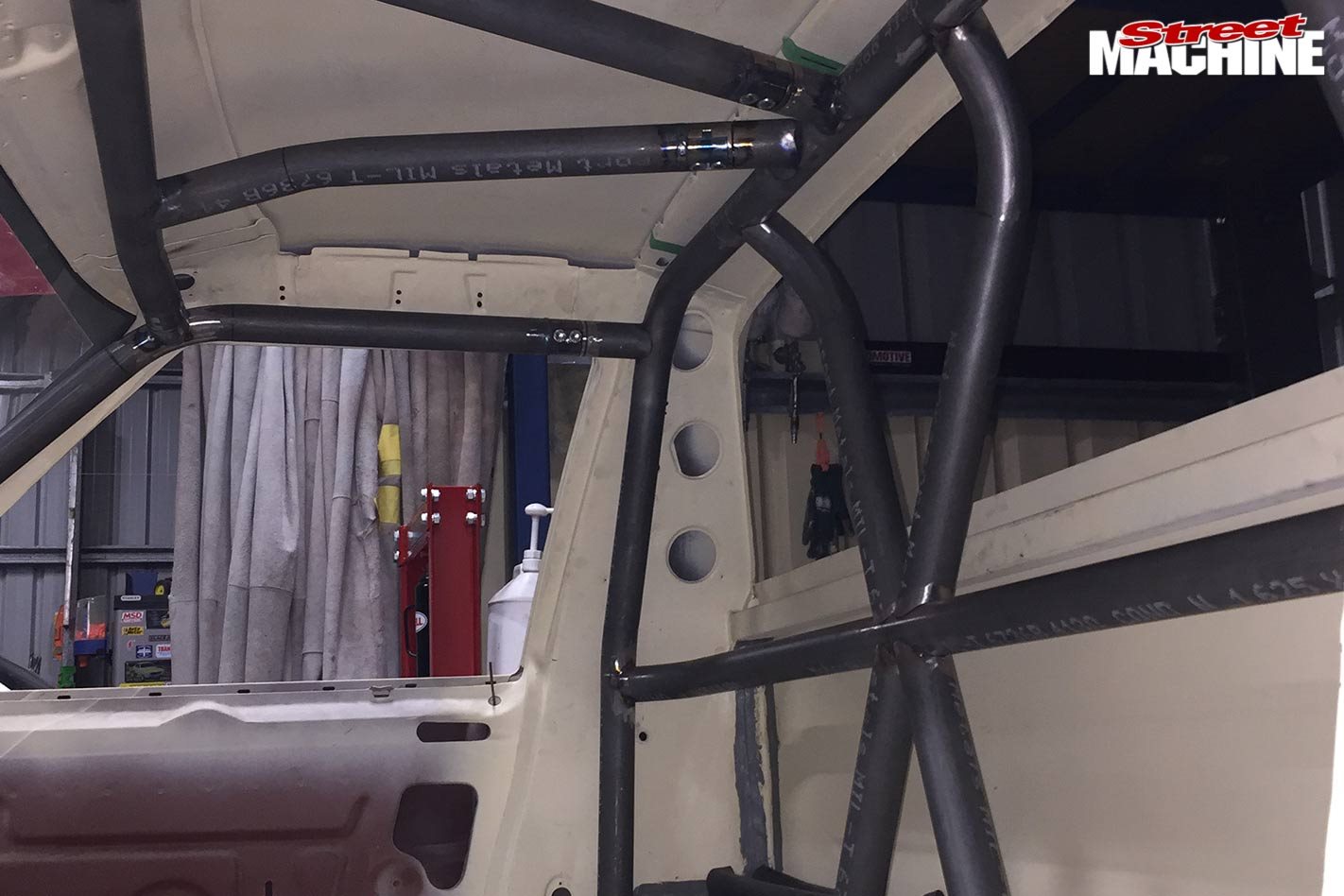 Wheels will be 15×15 beadlocks up front and 17×4.5 rears; I’m leaning towards Billet Specialties Win Lites. The paint will be DNA El Niño orange candy. It will have a full custom leather interior, leather floor and metal roof liner, but the tray will be very minimal. 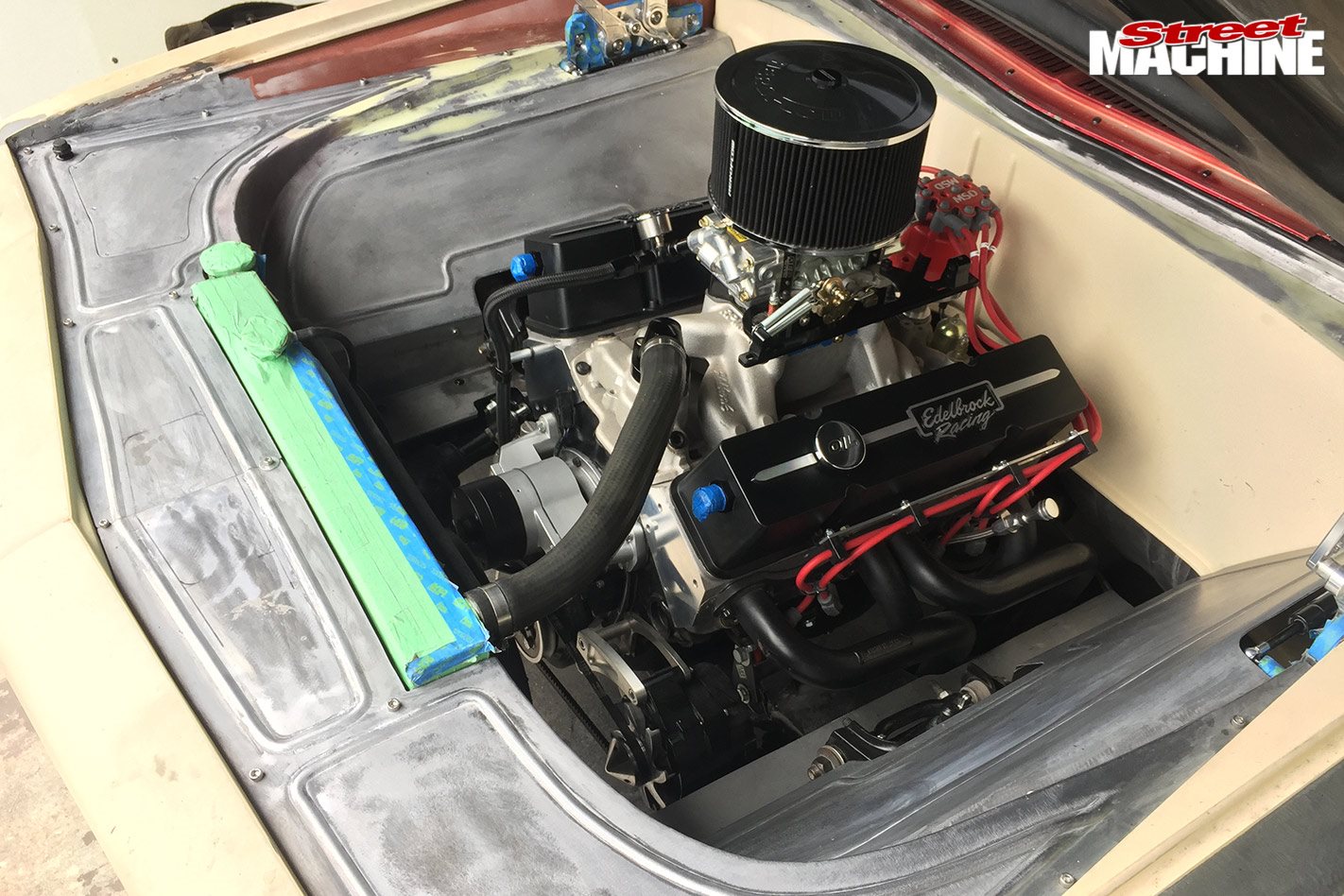 The engine I had built for it was a roller-cammed 383, backed by an AGE custom M22 Muncie ’box, but I decided to put these in another ute I’m building as an everyday driver. So I’m still undecided about the motor and ’box for the Tonner. All the work has been done in a 6×6 backyard shed with minimal tooling. There’s lots more to do; the finish line is still a few years away.” 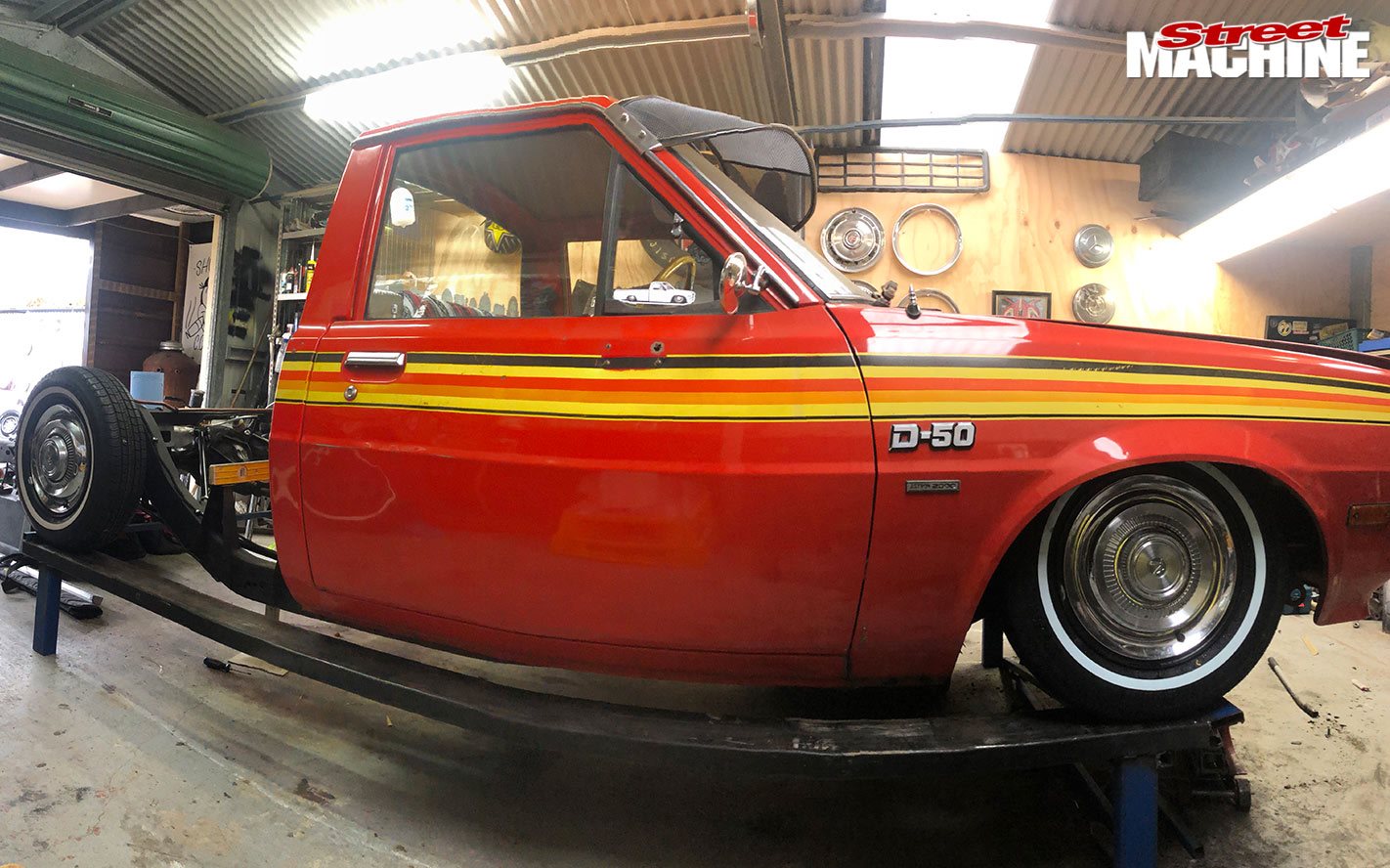 “I’VE owned the D50 for about seven months now. I’ve been told there are only five Chrysler-branded D50s with the Sports stripe here in Australia. It’s had a flow notch put in the rear with a triangulated four-link kit and bag-over-diff set-up. 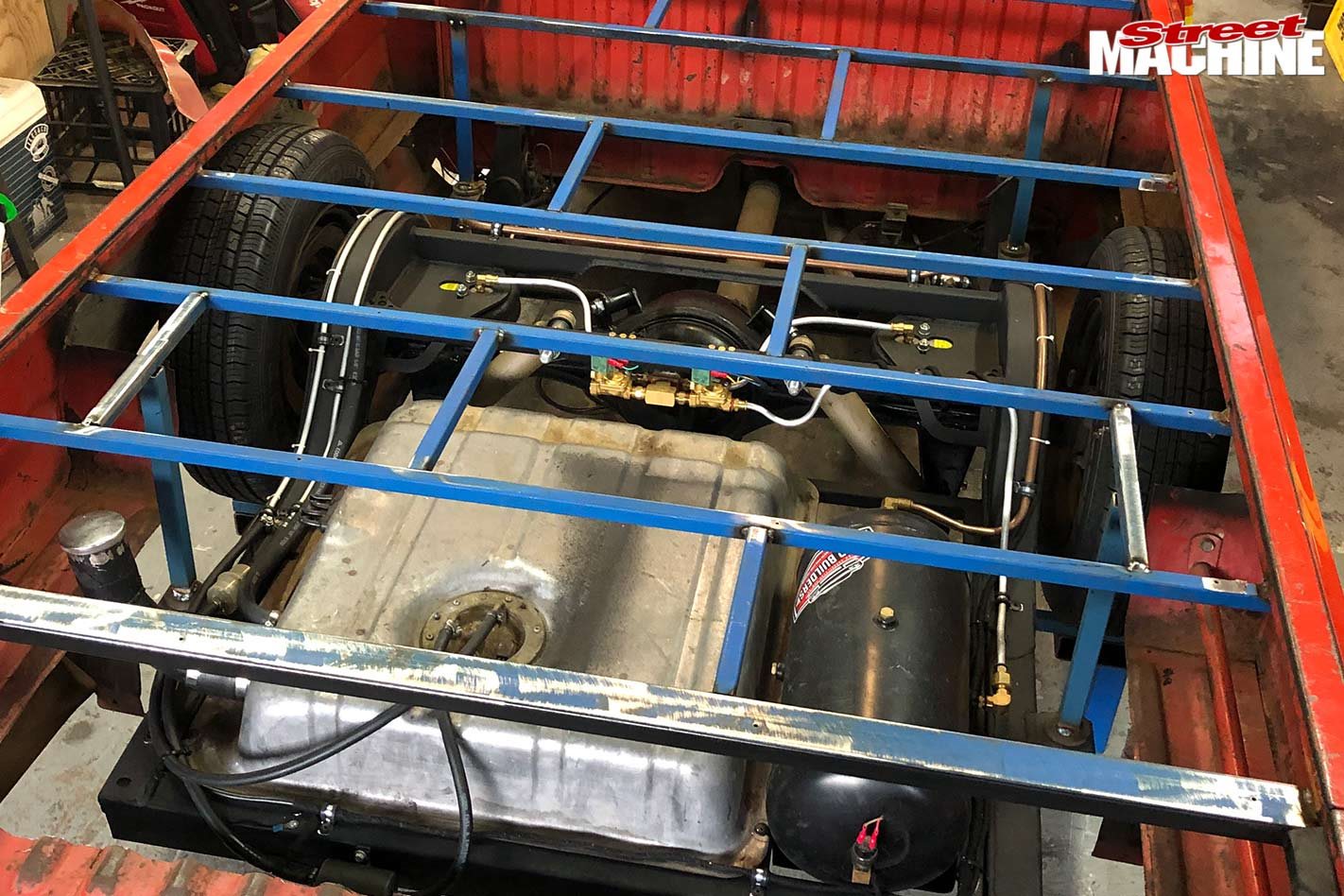 The relocated fuel tank is from an XH ute. It runs the stock L200 front end with custom upper arms to get the front chassis to lay flat. I’m currently in the process of doing a 70mm body drop on the car to get it sitting flat on the ground. Running gear is a stock Astron 2000 two-litre engine and four-speed ’box, but I have plans to turbo it down the track.”

Back from Boot Camp: Mitsubishi unleashes the new Strada Athlete