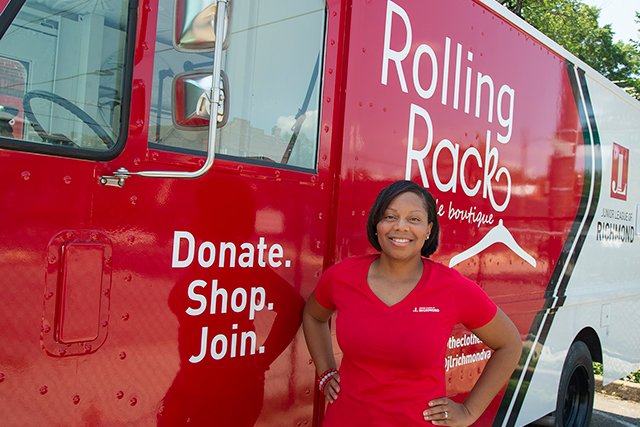 The Junior League of Richmond (JLR) is bringing new meaning to the phrase “pop-up shop” with the unveiling of its new mobile thrift shop, the Rolling Rack. The mobile boutique will provide a mix of free and low-cost clothing to JLR’s nonprofit partners and the Richmond community.

The idea blossomed in the fall of 2018 when Jenna Casebolt, store manager at the Stratford Hills location of The Clothes Rack, one of JLR’s two brick-and-mortar thrift shops, says she was trying to figure out how to make the business side of the store “work with the nonprofit side.”

Both stores have regular paid employees on staff, but they also make ample use of JLR volunteers. “[We want] to keep as much money flowing back into our community projects and programs as possible,” Jennifer Keegan, community vice president for JLR, says. Last year, The Clothes Rack locations grossed about $250,000.

Casebolt reached out to Keegan for ideas, and when Keegan proposed the idea for a mobile thrift truck, Casebolt was immediately on board.

The need for the truck was clear. Though JLR’s two shops have long track records — the Cary Street location has been around since the 1940s — JLR Past President Savon Sampson says one question lingered: “Why aren’t we getting the foot traffic from underserved communities?”

That question planted the seed for the Rolling Rack and its ultimate purpose of serving the broader Richmond community by bringing clothing and other items directly to communities in need.

“We really want to be intentional about helping women,” Sampson says. She anticipates the truck will be used to partner with local organizations to help women to prepare to reenter the workforce or to help those who are coming out of difficult situations and need a fresh start, such as formerly homeless women trying to reestablish themselves.

“[Thirty percent] of the homeless population is made up of women,” Sampson says. “Eighteen- to 34-year-olds are one of the largest [groups]. I couldn’t imagine being homeless in those years. I’ve been so fortunate that’s never been a reality to me. But unless you have true generational wealth, most of us are one situation away from that experience.”

The Rolling Rack is a nimble operation, able to communicate with local partners such as ChildSavers, the Peter Paul Development Center, Doorways and Communities in Schools and bring them only what they truly need at any given time.

“For example, a partner like Doorways [a nonprofit that provides lodging for patients and their loved ones who need to be close to Richmond hospitals] might tell us, ‘We have some folks who have been asking for coats — they didn’t expect to be here as long as they have.’ The Rolling Rack can zero in on those needs and work with whatever merchandise [we have] to provide whatever their constituents need,” Keegan says.

She adds that there are other scenarios where the mobile thrift shop could be useful, such as for back-to-school shopping in under-resourced communities where transportation can present barriers for parents trying to acquire clothing for rapidly growing children.

“We want it to be accessible to anyone because we want people to feel capable of buying what they need for themselves or their families,” Keegan says.

Not everything went according to plan with the launch of the Rolling Rack. After a few delays at the end of 2019, things seemed to be progressing until the coronavirus pandemic descended in March, delaying the shop’s debut.

Keegan and Sampson hope the community will see the effort JLR is putting in to serve and partner with the broader Richmond community and attract new members.

Sampson says there are misconceptions about the Junior League that she hopes increased outreach can help debunk. “The League has this stigma that it’s a white woman’s organization,” she says. “Are we representing the Richmond community? We’re growing there. We’re in a lot of underserved communities, and a lot of the kids look like me. I’m brown. I want to make sure it’s not just ‘white girls’ who are helping, it’s brown girls, too.”

“I’m hopeful we’re seen as a benefit and tool to the greater community,” Keegan adds. “I hope [the Rolling Rack] gets people open to thinking of the Junior League for donating, and I hope women in the community see this as a great opportunity to serve and think, ‘I’d like to join.’ ”

The Rolling Rack will debut from noon to 4 p.m. on Saturday, July 25, at The Clothes Rack, 2618 W. Cary St. There will be music from a local DJ and food trucks including King of Pops, all outside for easy social distancing.

Never miss a Sunday Story: Sign up for the newsletter, and we’ll drop a fresh read into your inbox at the start of each week. To keep up with the latest posts, search for the hashtag #SundayStory on Twitter and Facebook.