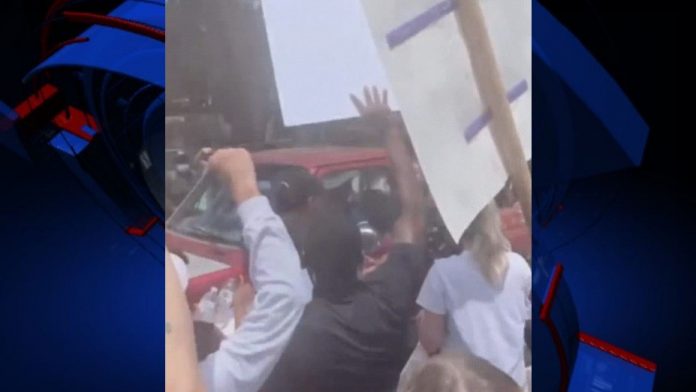 TALLAHASSEE, Fla. (CNS) — The state capital was relatively calm Monday after a weekend of protests.

Protesters are seeking answers about three officer involved shootings in the last three months in the Capital City.

Just three dozen or so protesters were at the Capitol Monday, following hundreds who spend the weekend there.

“From the time Michael Johnson died on March 20 of 2020, there has been no legal action or ramifications against anybody who has the position to do so,” said protest organizer Tesia Lisbon.

Windows shattered by protesters on Saturday were boarded up by Monday.

The calmness is far cry from Saturday, when tensions flared after a red pick up truck made it into the center of a marching crowd.

A second video shows the crowd following the truck and officers protecting the driver.

“There is some indication from the people who were in the truck that they were being punched. We found some video of the passenger being hit. That would raise a possible self defense claim,” said Campbell.

The cases of the three officer involved shootings are at a standstill.

That’s because they must be reviewed by a grand jury, and the virus has put grand juries on hold until at least July.

Until a grand jury can meet, the officers will remain on paid administrative leave.

Demands for body and dash cam video will also be on hold until the grand jury hears the cases.

No one was seriously injured in the incident with the truck.

Protesters are demanding the driver be arrested.