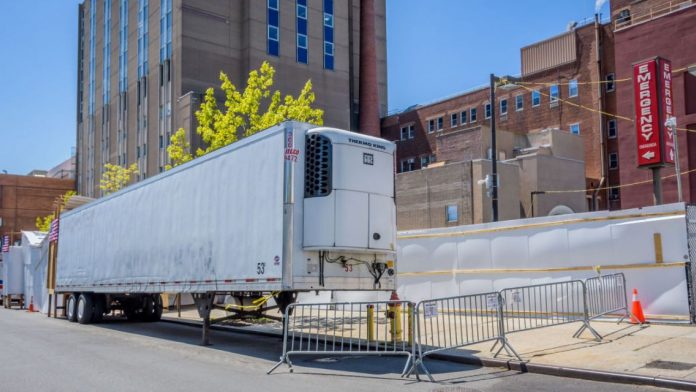 Dr. Sarah Fortune, chair of the Department of Immunology and Infectious Diseases at the Harvard T.H. Chan School of Public Health, discusses superspreaders and their role in transmitting COVID-19.

Some Arizona and Texas counties are running out of space in their morgues and have put out calls for refrigerated trucks in which to store bodies and help take some pressure off of local medical examiners’ offices.

A long-expected upturn in U.S. COVID-19 deaths across the U.S. has begun, driven by fatalities in states in the South and West.

The number of deaths per day from the virus had been falling for months, and even remained down as states like Florida and Texas saw explosions in cases and hospitalizations — and reported daily U.S. infections broke records several times in recent days.

Scientists warned it wouldn’t last. A coronavirus death, when it occurs, typically comes several weeks after a person is first infected. And experts predicted states that saw increases in cases and hospitalizations would, at some point, see deaths rise too. Now that’s happening.

In hard-hit Houston, Texas, two top Democratic officials called for the nation’s fourth-largest city to lock back down as area hospitals strained to accommodate the onslaught of sick patients.As COVID-19 deaths rapidly increase in Texas and Arizona, the two emerging hot spots of the novel coronavirus are facing a similar scenario to New York’s experience during the onset of the pandemic in March.

In Arizona, one Phoenix hospital has called for morgue trucks to help alleviate a rapidly growing death count due to the ongoing pandemic.

A spokesperson for Abrazo Health told FOX 10 Phoenix that while its hospitals currently have adequate morgue space, the state has asked hospitals to implement emergency plans.

“Abrazo hospitals currently have adequate morgue space. The state has requested that hospitals implement their emergency plans. Part of activating our plan includes the ability to handle overflow morgue capacity if needed. Abrazo has taken a proactive approach by ordering refrigerated storage in the event it may be needed during a surge of COVID patients,” the spokesperson said.

“At this point it is not needed. We do agree with the Mayor’s points around promoting awareness around masking, continuing to practice social distancing and seeking medical care in the event of an emergency need,” the statement continued.

Banner Health, also based in Phoenix, has a contingency plan in place for when and if their morgues reach capacity.

The Maricopa County Medical Examiner’s Office is also making preparations for an influx in corpses amid a COVID-19 surge in Arizona.”Our planners at Unified Command are moving toward acquiring coolers and staffing because Office of the Medical Examiner is currently near capacity for body storage. This is a situation that occurs almost every summer and is further complicated by the current pandemic,” a statement from the medical examiner’s office said.

The Arizona Department of Health Services said that 671 COVID-19 patients were on ventilators and 936 were occupying ICUs as of July 12. Hospitals were hovering around 90% capacity, according to FOX 10.

Arizona public health officials reported another 1,357 confirmed COVID-19 cases and an additional eight deaths as of July 13.Arizona has so far seen 123,824 cases and 2,245 deaths, but the actual number of COVID-19 infections is thought to be far higher because many people have not been tested, and studies suggest people can be infected with the virus without feeling sick.

In Texas, several counties have called for refrigerated trucks in preparation for potential morgue overflow.

As Texas continues a weeks-long streak of setting grim records, another somber one was reached Friday as the state surpassed 3,000 lives lost to COVID-19, according to the Department of State Health Services. Just a day before that, the state reported more than 100 deaths in a single day.

In addition to those deaths, Texas reported a new high for hospitalizations for the 10th consecutive day, according to FOX 26 Houston.

“That’s why we’re asking people to wear face masks,” Nueces County Judge Barbara Canales told local media. “I am now having to order additional body bags and morgue trailers. People have to understand how real it is.”

In Nueces County, the morgue is already at full capacity, and Nueces County Medical Examiner Dr. Adel Shaker has requested an extra morgue trailer to help with the overflow, according to the Texas Tribune.

“We have seen very few deaths for the first few months of the pandemic, so the FEMA trailer was placed in another city. But the need is here now,” he said.

Nearly 40% of Texas’ fatalities were residents of long-term care facilities, such as nursing homes or assisted living facilities. Other hotspots included prisons and meatpacking plants, according to the Texas Tribune.

Austin and Travis County are “in the process of procuring a refrigerated truck to face the surge in COVID-19 deaths,” Travis County public information officer Hector Nieto said.

“Our hope is we never have to use it,” he told the newspaper.In addition, Hidalgo County announced on Friday that they too will be requesting a refrigerated FEMA trailer and will be sharing it with neighboring Cameron County.

“I’m going to let them take this one, because they are in dire need,” Ricardo Saldaña, Hidalgo County emergency management coordinator, told the Texas Tribune.

RELATED: Texas reports more than 100 COVID-19 deaths in a single day for the first time

Researchers expect deaths to rise in the U.S. for at least some weeks, but some think the count probably will not go up as dramatically as it did in the spring because of several factors, including increased testing.

The World Health Organization, meanwhile, reported another record increase in the number of confirmed COVID-19 cases globally over a 24-hour period, at over 230,000.

The UN health agency said the United States again topped the list among countries, with more than 66,000 cases. The figures don’t necessarily account for delays in reporting cases, and are believed to far underestimate actual totals.

The Associated Press and FOX 10 Phoenix, FOX 4 Dallas-Fort Worth and FOX 26 Houston contributed to this report.