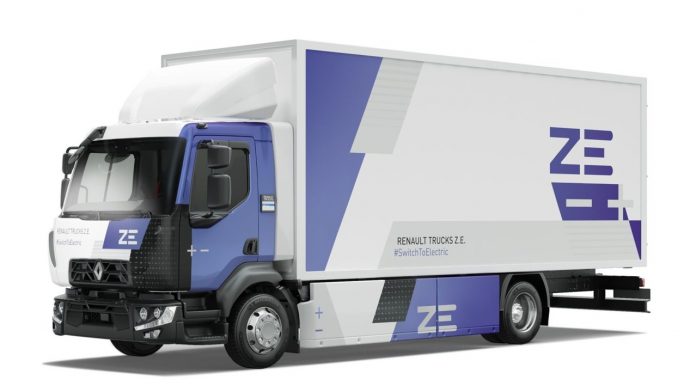 Renault’s revolutionary new battery-electric D Z.E. freight truck has been in construction since March of this year, but was delayed several months thanks to the global coronavirus lockdown. Despite each truck only taking 50 hours of assembly work from start to finish, this one has been on the production line for several months. The electric freighter was finally delivered to Delanchy Group where it will deliver fresh food throughout France.

Renault has been testing prototype electric delivery trucks since 2017, and this 15 T behemoth has finally reached the production stage. The D-series of Renault trucks can be retrofitted for all kinds of work, including refrigerated trucking like this one, a standard box truck, or a garbage collector. Renault claims that the electric D is capable of around 121 km of range during waste collection operation, which should be more than enough. More importantly, the truck can easily be recharged overnight while back at the depot, or in under 2 hours at a fast charger. Depending on the bodywork tacked on the back of the truck, it is capable of hauling 11 tons at a time.

Delanchy has apparently had a collaborative relationship with Renault for 50 years, and has been testing Renault’s electric delivery truck prototypes on French streets for a few years now. The earlier 12 T version of this truck has served well, making daily refrigerated food deliveries to a grocery in central Lyon.

“A committed haulage contractor in terms of electric mobility, we were keen to be involved in developing a zero-emissions refrigerated delivery solution for city centres,” explains Yannig Renault, Technical Director at the Delanchy Group. “We were able to test and validate this technology thanks to the 100% electric Renault Trucks D prototype, which we were pleased with both in terms of its use and maintenance.

I’m sure that it’s simply a coincidence that the technical director of the Delanchy Group has Renault as a surname.

Being that this is the very first D Z.E. off the line, and given that Delanchy currently employs a fleet of 340 trucks to carry its produce, it’s a small drop in the bucket, but we have to start somewhere.

If all of the current diesel short-range delivery and trash collection trucks were slowly phased out for electric trucks like this one, not only would city centres experience improved air quality, but noise pollution would also decrease. Think about how often you’re awoken on a weekday morning to the sound of an early garbage truck arrival. That would be a thing of the past.

While the initial buy-in of the truck might be a little more than the old faithful ICE delivery trucks, the long-term operational costs have already proved themselves to be lower. No more messy oil changes, gross dirty diesel pumps, or exploded turbochargers, just plug in at night and go in the morning. Fuel costs? What are those?

This is a segment of the EV market that I’m most excited about, to be quite honest. This kind of truck doesn’t have much use for over-the-road trucking, sticking largely to in-town operation. Which means the 121 km range should be plenty for most delivery or pickup routes. It’s not only better for the environment, but it’s significantly less annoying to hear and smell on the road.

More of this, please.

Some Tosa businesses are getting creative when it comes to operating...