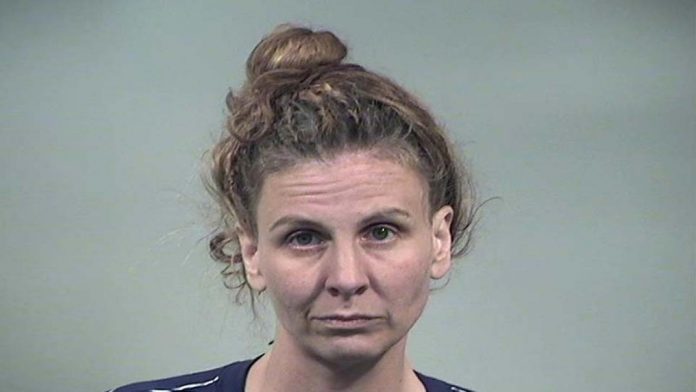 The suspect was stopped in a U-Haul truck that she drove to the store, according to a police report

LIBERTY TWP, Ohio (WKBN) – A woman was taken into custody on Monday after Liberty police say she returned to the store to get a bag she dropped during a previous shoplifting incident.

Around 12:57 p.m., Liberty police were called to the Walmart on Goldie Road after reports of a shoplifting suspect coming back to the store to get a backpack she dropped while running away.

According to the police report, 42-year-old Amber McConahy, of Sharon, Pa., was seen bagging merchandise and leaving the store without paying for them on Sunday.

The report said McConahy was then confronted and ran away, dropping a blue backpack containing her Social Security card and other items.

When police arrived at the store on Monday, a U-Haul truck that was parked near the store took off westbound toward Taco Bell. Police conducted a traffic stop and the driver, McConahy, tried to get away before she was ordered back into the truck, reports said.

Police said McConahy had a suspended license, and she was taken into custody. A passenger in the vehicle was also detained, police said.

While searching the truck, police reported finding several digital scales with residue on them and a debit card that did not belong to either of the occupants.

McConahy was noted to be out on bond from Girard Municipal Court on felony fleeing and eluding charges. She was taken to the court and her bond was revoked.

About two weeks ago, McConahy was charged after police said she appeared to swallow drugs during a high-speed chase in Liberty.

Several credit cards, drug paraphernalia and a stolen prescription pad from a Cortland dentist were found in that case, according to police.

Now, McConahy is charged with driving under suspension, theft and possessing criminal tools, among other charges.

Police said a review of surveillance footage showed that on May 30, while security was watching McConahy, another woman loaded up a shopping cart, left the store without paying for them and loaded the stolen items in a U-Haul truck.

They said the woman is seen doing the same thing on Friday’s surveillance video. That suspect was wearing a mask that covered most of her face.

The incident is still under investigation.

RCMP have found the owner of a truck abandoned at Galena...

One dead, one charged after Thomasville wreck in stolen vehicle