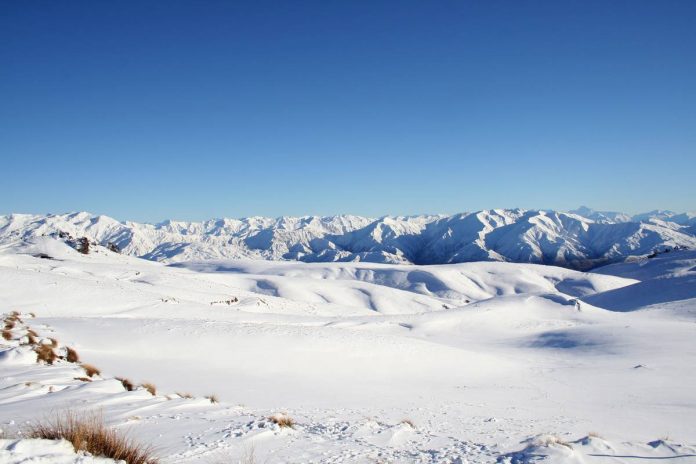 A skier has incredibly survived after tumbling 400m in New Zealand’s high alps on to a glacier.

The man had climbed Mt Aspiring, northwest of Wanaka, with a friend on Thursday and was skiing down its technical West Face when the descent went wrong.

Despite seeing his companion tumble below, the man’s friend was able to compose himself enough to complete his own descent and seek out his injured mate on the glacier.

He then set off an emergency beacon that brought rescuers Lionel Clay and Gary Dickson flying on to the mountain in a helicopter within 45 minutes.

Incredibly, the man appeared to escape the ordeal with only leg injuries and was airlifted to Dunedin Hospital.

It was a very, very fortunate outcome, Clay said.

“The West Face is well known to us, it is the scene of a reasonable number of accidents and they generally don’t have happy outcomes like we had.”

Clay attributed the man’s survival after the fall to the experience of everyone involved – including the rescue team, who mobilised and arrived on the mountain in lightning fast time as they raced against the closing dark of the night.

The pair skiing the West Face were Wanaka locals – with one being a New Zealand resident and the other a Kiwi citizen.

“It probably gets skied once or twice a year.”

The pair were very experienced and knew what they were doing, he said.

“But unfortunately one of them took a fall, and it is quite steep so once you take a fall there is no recovery,” Clay said.

“He fell about 400m, and ended up on the glacier below.

“His mate continued to ski down – which is quite a great feat to mentally keep it together after what you’ve just witnessed – and found him.”

The man’s buddy then continued to do everything right.

He set off an emergency beacon, got his mate off the snow’s surface, put him in a survival blanket, and built a snow wall to stop the howling wind beating in.

Meanwhile, Clay had been on his own ski trip to the Remarkables and had only just returned to Wanaka when he got the call a rescue was up.

Jumping back in his truck, he raced to meet fellow rescuer Gary Dickson and Aspiring Helicopter pilot James Ford.

Normally the team aim to be airborne 30 minutes after getting an alert. This time they took off in 20 minutes.

Forty-five minutes after the emergency beacon went off, they were onsite on the mountain – “which was pretty damn quick”, Clay said.

With he and Dickson – who received a Queen’s Service Order in this year’s New Year Honours – being among the country’s most experienced alpine rescuers, they knew what gear to pack in a hurry.

They had also assessed there was only about one hour of daylight left for the helicopter to operate in.

“We really understood the need with the remaining daylight and incoming bad weather to get going.”

The injured man wasn’t critical when Clay and Dickson arrived, but there was little time for any expressions of relief with just minutes of daylight left.

As rescue co-ordinator, Dickson checked on the uninjured man, called in an air ambulance, and co-ordinated with base.

Clay as medic made a rapid assessment of the injured man.

With the man seeming to have only hurt his legs and not being in a critical state, they decided that rather than try to treat him in hostile conditions, they packaged him up and got him in the chopper.

They also grabbed his buddy, but dropped in at the base of the mountain on the valley floor before racing off to meet an air ambulance at an airstrip in the Shotover Valley.

“We could see them coming in and landed there at the same time,” Clay said.

He did a verbal handover of the patient to the paramedic who then flew the injured man to Dunedin Hospital.

Clay and the team then returned to the valley where they picked up the man’s buddy and their extra gear, before flying home to Wanaka.

He refused to accept much credit for the rescue.

“The Alpine Cliff Rescue team in Wanaka is filled with professional mountain guides and very experienced mountaineers,” he said.

“We’re very used to being in town and then within half an hour being put in an environment like that, so it is just another day in the hills.”

The key to the rescues were really the team and their training, from the incident management guys in headquarters to the pilots.

“It is not two heroes that bugger off into the sunset and rescue people – there is a lot more to it than that,” Clay said.

“It is very much a team effort.”

Pickup Truck Wrongfully Overtakes Car and Gets Pulled Over by Cops...