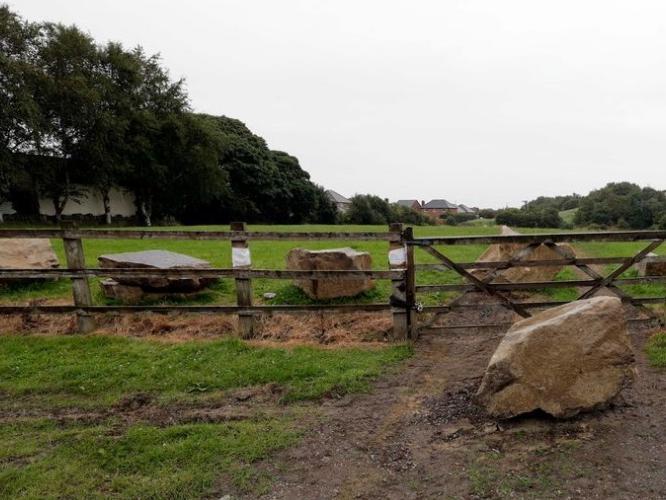 Playing fields at Grange Moor with boulders that travellers attempted to remove to gain access to the site.

A large traveller group was evicted from the site off Briestfield Lane a month ago.

But members of the same group are understood to have returned late on Monday night.

Four men pulled apart a fence before physically moving a large boulder to allow vehicles to enter the land, which is owned by Kirklees Council.

They left the scene when nearby residents approached. Police officers also attended.

Local men then used vehicles to roll the boulder back into place.

And they used a pick-up to drag bottle recycling bins across the entrance to block access.

However they fear that there will be a repeat of attempts to break into the field following the incident at 10.30pm on Monday.

One resident said: “We are surrounded by fields in Grange Moor.

“We can’t police it 24/7. It’s obvious that the travellers are coming in from somewhere.

“If they can get access and if we can’t police it then they’ll be on that site again.

“We are worried that they will come back and we will be in the same situation again.

“Everybody was joining in to help. We want to secure our village.”

Another resident suggested digging a trench in front of the boundary fence to the fields to prevent access by large vehicles.

Coun Smith said he had asked for council staff to visit the area and to consider whether boulders could be cemented into the ground to deter access.

He added: “I thought we had made it safer for residents but clearly the travellers are looking for an opportunity to come back.

“I’ve written to the council calling for more action.”

Coun Armer met with local people to discuss their concerns. He concurred with residents that a trench could be a deterrent.

He also expressed concern that a large traveller group moved from fields near to Yorkshire Sculpture Park could end up in Grange Moor.

In June Kirklees Council was criticised for its slowness in moving the travellers from their illegal encampment in Grange Moor.

It followed complaints of noise, anti-social acts such as people defecating on open land, and intimidatory behaviour.

The Labour-led authority eventually applied to Huddersfield County Court for a possession order, which was enforced on June 29.

However Tories called for the council to speed up the process by hiring High Court Enforcement Officers – bailiffs – using reasonable force to evict trespassers.

Kirklees Council sent an officer to the land off Briestfield Road to check that boulders were still in position.

However the authority has warned that nearby land – including playing fields on Liley Lane – is privately-owned and so the cost of removing travellers that may camp there is not its responsibility.