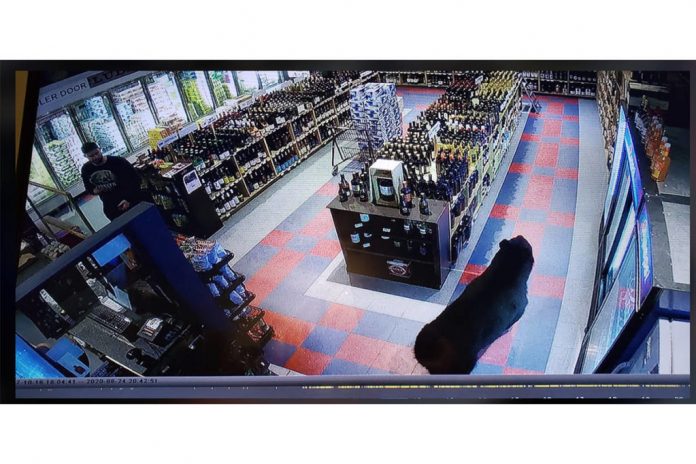 The owner of Last Call Liquor Store had a recent unexpected furry visitor.

“I think he came in for a stroll,” said Claudio Brunetti.

In the evening of Aug. 24, a black bear entered the liquor store in downtown Revelstoke. Brunetti said the door was propped open for COVID-19, so customers wouldn’t touch the handle.

At the time, there was one other customer.

“He just stood there. Shocked. I think he held his breath,” Brunetti said.

It was the customer’s first time seeing a bear.

“And he was only five feet away,” said Brunetti.

Soon, the bear left the store and ran across the street and climbed a tree. Eventually the bear left downtown, crossed the railway tracks and retreated into the woods.

“He didn’t have ID, so I couldn’t serve him,” joked Brunetti.

“It’s distressing that this happens.”

It’s probably the same bear, she said, that earlier ripped off the door of a pick up truck.

The last couple days have been busy for the society, with multiple bear sightings in town, including a grizzly.

This will be the sixth bear killed this summer. Another was shot by conservation officers last week, when the bear cornered someone at a construction site. A bear that wandered into the local pet store earlier this summer, was also later killed.

Spizzirri said the recent black bear must have had a high level of habituation to be able to waltz into a downtown liquor store, making it dangerous.

Last year, a bear charged a resident in their yard, resulting in the man being sent to hospital.

This summer has seen an increase in bear activity around the city, said Spizzirri. On average, six bears are killed each year. The fall is usually a busy season, with bears entering the city looking for high calorie foods.

Spizzirri said the summer has been a bad berry year, which could drive more bears near human dwellings as they look for garbage and fruit trees.

Tips for bear proofing your yard include:

To report bear sightings or conflicts with bears please call the BC Conservation Service 24-hour hot line at 1-877-952-7277.

To report a bear attractant to the City Bylaw Officers, contact 250-837-2911 during office hours or email to bylawenforcement@revelstoke.ca.