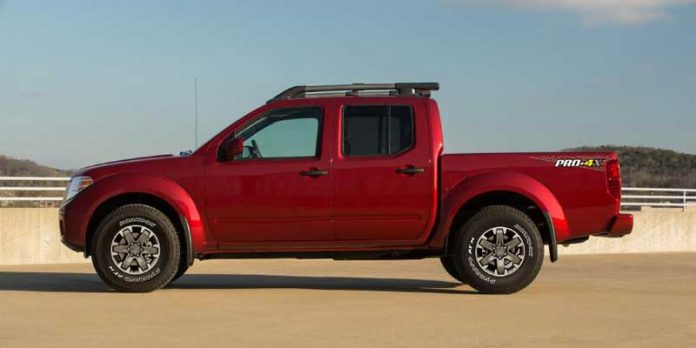 After 15 years with the same basic architecture, Nissan finally plans to replace its aging Frontier pickup truck with a brand new redesign next year.

For now, it is selling the aged truck as a 2020 model with what the automaker says will be a least one of the powertrains in the new Frontier.

After spending a week in the 2020 Frontier PRO-4X Crew Cab with the new powertrain there’s one easy conclusion – don’t buy.

The powertrain is good. It is a 3.8-liter, V6 that produces 310 horsepower and 281 pound-feet of torque and is mated to a 9-speed automatic transmission. The powertrain is a significant improvement over what was the most powerful offering of several choices in the outgoing Frontier.

The pickup is great, the transmission shifts smoothly. In other words, the powertrain is finally competitive with, and is some cases better, than similar offerings in other mid-size trucks such as the Chevrolet Colorado, Ford Ranger and Toyota Tacoma.

It is the rest of the truck that is the problem. Nissan is asking almost $39,000, including the destination charge, for the 2020 model Trucks.com tested. That’s about $2,000 more than a similarly equipped Ford Ranger. And although the Ranger – based on a European model – isn’t a brand new design, it still beats the 15-year-old Frontier architecture.

The Frontier has a cramped cabin. It lacks what are now basic features such as Apple CarPlay and Android Auto. It has one USB port to satisfy a careful of people living in the digital age. The so-called 7-inch dash screen is smaller than a typical iPhone. The bottom line – this is a new powertrain in an ancient truck.

But does that mean truck buyers should ignore the Frontier? No! There is good reason to buy the truck, just not the one Trucks.com tested.

The great attraction of the current model is that it is the least expensive new truck on the market. It is a great choice for the budget conscience.

Hunt for the standard bed, extended cab 2019 Frontier with the four-cylinder-engine. This is a rear-wheel-drive model. With minor, but important options such as splash guards, a bed liner and floor mats, it sells for a bit more than $22,000 plus tax and registration fees. That will be thousands less than a similarly equipped Colorado, Ranger or Tacoma. To be sure, those other choices are better, more capable vehicles but they are also a lot more expensive. There are still lots of the 2019 Frontiers around. The 2020 model, which will only have the larger engine choice, doesn’t go on sale until July.

The automaker will have less expensive 2020 configurations.  A rear-wheel-drive crew cab starts at about $29,000 including the destination fee.

Still, Nissan buyers who are looking for a bigger and more polished Frontier are best to wait a year for the full redesign to make its appearance. Nissan has provided almost no information about the upcoming truck. But the automaker does know how to build pickups and is a major player internationally. It’s Nissan Navara sold in Europe and elsewhere is an excellent midsize truck. It also is the platform Mercedes-Benz uses to build the Mercedes X-Class pickup. And here in the U.S. the Nissan Titan full-size truck is probably the best value in the segment, offering the most features and capability in a half-ton pickup for the price. But as for the 2020 Frontier, take a pass.

Driving through France and Spain in a Nissan Navara truck taught us to pay attention to toll roads and speed limits and to be cautious of medieval streets.

N.J.’s best ice cream: The 35 sweetest spots around the state