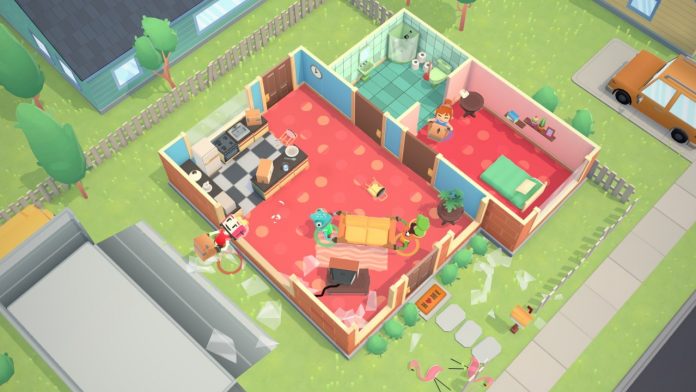 There’s something alluring about a good couch co-op game. Lovers in a Dangerous Spacetime, Gears of War, and most recently Streets of Rage 4 all offer huge doses of fun for friends who want to play together. Heck, the original Overcooked was such a blast that it got an immediate sequel just two years later in 2018. The latest couch co-op game to hit the scene is Moving Out, a quirky and hilarious experience where you assume the role of a moving company employee in an anything goes furniture-carrying frenzy. It’s great fun, even if it’s far from perfect.

The Life of a Moving Company Employee

The premise of Moving Out is simple: You work for a moving company, and it’s your job to load customers’ precious belongings onto your truck. That’s it. Simplicity is key in a game like this, and anything more complex would likely take away from the overall charm of the silly antics.

Small items can be carried by a single player, while larger items require multiple people to carry. A large loveseat or refrigerator, for example, can be dragged very slowly by one person, but it’ll take two to make actual progress in getting the thing out the door.

That’s when the comedy of Moving Out kicks in. There’s so much stuff all over the rooms and floors that maneuvering bigger, bulkier items with a buddy can be quite the challenge. You’ll be bumping into things, getting stuck in doorways, and yelling at your teammates to pivot while moving the couch. The twisty-turny, maze-like level designs are a major part of the fun and navigating around these awkward structures makes for some truly bonkers moments.

It’s not just about getting stuff out of a house or apartment, though. You also have to fit everything into the truck. With a limited amount of space, you’ll have to squeeze oddly-shaped furniture into the truck, Tetris-style. You can also throw items, which will allow them to rest on top of other items. Even larger items can be tossed, and it’s pretty funny tossing an arcade cabinet on top of a couch or table.

It doesn’t take long at all for Moving Out to introduce strange obstacles. Ghosts living in haunted mansions will grab you and make you respawn far from where you were at. Button-activated doors and bridges require you to find items to place on top of switches. You’ll have to run through traffic while carrying pinball machines. There’s even a level where you have to cross a river by walking on logs and crocodiles. There’s a puzzle-like element to Moving Out that really enhances the overall fun and challenges you to think outside the box.

Communication is an important part of Moving Out. You’ll shout, “Get over here so we can move this table!” or, “Okay, let’s switch. I’ll grab that side and you pull this side instead!” You’ll probably also point at the screen a lot. Moving Out doesn’t feature online co-op, but this is really the type of game you play with friends and family in person anyway because playing online wouldn’t really capture the magic and silliness of something like this.

Moving Out isn’t rooted in realism — I mean, the cast of playable characters includes a chicken wearing jogging gear and a… person(?) with a toaster for a head. On top of that weirdness, the game is all about wrestling with unsteady physics. You’ll bump into things, lose your grip on items, and get stuck on doorways. Truthfully, it can get frustrating after a while, especially if you’re shooting for a fast completion time.

The game’s 50 levels task you with carrying items from houses, apartments, and office buildings to your truck within a set time limit. Depending on how quickly you get all the items onto the truck, you’ll earn either a gold, silver, or bronze medal.

There are also additional challenges in each stage, such as tossing a ball into a hoop or getting a bandanna-wearing turtle to follow you onto the back of the truck. These challenges aren’t initially visible, but they’ll pop up on the post-level screen once you’ve finished a stage. Here you’ll see if you actually completed any of the challenges. If not, it’s kind of enticing to go back and play finished levels again to try and beat these challenges.

Completing challenges awards you with tokens which unlock arcade levels. These levels add a crazy twist to the gameplay of Moving Out, such as taking a couch across a narrow path over a pitfall with another player. The arcade levels are highly challenging affairs and make for some fun little distractions outside the main stages.

You’ll quickly find out whether or not you actually want to complete certain challenges and arcade levels. While Moving Out is a lot of fun for the most part, it can definitely get a little tedious. The gameplay loop doesn’t evolve much, and you’ll find yourself doing the same things over and over again. That’s why it’s important that you play this game with at least one other player.

I’d also like to make note of something, because I think it’s important to address the gigantic elephant in the room — or in this case, in the nation. At this time, everyone’s aware of the self-isolation practices that aren’t just encouraged but required for a lot of folks. As such, depending on your living situation, your mileage may vary when playing Moving Out.

I played through the game with my nephew because he’s visiting from out of state and hasn’t been able to go back home, so it kind of worked out. Moving Out is, for all intents and purposes, a party game. Sadly, right now, no one’s having any major get-togethers, which is a shame because that’s the exact environment where a game like this would shine. Depending on your situation, you may only be able to play Moving Out with just one other person. On the plus side, having just one co-op buddy still makes for a really good time.

The bright, cartoon-like graphics of Moving Out give the game a fun, oddball appeal. Some environments can start to look a bit generic, but the overall vibe of the game is chill and lighthearted. It’s the characters that really stand out — or rather, the character animations. Seeing the nervous anthropomorphic critters hopping and running around all jittery-like is really funny.

The music in the game consists of ‘80s-sounding synth and new wave tunes. This musical choice is kind of strange (even though I personally enjoy ‘80s new wave), but the beats are catchy enough and add to the frantic, physics-y nature of Moving Out.

You’ll have a lot of fun with Moving Out if you’re playing friends or family members. The game should absolutely be played with at least one other person, because that’s how you’ll have the most fun with it. Even then, this isn’t the type of game you sit down and play for four to five hours at a time, even with the optional challenges and bonus levels. Moving Out is a lot of fun in bursts, it’s bizarre and goofy, and it’s hilarious. Above all else, it’s just a really good couch co-op expeience.

GM’s mask operation: a glimpse into the factory of the coronavirus...